The Waverly Gallery by Kenneth Lonergan 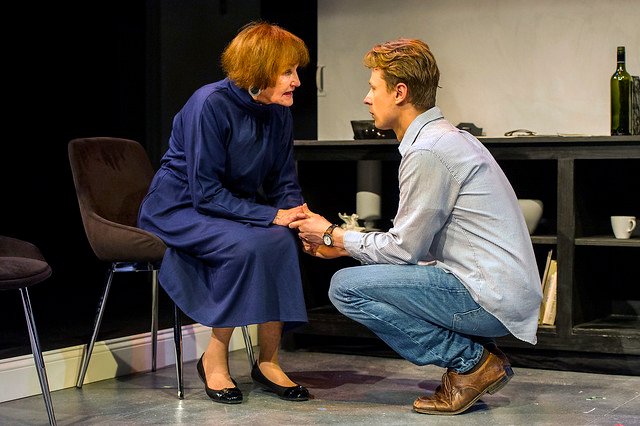 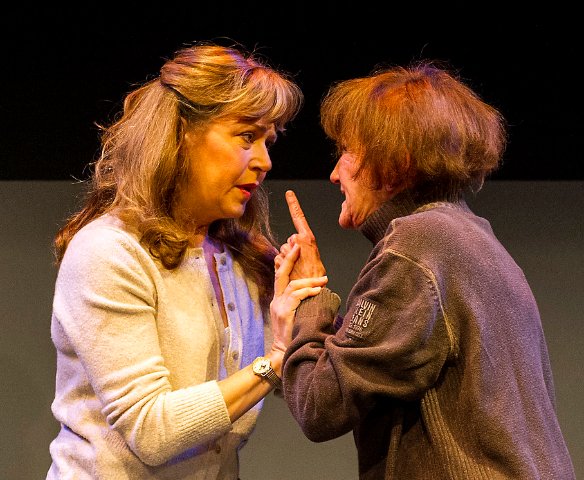 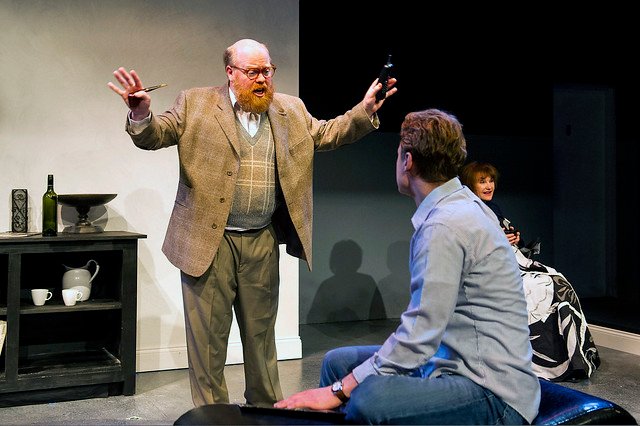 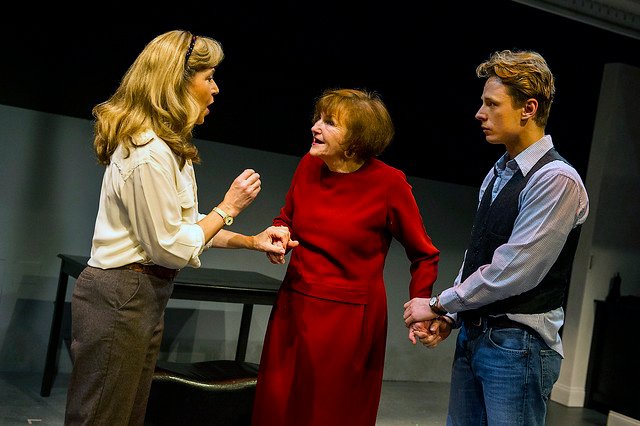 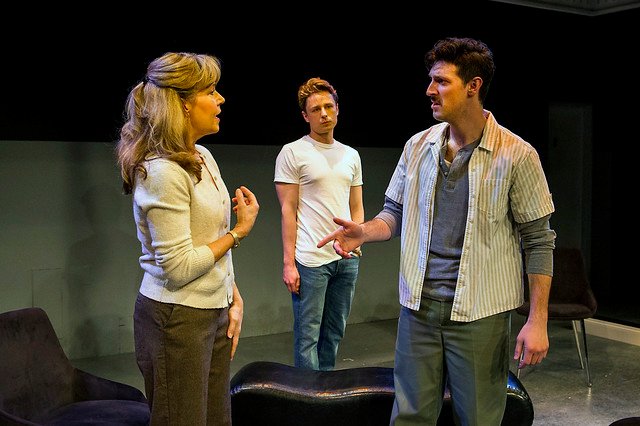 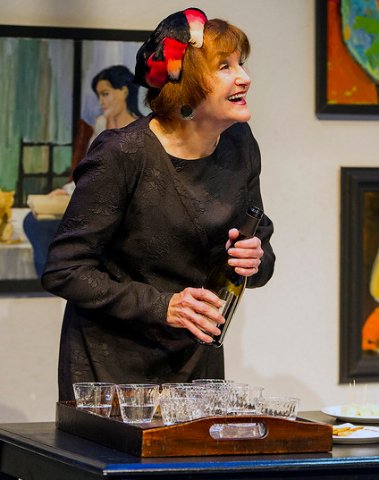 With bold risk taking Shakespeare & Company has launched its season with a harrowing, emotionally demanding family drama. The tensely taut and challenging play is returning to the Berkshires.

The drama by the renowned playwright, Kenneth Lonergan, directed by Scott Ellis, had its world premiere at Williamstown Theatre Festival in 1999. That production moved off Broadway. The Pulitzer nominated play was revived this past season with rave reviews for Elaine May as the dementia inflicted gallerist and former attorney Gladys Green.

Under the sure hand of founding artistic director, Tina Packer, with Michelle Joyner as associate director, it is mounted with momentous impact by Shakespeare & Company. Yet again, the redoubtable Annette Miller, with nuance, comic flair, sweat equity and sizzling insight has taken on the shattered glass of Gladys Green.

Given the median age of Berkshire audiences many will relate to the deterioration of Green and its devastating impact on her immediate family. It entails a long (two hours and fifteen minutes) evening of theatre.

That’s what we experience during the exposition of the first act. There is so much repetition that it gets tedious. Time seems to stand still and we want to move on but are locked in. The narrative advances in agonizing increments but that’s the point being made. Tedium captures the essence of dementia and how it exhausts the patience of family members.

As we meet the family, grandson Daniel Reed (David Gow), daughter Ellen Fine (Elizabeth Aspenlieder) and her husband Howard Fine (Michael F. Toomey) it is stated that they are a secular, Jewish, upper middle class family.

They have the means, never explained how or why, to sustain the lifestyle of Gladys. Formerly an activist attorney who got out of Nazi Germany just in time she now runs a boutique vanity gallery in Greenwich Village. It’s attached to the seedy Waverly Hotel within walking distance of her apartment. Her grandson lives down the hall.

Back in the 1960s, during visits to the Village folk music scene and Washington Square Park, I stayed at the hotel and recall a small art gallery. It was probably some iteration of the turn of the century Hotel Earle. The street was named for Sir Walter Scott’s 1833 novel “Waverly.”

The work that Gladys shows is numbingly amateurish. The semi permanent display entails paintings by an artist who more or less abandoned them and relocated to Paris. There are few visitors and nothing sells. Outside there is drug traffic and shady characters. Cops dropping by state that it is dangerous for her to be alone. She describes problems with some visitors.

The primary function of the gallery is to give her something to do. As her mental condition declines Gladys is increasingly reliant on family support. During the dead of winter there are irregular hours not that it really matters.

On Wedesday nights Gladys attends uptown family dinners. These get out of hand as they all talk at once and don’t listen to each other. There are issues with her malfunctioning hearing aide. Her son-in-law, Howard (Michael F. Toomey), yells at her to be heard. The volume level is also annoying to the audience.

Even when not shouting at Gladys he might take it down a notch or two. His character never made sense to me as either husband or father. There was a disconnect. That lack of synergy also made it difficult fully to understand Ellen and her fragile relationship to Gladys. The daughter dreads the inevitable day when Gladys can no longer function on her own.

There is the expense of having care providers for Gladys. They assure that she gets a daily insulin shot. But Gladys, who is fiercely independent, doesn't like them hanging around saying nothing.

The option of assisted living is floated but, not surprisingly, Gladys can’t stand the company of old people. There is also the question of expense.

Enter the wild card of this roiling home brew. Don Bowman (David Bertoldi), a wannabe artist from Lynn, Mass. drops in to show the gallerist his pictures. One is of his invalid sister who lives in New Jersey. He had hoped to stay with her but has ended up sleeping in his Lincoln.

Gladys, who has no eye for talent, is charmed by the dreadfully inept work. As a card carrying lefty do gooder, learning that he is homeless, she offers an option. Perhaps he can purchase a folding cot and sleep in the small back room of the gallery.

The family is furious about her taking in a stranger. There is a meeting and it ensues that Don may be useful. He provides some companionship for Gladys. So the arrangement works and Don even has his dream come true.

The work is hung and he is given a one man show in Greenwich Village in New York City. To a disco beat he dances around the gallery. The house came down when always game Gladys joins him. It’s the comic highlight of the evening and the audience burst into applause for the always amazing Miller.

The gallery opening is a bust. Gladys keeps pouring wine but nobody comes. Don stares out the window at people passing by. We learn that he wants $2,000 each for the small canvases and $3,000 for the big ones. Gladys wants to buy one and give it to Dan to brighten up his apartment.

The relationship between Dan and his grandmother is tender and well crafted. His father harrases him about his crazy girlfriend. There are endless lines about “are you still seeing her?” Gladys thinks he is a reporter for the New York Times. He keeps denying that but eventually just gives in. Don falsely thinks that Dan can get him a review.

The well calibrated performance by Gow conveys deep love and escalating concern for his grandmother. Lonergan has created the device of Dan stepping out of the frame of the set and serving as narrator. Her life is important to him and he is keeping a diary. Those intimate moments with us are the most engaging of this production.

The fragile balance of her daily life is thrown off when the landlord, owner of the hotel, offers a five month eviction notice. She must be out by April and the space will be renovated as a breakfast café for the hotel. The family begs to no avail for an extension.

That’s  backdrop for the downward spiral of the second act. As in real life there is no happy ending to this drama. When Dan and Ellen hug in melancholy mutual support we wonder if the disease will pass to the next generation. If that happens Ellen states “Put a bullet in my brain.”

For production values in the small theatre the option was to keep it simple. The set entails a few chairs, couch and tables. A modular back wall, designed by Julianna von Haubrich, rotates to transform from gallery to the Fine’s uptown apartment. Lighting by James W. Bilonski and Sound by Brendan Doyle were appropriately unobtrusive. Elizabeth Rocha did a particularly good job of dressing Miller.

Yet again kudos to the remarkable Miller. She always brings something special to performances. This may have been the most demanding and difficult role we have seen her in.

While in a dizzy downward spiral she must convey a complex back story. During summers on Fire Island she was the hostess with the mostest. With dementia resulting is the disintegration of her persona there are horrifying flashbacks of life in Nazi Germany. That echoed through her commitment as a social justice attorney and activist.

We must understand her as a formidable woman warrior suffering a total breakdown. The worst aspect of dementia is the manner in which it deprives one of dignity. It is heart wrenching to see her clinging to hope.

Faced with the demise of the gallery she has a fantasy of selling the business, opening a small office, and going back to her law practice. In an emblem of confusion she states that she still has her “passport.” It had me choked up to hear that.