Dream Away Lodge in Becket 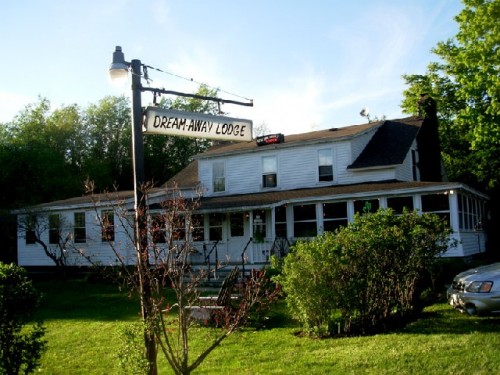 The Dream-Away Lodge is hidden deep in the wood of Becket, Mass. 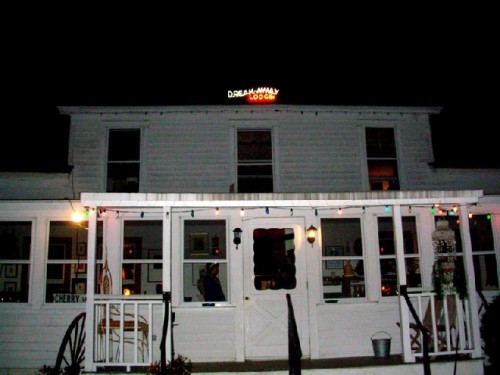 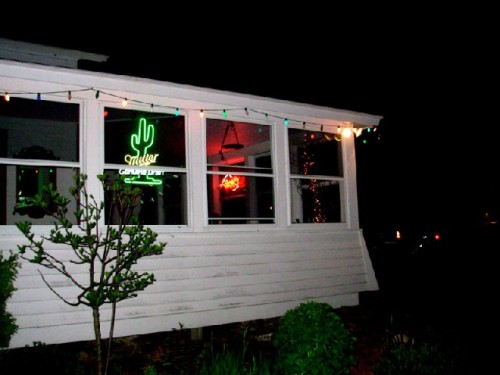 Outside the lounge area. 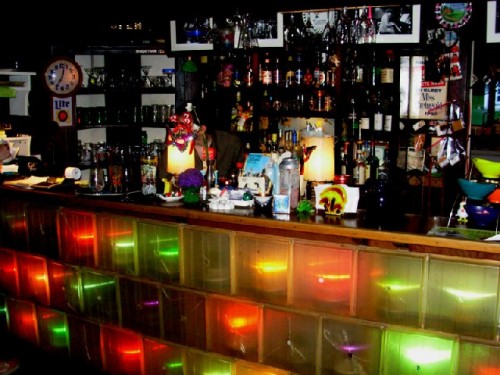 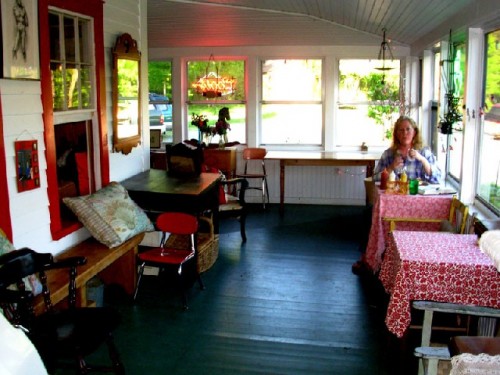 A view of the porch. 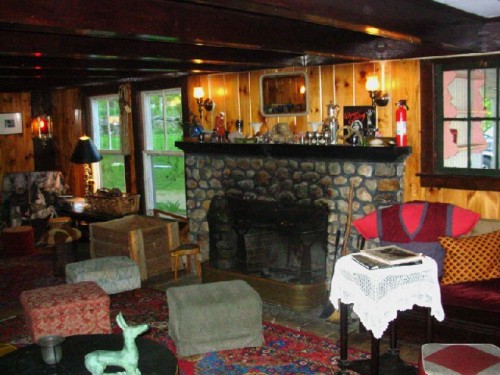 In the winter folks gather round the hearth. 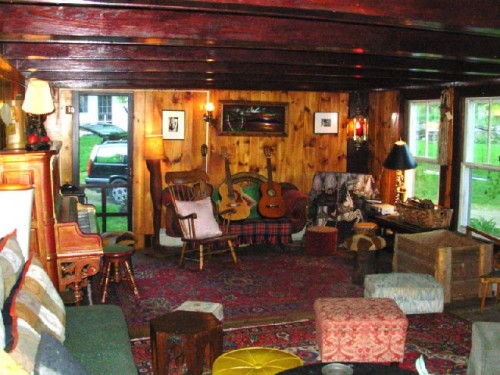 This area is packed when musicians perform. 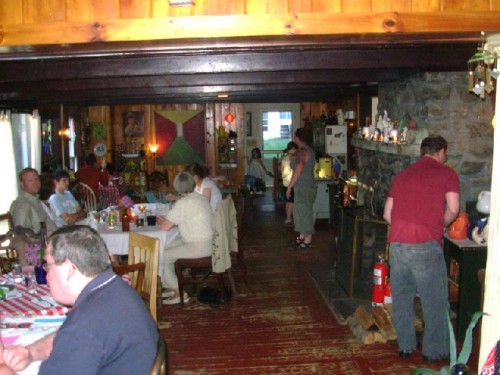 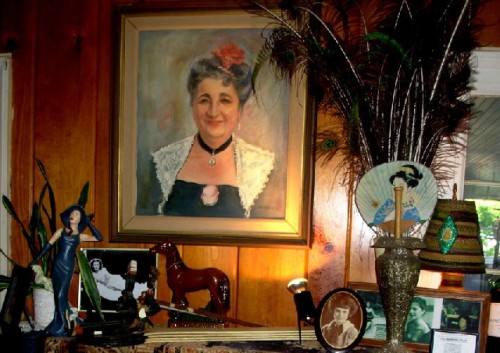 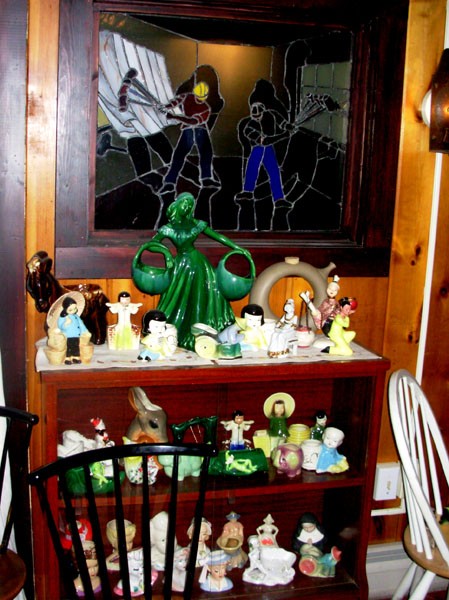 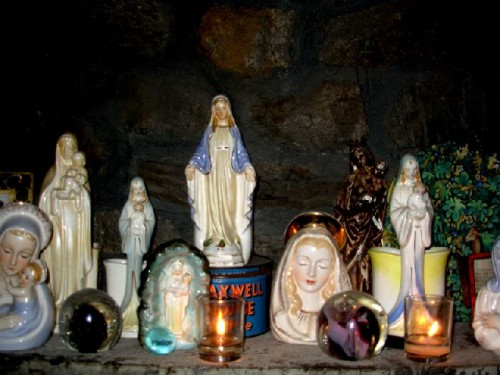 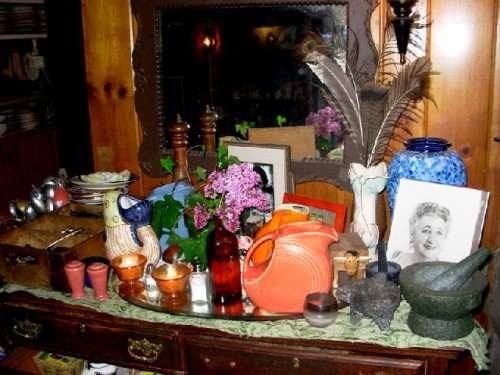 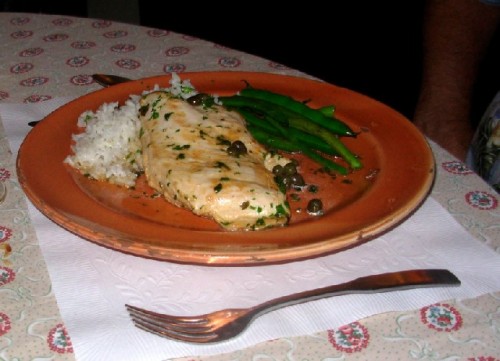 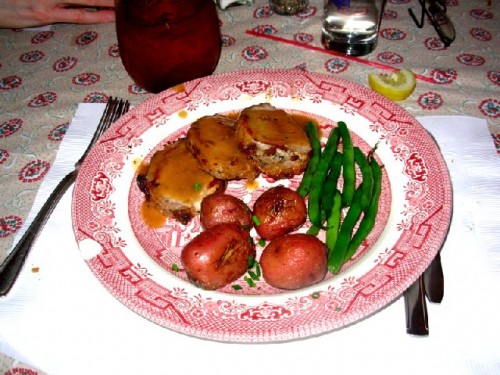 A plate of roast pork.

Becket, Mass. is best known as the summer home of Jacob's Pillow the internationally renowned dance program. Back in the 1940s the dancers discovered the Dream Away Lodge deep in the woods at the edge of the October Mountain State Forest. It became a hangout for artists, musicians and performers visiting the Berkshires.

Legend has it that back in the day there was a large hunting lodge nearby where wealthy gentleman came for a rural weekend of fishing, shooting game, and sipping single malt scotch while gathered round the hearth. With all of that male camaraderie there was a need for the release of excess testosterone. Allegedly, the Dream-Away was where a randy fellow might relieve that pent up tension. What happens in Becket stays in Becket.

With its cozy, funky décor you don't have to shut your eyes and dream to conjure those bygone days. The Dream-Away has atmosphere up the wazoo. There is definitely a tag sale ambiance with all the tacky collectables. Here and there are portraits of the former owner Maria "Mama" Frasca who bought the Dream-Away in the late 1940s, after its alleged former stint as a gentleman's hangout, and ran it with her daughters Theresa, Leonora and Regina.

The Dream-Away had fallen on hard times when former actor, Daniel Osman, responded to an ad in the Berkshire Eagle, in 1997, and acquired the Lodge. Smartly, he kept the décor intact, probably even adding to the homey clutter, and it is now a true destination for folks seeking a special Berkshire experience. Bob Dylan and Joan Baez filmed on its location during his Rolling Thunder tour and even Liberace dropped by. He must have loved all the kitsch.

In addition to the spacious dining room there is a cozy lounge with a large hearth. People gather round in the comfortable room for evenings of mostly local music and the occasional headline performer. The bar is also a unique feature and one can dine there on an abbreviated special menu if you want to just hang out and drink with just a snack or so for dinner.

The main dining room features a prix fixe of four courses. Like everything else prices have gone up. Initially it was $25 and now it rings in at $35 per person not including tax and tip. They also don't take credit cards so bring cash or check.

Dinner starts with choice of soup, salad, or appetizer. Our table of four all opted for the mushroom bisque which was wonderful but, like all of the courses, a bit small. There were nice chunks of mushroom providing a delightful texture.

For the main course there are several choices that change according to the whim of the chef. In general there is a chicken, fish, beef/ lamb, and vegetarian selection. Our friends who know the Lodge well recommended the pork roast while they opted for the chicken picatta. The pork proved to be tender and tasty with a nice gravy but not the hearty portion that satisfies a hungry man. There were a few fresh green beans and what appeared to be two, roasted, red skin potatoes halved. The funky old plate looked a bit under populated.  We were anticipating the family style bowls of veggies passed around which the Dream Away is noted for. It's what I experienced during a prior visit with a large group of people. The chicken, with lemon and capers, represented an ample boneless breast but had not been hammered flat and tenderized in the Italian manner.

The third course consists of a small, somewhat generic salad, to clear the taste buds for a selection of deserts. I enjoyed the brownie Sunday while others ordered cakes and pie.

Before or after an evening at Jacob's Pillow this is the closest dining option. Overall, this as comfort food served family style. It is fairly close to having friends over for dinner. Be sure to call for reservations as the Dream Away is fully booked in season. And get direction as it is hard to fund with all those dark windy roads. Which is probably why, back in the day, it was a great roadhouse for a boy's night out.  But, nowadays, you can bring the kids.