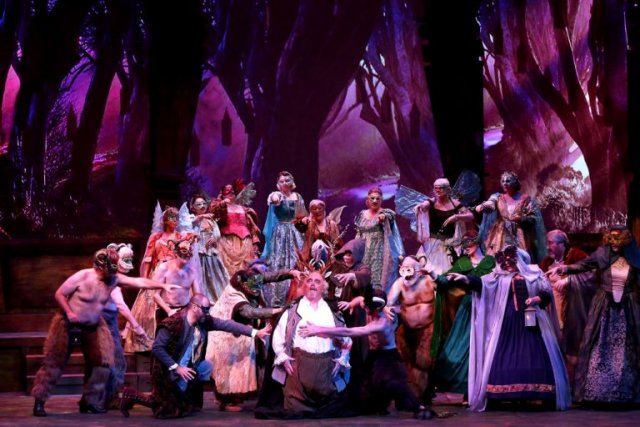 Richard Zeller as Falstaff with chorus.

Falstaff holds a unique position among Verdi’s operas. It was his final work and one he toiled over for several years. With the exception of the failed and barely mentionable early work, Un Giorno di Regno, it was his only comedy. And musically, while it lacks “Top 40” hits, the score is highly inventive. The composer incorporates all the tricks from a lifetime of musical mastery and adds some more. His variation of texture and rhythm are pronounced and especially realized in ensemble pieces.

We are fortunate that smaller opera companies in the Bay Area take risks in producing outside of the old war horse catalogue, and comedies like Falstaff present particular challenges. Timing of delivery, accuracy of expression, enthusiasm of affect, and versatility of voice all must be heightened. However, one advantage of performing in a smaller house is that the necessary exaggeration is more visible to the audience. As a result of excellent casting, attractive visuals, and fine musical and stage direction, West Bay Opera offers a special treat with its glorious Falstaff, based on Shakespeare’s The Merry Wives of Windsor, with libretto by the distinguished Arrigo Boito.

Verdi admired Shakespeare and had successfully adapted the Bard’s work, early in his career with Macbeth, and much later with his penultimate opera, Otello. Although the dark tone of Otello sharply contrasts with the brightness of Falstaff, the former acted as a musical precedent to the latter with its through-composed form. With this format, no melodic repetition occurs. So in the absence of set pieces with memorable tunes, the ear is treated instead to endless anticipation and variety.

Verdi was no doubt drawn to the bigger-than-life character of Falstaff. Lecherous and self-indulgent, he is one of the great comic characters from literature. Today, he can be viewed as a social throwback in the context of the #Me Too Movement. Although he didn’t abuse power of position to entrap women, he did use inducement and deception to compromise them, and in the vernacular, he was simply a dirty old man.

The sum of the central plot is that Falstaff sends love notes to two married women, Alice Ford and Meg Page, who are friends and learn of the duplicity. They turn the tables on the perpetrator who is duly spurned and humiliated. A secondary plot is that Master Ford has arranged for their daughter Nannetta to marry the older Dr. Caius, but she loves and pursues the young Fenton. The momentum of the story is a little slow to develop, and by the time closure arrives, it seems to drag a bit. But it moves along nicely during the bulk of the action with great energy.

The dominant tone of the music is lively and punctuated by a number of highly animated, rapid ensemble pieces such as the complex women’s a capella patter quartet in which they vow revenge against Falstaff. Another highlight is the more complicated double quartet in which men sing of their search to foil the young lovers Fenton and Nannetta, while the women show support for them, and the lovers sing above the fray. These brisk ensembles are delivered with remarkable skill and aplomb.

Some aria-length solos occur, which are often reflective, particularly Ford’s wonderful soliloquy about his love for . But in keeping with his new direction, Verdi does not yield to recurring melodic phrases which mark the beloved arias of his middle period. While this may disappoint some listeners, Falstaff is a masterpiece within its paradigm.

The cast of the production excels from top to bottom. The success of the production rides first on the able shoulders of Richard Zeller, a classic Falstaff. With the aid of costumery, makeup, and wig, he looks the part of the corpulent rogue, but his commanding presence and ebullient acting yields the required brio and debauchery. Of course, the proof of the pudding is in the singing, and Zeller charms with a playful high end, a strong and clear middle, and a resonant low.

Another fine performance comes from Taylor Haynes, a talented lyric soprano on the ascent who sings Alice Ford with a warm yet penetrating voice. An entertaining role in some operas is a contralto servant type who is a nanny or maid. The proxy for that type in Falstaff is the mischievous Mistress Quickly, and Patricia Houston nails the characterization. Finally Conductor José Luis Moscovich orchestrates the elaborate musical elements with total command.

Staging is highly effective given physical constraints of the performance site, with Stage Director Ragnar Conde coordinating the piece. Set Designer Peter Crompton and his Projection Co-Designer operate from a previous stage template with columns, step-ups, and back-lit projections. This version works particularly well with a variety of backdrop imagery, some of which provide visual depth to the stage as well. Abra Berman’s exquisite costumes for principals and chorus not only satisfy the need to clothe performers in period garb, but they add a welcomed visual dimension to the stage.

Falstaff with music by Giuseppe Verdi and libretto by Arrigo Boito is produced by West Bay Opera and plays at Lucie Stern Theatre, through June 2, 2019.