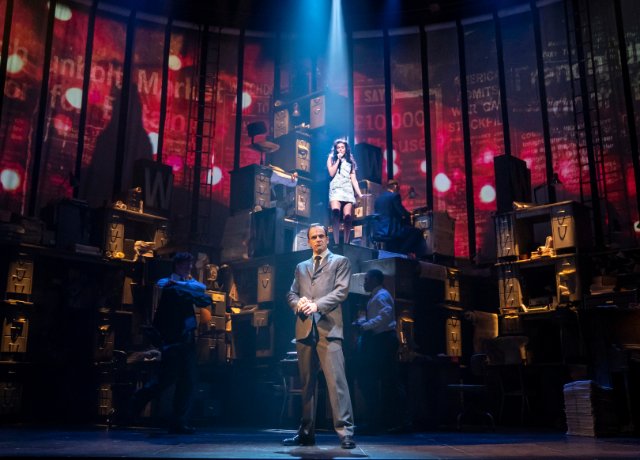 Rupert Murdoch is either a villain or a hero depending on how you view the Fox network and its politicalization of the news.

But how did it all start?  Ink, the new play by James Graham at the Samuel J. Friedman Theater, goes back to early in his career. In 1969 he bought the British daily whose circulation was four times that of  The Sun.

But Ink is not just about Murdoch; it is actually more about Larry Lamb, the man he brought in from a northern England city where he had been editing a paper, to edit The Sun and overtake its rival.

It is the story of the two outsiders – Murdoch from Australia and Lamb, who was never accepted by status conscious London journalism. He had left a London paper when it became clear he could not succeed. (He was definitely working class). Now he is back and, as the modern saying goes, “ready to kick ass.”

And it is also the story of how easy it is to, step by step, justify actions until you have lost your moral compass totally.

For at the beginning, Lamb is an ethical journalist; he feels responsible to the readers. But he begins to adapt Murdoch’s view that journalism is not about giving the people the information they need to know but what they want to know and what will sell. So if that means topless girls and sketchily factual scandals, so be it. The circulation war is everything.

If Murdoch seduces Lamb with his vision of the news and his drive to be number one very quickly (within a year), Lamb seems easily seduced. The idea of showing up the “establishment” that he could not crack is much too much appealing. He is a willing puppet who soon needs not to be manipulated.

Certainly the tabloid press and the partisan press have been around for centuries; in the US, we had Jeffersonian newspapers and Federalist newspaper- each attacking leaders in the most disrespectful and usually invented ways. In the late 19th century, “yellow journalism” focused on scandals and crime.

This British import stars two terrific actors that you may never have heard of: Bertie Carvel as Murdoch and Jonny Lee Miller as Lamb. They are surrounded by a fine cast. Carvel makes Murdoch a contradiction: prudish and amoral. The game of beating the competition is everything, but there comes a moment when the ethical man shows through. It is, by then, too late.

Miller’s portrayal of Lamb shows a man taking small steps of compromise to his ethics until there is no turning back. He goes from colleague and pal to his staff to slave master; he quickly picks up Murdoch’s ability to manipulate people and uses it widely.

What seemed like a game initially becomes deadly serious when the paper covers the kidnapping of the wife of Murdoch’s deputy. It seems they were driving Murdoch’s car while he was in Australia. A sensational story and Lamb must decide if and how to cover it. His decision on some level shocks Murdoch.

Ink is a fast paced show as directed by Rupert Goold, so much so that at times the dialogue can be difficult to hear between the British accents, the speed and the ambient sound. It helps if you are somewhat familiar with journalism.

Bunny Christie has created a set that includes boxes piled high with desks on various levels and dozens of front pages forming the backdrop. It is complex and inventive though it does reduce the playing area somewhat. The lighting by Neil Austin highlights the playing areas and the drama.

Adam Cork has created original music and the sound design. Yes, the cast does break in to a song or two.

Goold’s direction at times is like choreography as cast members crisscross the stage.

The cast is excellent; it is difficult to single one or two performers out from the rest.

Ink is at the Samuel J. Friedman Theatre, 261 W. 47th Street through July 7. Tickets are available through Telecharge.