TON Performs at the Metropolitan Museum of Art 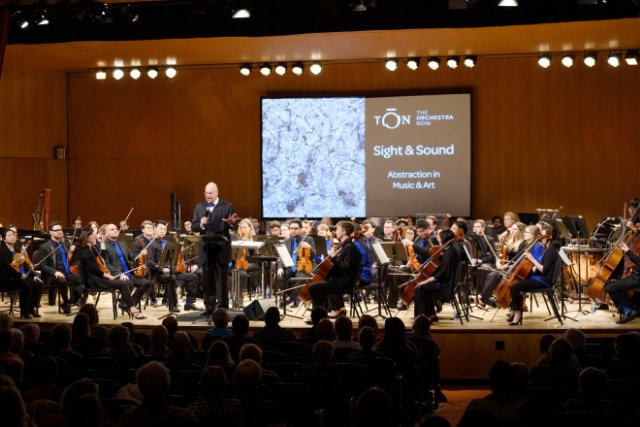 The Orchestra Now (TON) is brave. In taking on two of the seminal composers of modern music, TON tackled the presentation of developing ideas about sound as music to which the 20th century composers have added new dimensions. Some composers took the sounds out of time. Anton Webern often composed suggesting different tempi measure to measure. While Morton Feldman did not go as far as John Cage, inviting musical artists to perform 'whatever, whenever', he often suspended his work out of time. TON musicians find playing this work difficult, but well worth it.  Listeners agreed.

TON is in residence at the Metropolitan Museum of Art for several concerts during this year and next. This concert was tied to Epic Abstraction: Pollock to Herrera, an ongoing exhibit.

In the first half of the program, Leon Botstein, who gathered the orchestra together from recent graduates of the top music schools, spoke to us, offering intermittent orchestral examples. He described artists and musicians meeting over coffee in Vienna and Munich clubs and at the bar of the Cedar Tavern in Greenwich Village.

Webern’s teacher and close friend Arnold Schoenberg, was an intimate of Wassily Kandinsky, who lived in Munich from 1896 to 1914. They discussed new forms available to their work as artists. Each was interested in the other's art.  Schoenberg painted for a while. Kandinsky would write of music: Sound is the soul of form, which can only come alive through sound and works from the inside outward. The form is the outer expression of the inner content."

Feldman was closer to many artists, drinking often with Jackson Pollock, Willem de Kooning, and Franz Kline.  Feldman wrote about the influence of art on his work. About his favorite, Piet Mondrian: If you understand Mondrian then you understand me too. In the beginning I have nothing, in the end I have everything - just like Mondrian - instead of having everything to start with and nothing in the end.(…) I think the big problem is that I have learnt more from painters than I have from composers.

It is hard to compare a painting, or even a sculpture contained within defined lines to music, which can go beyond time and space. Painters and composers both clearly sensed a need for new approaches in a new age. Painters have the frame before them.  Happenings occur within the frame, or on it. Feldman admired Pollock dancing around the canvas on the floor of his Springs studio, dripping paint and feeling that he was in the middle of the work. Feldman ended his close friendship with Philip Guston when the artist returned to figuration. Kandinsky had asked: How far can our freedom go?...as far as the artist's feeling can reach."

A musician is organizing sounds in an open-ended space. John Cage even took sounds off the page altogether. Webern and Feldman did not. Webern is often referred to as a student of Schoenberg’s.  Although they remained life long friends, Webern  took off quickly from the tonal preoccupations of his mentor.

TON, led by the formidable Botstein, played Webern’s Six Pieces and Feldman’s comprehensively titled Orchestra in the second half of the program. Webern lasts at the most 13 minutes; Feldman, seventeen. Form shrinks as tonality is abandoned. Webern did not want to repeat. He shorted pieces so that he didn't have to repeat or sequence.  Eventually Feldman composed pieces lasting four and a half hours to hold us in his thrall.

Six Pieces is classical in form while reaching forward in sound and expression. It relates to Reger,Mahler and Strauss, but in a strange way.  Botstein captured this as he conducted. We could hear the reflecting cells with motifs building both proportion and a melody, not from line but from a succession of chords. Webern came to see that his organization of sound created feeling, not the other way around. As TON performed Webern, melodies arose inadvertently from the placement of sounds in relation to one another.

The interval, not the note, was all important, even as the first melodic lines were passed between harp, solo viola and solo second violin. Not only do we have the customary two dimensions, horizontal (melody) and vertical (harmonics) but we have diagonals. This organization creates the melody. TON passionately performed the similarity in diverse objects and also diversity in the similar. It is not the composer’s. The result in Webern is often achingly beautiful. Feldman was driven further from melody by dissonance.

In Six Pieces, Webern may have been responding to the death of his mother, although program music would be abandoned later on. The sections are labeled with their movement, slow and sometimes massive. Time signatures can change measure to measure. Clearly Sehr massig is funereal, and may even be a funeral march. While time signatures are written in Webern, they are often abandoned in Feldman.

Silences are an element in the music of both composers. Instrumentalists captured them as they might a note or a chord.

Both composers force us to listen more closely. Botstein brought out memory and desire in the music. Our attention was rapt, our listening ear was extended toward the sound and eventually suffused with it.  This experience is not that of listening to a classic composer who comes at us and invites us to journey along.  We are inside the music.

As performed by TON, we experienced a remarkable afternoon of sound at the Metropolitan Museum.