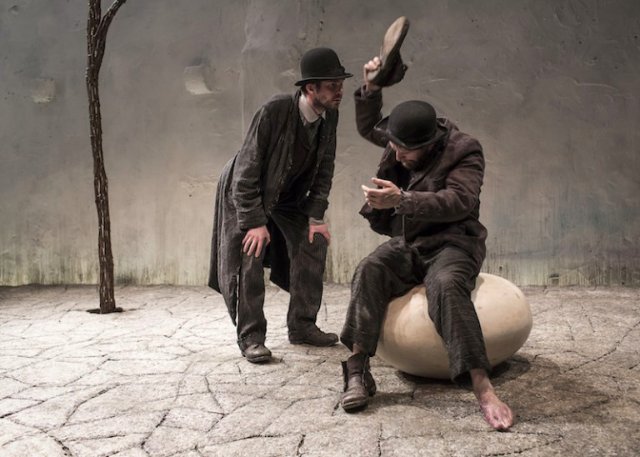 You know the scene. “A country road. A tree. Evening” Samuel Beckett couldn’t have been more succinct in the scenic direction for his existential classic, Waiting for Godot. That tree takes on mythic proportions as the play proceeds.

Druid Theatre of Galway, Ireland, has brought its radiant production of Samuel Beckett’s Godot to Chicago Shakespeare Theater for an abbreviated run. Directed by Garry Hynes, Druid’s artistic director, the play stars four renowned Irish actors. The stars are Didi and Gogo (Vladimir played by Marty Rea with Aaron Monaghan as Estragon), the two souls waiting at a country crossroads for someone named Godot.

The two-act play runs 2.5 hours with one intermission and the two acts mirror each other. Waiting for Godot is a play about nothing happening. Sort of like a Seinfeld episode. Or is it an ode to human suffering and hope? In any case, it’s funny. Whether or not you think it’s about existential dread, it’s very funny. Didi and Gogo wait, wonder, dance, exercise, pass the time in myriad ways. These include some brilliant set pieces, as when Didi and Gogo, having taken possession of another hat, juggle the three hats back and forth from head to head. They also consider how they might hang themselves from the tree. Gogo yearns for food and Didi produces a carrot (and many turnips) from his capacious coat pocket. And then there are Gogo’s boots.

In both acts, they’re visited by two travelers. Pozzo (Rory Nolan), a wealthy man, pushes his slave Lucky (Garrett Lombard) bound by a rope around his neck, on down the road. In act one, they stop to rest and Pozzo enjoys a picnic from the basket Lucky carries. His abrupt orders to Lucky: “Stool!” “Basket!” “Coat!” get dithering reactions from the somnolent slave, until the mood changes. After discussion with Didi and Gogo about Lucky’s capabilities, Pozzo orders him to “Dance!” Lucky jigs about. The next order is “Think!” upon which Lucky delivers a nonsense quasi-theological monologue, beginning with, “On the other hand, with regard to—“

Near the end of each act, a Boy (Zachary Scott Fewkes, a 6th grader from Lake Zurich) arrives to inform them that Mr. Godot will not arrive today, but surely will come tomorrow. “Tomorrow, everything will be better,” Vladimir says. And at another point, Estragon says, “We always find something, eh Didi, to give us the impression we exist?”

The Druid Theatre production of Waiting for Godot is a classic treatment, as required by Beckett’s estate. Companies that obtain the rights to stage Godot are not allowed to make changes in the script or staging.

Most of the crew are also Druid members. Francis O’Connor’s design is enhanced by a beige/gold daytime backdrop that turns to a brilliant dark teal as darkness approaches and a luminous moon floats across the sky toward the tree. (Stage direction: The sun sets. The moon rises.)

At intermission, a crew member comes on stage with a tall ladder, which he mounts and attaches several leaves to the three. (Stage direction: Next day. Same time. Same place…. The tree now has four or five leaves.)

James F. Ingalls’ lighting and Greg Clarke’s sound design are an integral part of this whole. Nick Winston’s movement direction cleverly choreographs the antics of Vladimir and Estragon as well as Pozzo and Lucky.

How do you explain the enduring popularity of Waiting for Godot? I’ve always found its poetry as fascinating and susceptible to new theatrical interpretations as Hamlet. Two recent Chicago productions included Court Theatre’s 2015 staging, featuring an African-American cast, starring Allen Gilmore and Alfred H. Wilson as Didi and Gogo. More recently, Tympanic Theatre Company set the play on the Mexican border and characterized the two hobos as Mexican immigrants to the U.S. (Note: I began that Tympanic review with the same paragraph I used to open this one.)

Beckett calls the play a tragicomedy. He wrote it in French and later translated it into English. The playwright always resisted all efforts to attach significance to the play. He said on one occasion, “Why people have to complicate a thing so simple I can’t make out.” Asked if Godot was another name for god, he pointed out that in French, god would be “dieu.”

Many famous pairs of actors have played Vladimir and Estragon in the past.  Tom Ewell/Bert Lahr, Zero Mostel/Burgess Meredith, Steve Martin/Robin Williams and Patrick Stewart/Ian McKellan. See video clip below of the latter pair in their 2013-14 Broadway production.

Waiting for Godot continues at Chicago Shakespeare Theater, 700 E. Grand Ave., through June 3. Tickets are $66-88 for performances Tuesday-Sunday. There will be two performances on May 26, 31 and June 2.