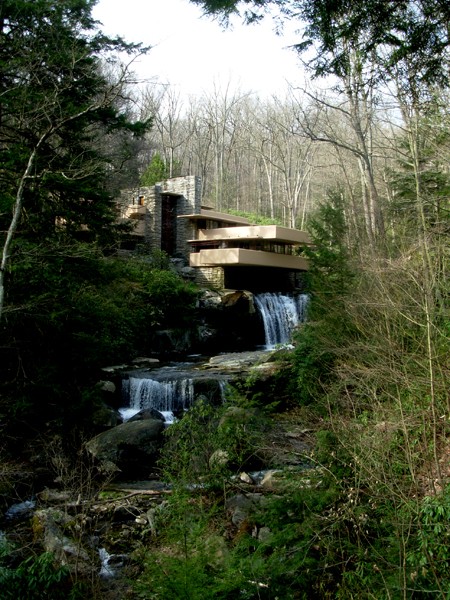 The most famous view of Falling Water. Giuliano photos used with permission of Western Pennsylvania Conservancy. 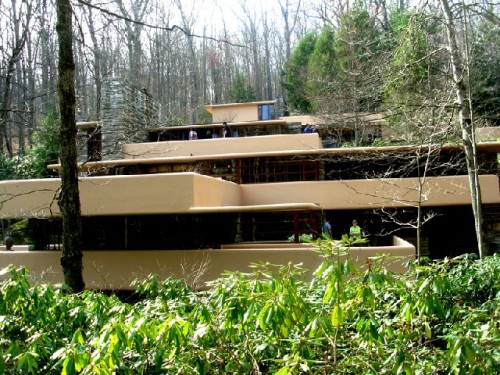 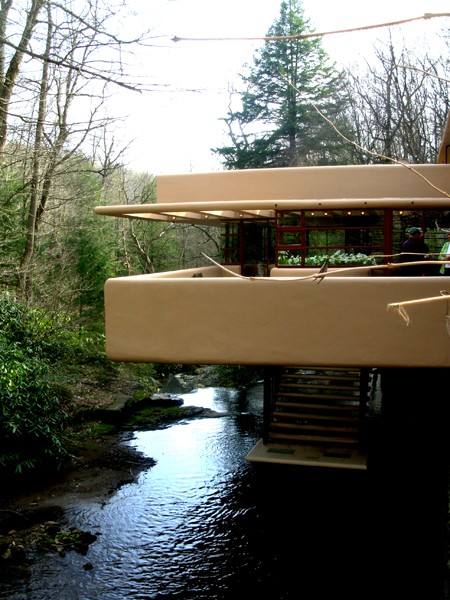 The terraces extend over the water. 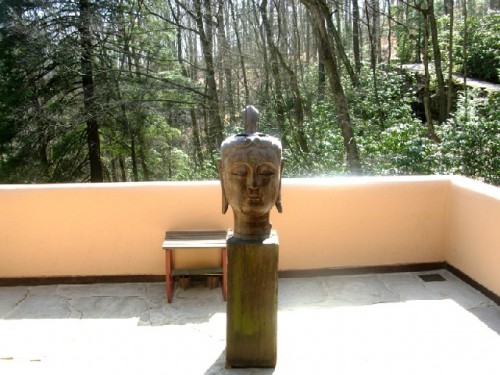 Contemplating nature from a terrace. 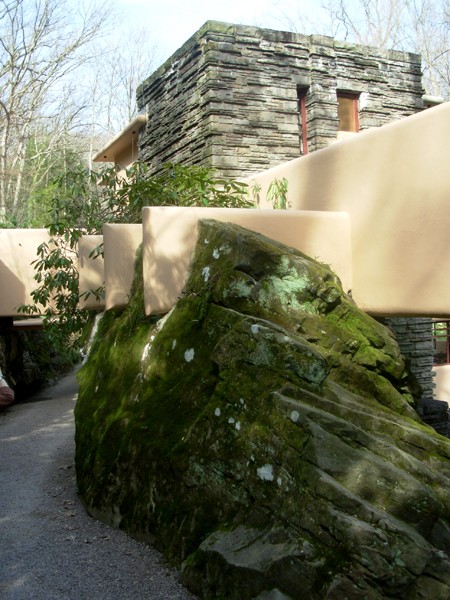 The house is anchored into the boulders over the falls. 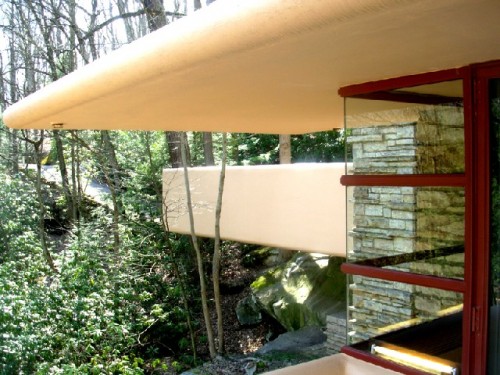 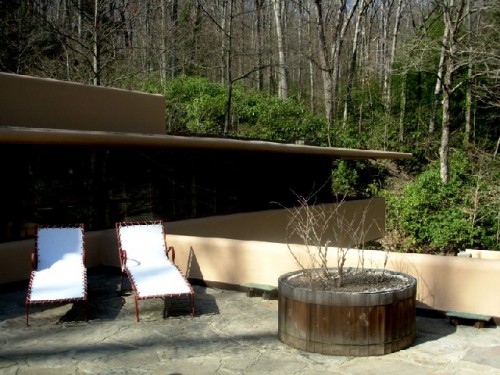 The family spent much of its time on the terraces. 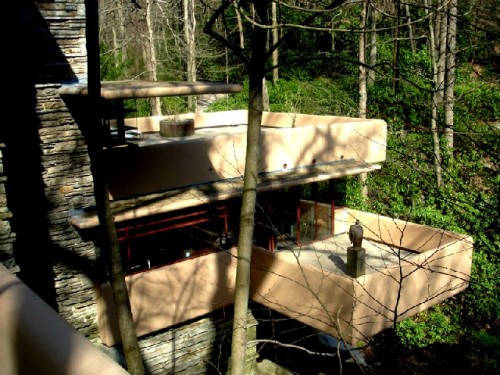 Looking down at the terraces. 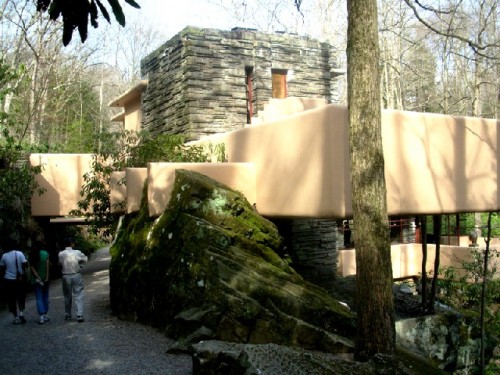 A rear view of Falling Water. 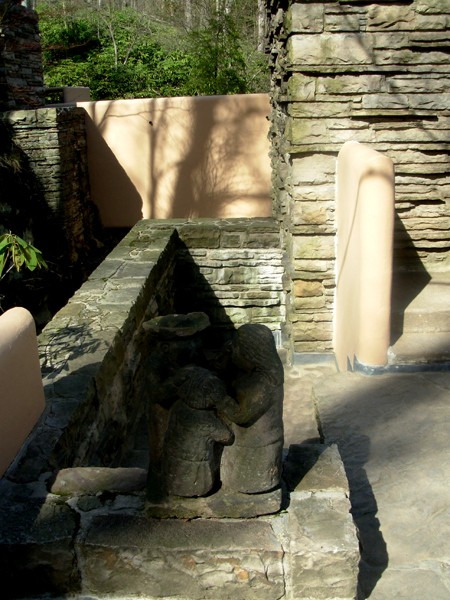 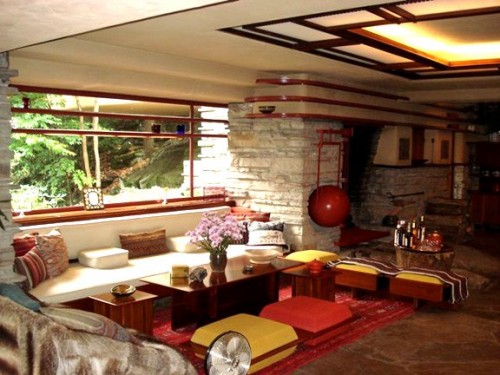 The open plan of the living room. (Wikipedia photo) 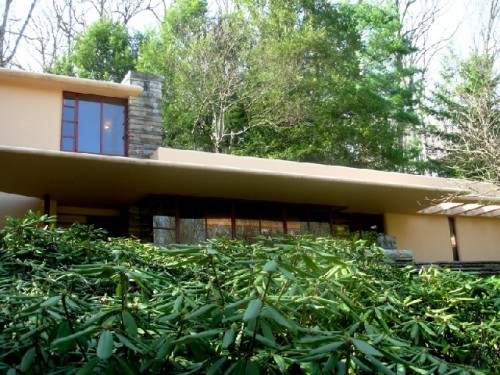 The guest house seen from below. 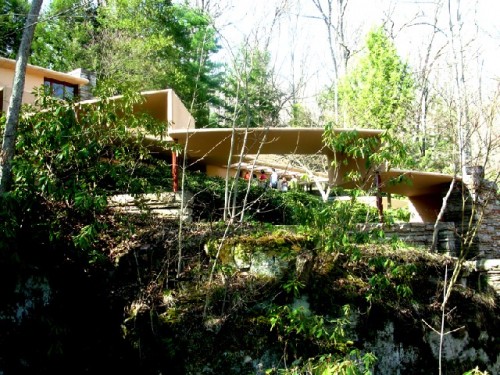 The path and overhang connecting to the guest house. 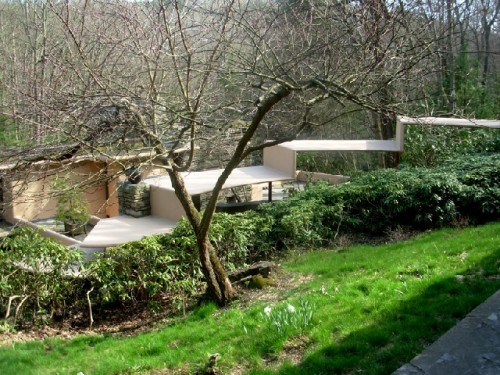 Looking down from the guest house. 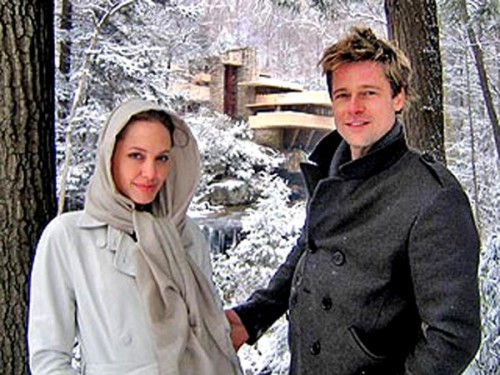 Brad Pitt and Angelina Jolie during a December, 2006 visit to Falling Water. 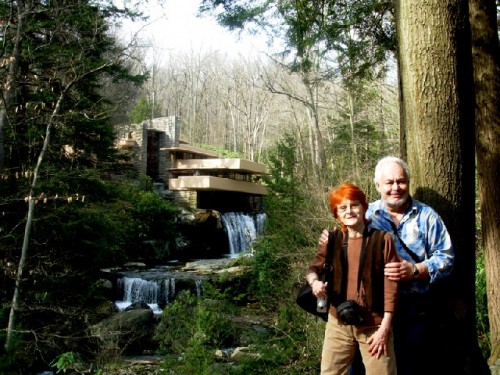 Charles and Astrid during their May, 2008 visit to Falling Water.

It was late afternoon when we arrived in time for the last daily tour of the  1935 home and weekend retreat, Falling Water, which Frank Lloyd Wright designed for the Pittsburgh businessman, Edgar J. Kaufmann, Sr.

After some hard driving on the often delayed Penn Turnpike, Mill Run was to be our first stop of three weeks of travel which clocked 3,800 miles from the Berkshires to New Orleans and back. Fallingwater was one of two greatest American architectural treasures we explored. The other was Jefferson's Monticello. So this provided the unique opportunity to compare and contrast these remarkable masterpieces. Both houses revealed design features and innovations tunique to these projects. The Jefferson home is a complete projection of his character and vision as a founding father and man of the Enlightenment. While Fallingwater represents the result of a complex relationship and aesthetic struggle between a genius architect and a patient, enlightened client.

Wright was a notoriously autocratic architect who reportedly threatened to withdraw from the project when he learned that Kaufmann consulted with engineers about the stress specifications for the famous reinforced, steel and concrete, cantilevered balconies. They suspend over the water fall of Bear Run below. From the beginning, they proved to be problematic and the Western Pennsylvania Conservancy, which now owns the house and surrounding extensive woodland, has completed a complete structural reinforcement and renovation of the home.

Often Wright's visionary design was not in sync with the technology of the time. His New York masterpiece, the Guggenheim Museum, for example, is currently undergoing extensive renovation and exterior resurfacing of its poured concrete. Because the house is sited directly over the waterfall Mr. Kaufmann was quoted as referring to his home as "a seven-bucket building" and gave it the nickname "Rising Mildew."

The house  was built in 1936, in the midst of the Great Depression, for $155,000. This figure represents $75,000 for the main house, $22,000 for furnishings, $50,000 for the car port and servant's quarters, and an architect's fee of $8,000. Adjusted for inflation it would come to $2.3 million today. Which is about the cost of the average run of the mill, but not Mill Run,  McMansion. For what appears today to be a rather modest cost the Kaufmann family commissioned a project which has earned them a memorial in architectural history. Fallingwater has been widely acknowledged as one of the singular private homes of the 20th century.

While the famous long view of the structure reveals the generous expanses of terraces, encouraging an extension of living from inside to out in nature, the interior proves to be rather tight and constrained. The bedrooms are surprisingly small and designed simply for sleeping and not for the kind of hanging out that most of us prefer. There is minimal closet and storage space and Mrs. Kaufmann is described as having to greatly reduce her wardrobe and household items.

The living room, dining area follows the open plan which was revolutionary for its period. It is created around the great stone hearth which, like the floor and other exterior elements, was provided from a quarry on the property. The house is literally built into the boulders of the falls which it is anchored to. One of these massive stone formations rises through the floor next to the hearth as a signifier of the presence of nature.

From the living area there is a set of stairs which descends to a platform over the falls where Mrs. Kaufmann could literally get her feet wet. Opening the door also allows the sound of rushing water to pervade the living room. Significantly, the mostly small windows, designed to open without a central post or framing, afford only glimpses of the falls and nature. Wright demands that the family live on the terraces with their dramatic views.

As in all Wright homes he designed most of the interior furnishing much of which is built into the structure. One accepted his plan and style of living. During the house tour elements of Mrs. Kaufmann's understated rebellion are pointed out to visitors. There are a few examples of their taste in fine arts including several Japanese prints given to them by the architect.

From the main house one climbs up stairs, with a Wright designed, poured concrete overhang, to the guest house which is created with the same materials and attention to detail as the primary structure. There is a small outdoor swimming pool which is fed by a mountain stream and suitable for a refreshing dip on a summer day.

With its stone floors and placement over a waterfall, in that era before AC, the house must have been refreshing during the heat of the summer. It is important to realize that this was a vacation and weekend home some 50 miles from Pittsburgh on the less accessible roads of that period. Because this was not the primary residence of the Kaufmann family perhaps they were disposed to "roughing it" in responding to the limitations, as well as, the advantages of nature, which Wright imposed on them.

Initially, the site was chosen because the family enjoyed picnics on the boulders over the falls. There were several cabins that were deteriorating when they commissioned Wright to come up with a design. Kaufmann assumed that the house would be placed with a view of the falls. Indeed, that famous photo angle is where he imagined the home would be built. But Wright came up with a more remarkable and demanding design. In going along with it, and footing the bill, Kaufmann deserves as much credit for Fallingwater as its remarkable architect. In 1963, the son of the Kaufmann's donated the home and surrounding wilderness to the Western Pennsylvania Conservancy which was founded in 1932 and now manages some 225,000 acres much of which is accessible to the public.

We were fortunate to visit in the off season. During the summer Fallingwater is solidly booked for tours and it is necessary to make reservations well in advance. Our wonderful guide suggested that we take a short walk to get that fabulous view of Fallingwater. He described it as where Brad Pitt and Angelina Jolie were photographed on December 7, 2006. It was her present to Brad, an architecture buff, on the occasion of his 43rd birthday. We posed on the same spot swapping cameras with other families. It was a nice way to end a remarkable visit with enduring memories.