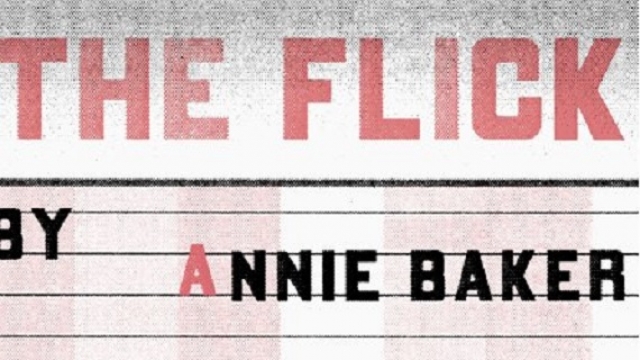 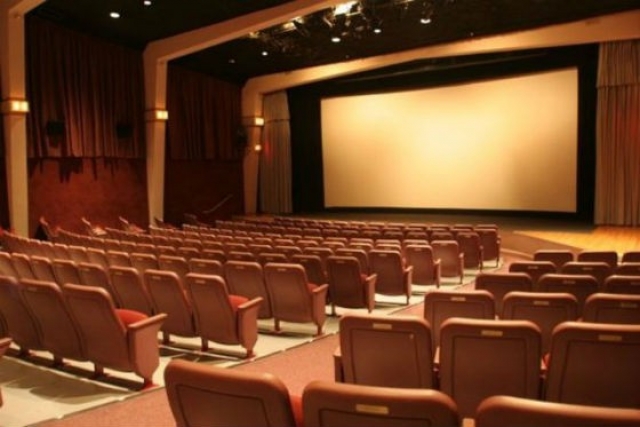 You’re bound to raise or lower an eyebrow as you enter the theater for Annie Baker’s Pulitzer-Prize winning comedy-drama “The Flick.”

You make your entrance onto the “stage,” which in this case is the traditional audience seating area. Your seat is on what’s usually the real stage.

But if the unrecognizable set-up results in confusion, jolts of recognition will shock you back into place as you watch all-too familiar situations and characters in Baker’s long but deservedly lauded work.

When this play, about three vastly underpaid employees at a run-down movie theater in near present-day Worcester, Mass. played Off-Broadway in New York, audience members who left early were dubbed “Flick” fleers by at least one critic. Perhaps these patrons considered the play not only too long (at roughly three hours), but too mundane, non-compelling and static to merit their time and attention. Nothing really “happens” in “The Flick” that’s noteworthy, these audience members might argue.

The truth is “The Flick,” which is receiving a powerful production by the Miami Shores-based Mad Cat Theatre Company through June 12, is deceptively simple; it’s anything but lacking in action, inner and outer conflict and complex, meaty material that merits close attention.

“The Flick” might seem as easy to overlook as the play’s working class, outsider-type characters.

Many people might breeze through life paying little to no attention to these individuals, who do the “little” things that are significant yet sometimes underappreciated. They serve you, they clean up after you, performing tasks that make your experience enjoyable. Ignoring their plight and contributions have made playwrights such as Arthur Miller upset. These characters also have the sympathy of Baker, who writes them with compassion while not ignoring their faults and transgressions. They’re imperfect, human, even unlikable at times, but Baker still makes us pull for them.

Baker has a gift of slowly, but surely, breaking through the protective armor that hides the feelings, secrets and vulnerabilities within her characters. She doesn’t rush it; that, and the pauses, help explain why the play’s about three hours long.

Beneath these outsiders’ seemingly simple lives are layers that reveal their complexity. They’re as complex as “The Flick,” which touches on a variety of topics: forging ahead even while dealing with disappointment and defeat, race, self-esteem, mental illness, the plight of the working poor, corporate greed, the difficulty that comes with change and the very human desires to escape life’s blows through fiction and for authentic connection with others.

The play is set in a run-down Worcester, Mass. movie theater that is one of the last remaining venues still projecting 35mm films.

The theater’s employees include Sam, a 35-year-old man who never attended college and still “lives in a shitty attic above his crazy parents,” in the words of his co-worker, Rose.

She’s a college student who’s mired in debt from student loans and whose mother works as a secretary.

Then there’s Avery, also a college student with a history of depression an advocate for 35mm films and a love of movies in general.

“We’re so vastly underpaid,” Rose notes, adding at another point that earning $8.25 an hour “is not enough to live on.”

There’s little doubt the three characters would vote for Bernie Sanders, with his desire to significantly raise the minimum wage. Certainly the prospect of free college tuition, which Sanders has touted, would appeal to Rose and Avery.

The characters’ boss is an uncaring, allegedly law-breaking man named Steve, whom we never see. But Baker writes him with enough specificity that we get a clear mental image of him. He’s emblematic of corporate America, that label many of us associate with greedy, wealthy bosses who don’t give their employees a second thought.

“The Flick” contains virtually no plot. The actors work by mopping the floor, operating the projector and picking up things you wouldn’t want to mention while eating. As they perform their jobs, they express their job’s and life’s disappointments, and rail against their meager pay, their unfeeling boss and his plan to replace 35mm film with digital projection.

We watch and listen as Baker brings the characters to vivid life, reminding us of ourselves or perhaps someone we know or love. Heartbreaking, even disturbing revelations about themselves and their boss keep us riveted to the stage. By describing a “tradition” among the theater’s employees, Baker blurs a normally black and white area of right and wrong, to reveal a grey area that makes us stop and think. The serious material is balanced with comic scenes that illustrate the characters' ability to withstand hard times and live. They're an inspiration.

The directorial choices made by Mad Cat founder and artistic director Paul Tei seem to be in sync with Baker’s intentions. The production opens with Sam (David Nail) striking playful poses and at times, he and Avery (Chevi Marquise Hill) treat garbage like basketballs and garbage cans as baskets. Sam also mimes swinging a mop as though it were a golf club, and he was trying to hit the “golf ball” (garbage). These playful moments help to conceal the darker thoughts and emotions within the two characters. Slowly but surely enough, this false display of serenity and playfulness gives way to seriousness, tension, anger and disbelief as information about the actions of the characters and their boss is revealed.

The characters are, at times, in a state of Chekhovian despair. During such moments, they'll make you look at your life -- and you'll realize it may not be as bad as you think. And if it is, you can muster the will to forge ahead; if they can, with all their issues, so can you.

“Um. Because everything is horrible? And sad?” he responds, as though the answer’s obvious. “And the answer to every terrible situation always seems to be like, ‘be yourself,’ but I have no idea what that fucking means. Who’s myself? Apparently there’s some like amazing awesome person deep down inside of me or something? I have no idea who that guy is. I’m always faking it. And it looks to me like everyone else is faking it too.”

Baker has said that she admires Chekhov’s writing and that he “taught me a lot about offstage characters.” She, like the late, great Russian playwright, also displays a soft spot in her heart for the feelings her characters are experiencing.

They often (but not always, as we learn, pleasantly surprised) have trouble expressing what they’re feeling, and so Baker often resorts to pauses. Most in the theater world are familiar with the "Pinter Pause," after playwright Harold Pinter's use of silence. Perhaps it’s time to coin a phrase to describe Baker’s use of silences, pauses and dialogue in which her characters struggle mightily to express exactly how they feel.

Director Tei puts into use Baker's pauses. The resulting silence sometimes communicates more than words can. At other times, Tei could make the pauses even longer.

Characters often speak over each other in Baker’s plays, and Tei and his cast accomplish this deftly. It reinforces these individuals’ strong desire to speak what’s on their mind. There’s a nice balance between the pauses and the interrupted dialogue, helping achieve variety.

The staging is also solid. Characters mad at each other sit distances away and Tei finds telling ways to help the actors illustrate the characters’ state of mind. For instance, when Sam experiences an overwhelming emotional moment, he holds onto railings as though for physical support.

One of the production’s shortcomings is ironic. Actors sometimes express emotions so vividly, it’s hard to understand exactly what they said. Otherwise, the performances are commendable.

Hill imbues Avery with a lively, hip, wide-eyed, impulsive air. He’s a man who seemingly loves life and is happy. While Hill’s performance smartly conveys that a depressed person doesn’t necessarily always look sad, he skillfully imparts that expression and others when necessary: the teary, aching voice sounds real and, when he’s angry, he stalks down the aisle as though he’s confronting the person who stole his identity.

Nail, as Sam, conveys that same aggressive, almost scary anger, like a wild, starving animal finally cut loose and ready to pounce on his prey. He erupts during these times with thunderous shouting.

Generally, Nail suggests the air of someone who’s taking his disappointments in stride, playing Sam as a convivial, thoughtful and laid back person.

Jessica Farr has a confident, sexually magnetic air as Rose. Her voice suggests a working class, street wise persona with dry humor. At the necessary times, Farr finds the emotional pain and sympathy in the character.

“The Flick” is a hyper-naturalistic play and lighting designer Melissa Santiago’s work reflects that. She doesn’t employ any effects or colors to suggest non-realism. It’s about as realistic a lighting design as you’ll find in the theater. Contrastingly, multi-colored hues beam blindingly into our eyes from the projector. Their intensity can suggest that the messages emanating from the play need our attention---now.

“The Flick’s” a play that speaks to us in many ways. In lesser hands, it would amount to a static, tedious, talky play. But Baker’s slowly revealed information and character development make this play a necessary one to sit through. You just need to let it grow on you.