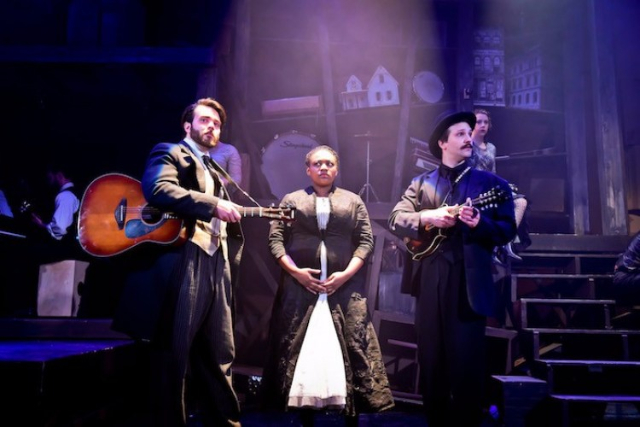 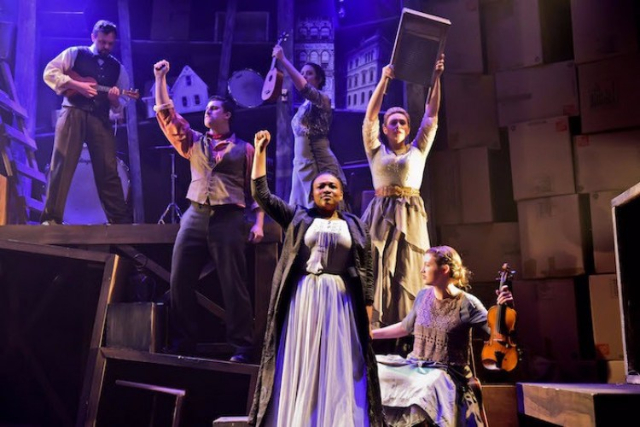 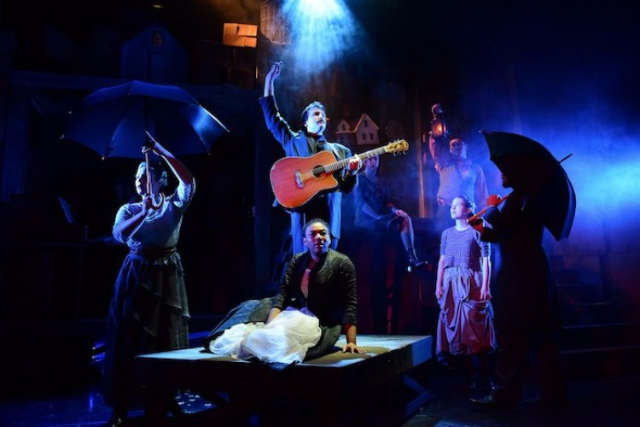 Haymarket: The Anarchist’s Songbook takes us on a visit to a tragic but inspiring moment in Chicago history and does it with a bang-up band of actors and musicians. The new Underscore Theatre production premiering this week at the Edge Theatre in Edgewater tells the story of the early labor fight for an eight-hour work day and better working conditions. The time is May 1886 and the place is Chicago’s Haymarket Square (the corner of DesPlaines and Randolph streets).

Two of the movement’s leaders—Albert Parsons (James Smart) and August Spies (Mike Mazzocca)—organize parades and protests and publish newspaper articles to bring attention to the plight of workers. It’s pretty clear that corporate fat cats ensure that police and “Pinkertons” (the private detective agency) are on site as the bad guys. The movement participants are mostly German nationals, socialists and anarchists. Parsons sings:

Hold your signs higher, stand proud and true
Lift up your voice till they hear you on Michigan Avenue
Look at the fat cats, they’re quaking with fear
Show them all the glory here.

Playing a major role in the story is Parsons’ wife Lucy (LaKecia Harris), a former slave, who is forceful, articulate and an effective organizer. She and the other wives (Summer Hofford, Victoria Olivier and Khaki Pixley) sing “Hear the News,” composed of excerpts from newspapers of the day, which unfailingly took the side of the corporations.

The story incorporates the dissension within the movement about the use of violence. One participant, Louis Lling (Royen Kent) sings a paean to “Lady Dynamite,” while Parsons tries to persuade him that violence will only beget more violence.

Two huge workers’ parades on May 1 (May Day) and May 2 give the protesters a boost. On May 3, police kill picketing workers at the McCormick Reaper plant on Western Avenue. The union organizers are incensed and they plan a big rally for the evening of May 4 at Haymarket Square. During the rally, someone tosses a bomb into the crowd, killing eight policemen. The source of the bomb was never identified. Parsons, Spies and three others are arrested, tried (sort of) and sentenced to hang. (Actually, eight activists were arrested, but the production omits several of them without affecting the power of the story.)

Alex Higgin-Houser created book and lyrics and David Kornfeld composed the music. Elizabeth Margolius’ direction and movement design bring all the pieces together for a rousing two hours of story, dramatic music and an occasional tableau. The nine talented cast members all sing and play a variety of American-roots instruments, including guitars, fiddles, mandolin, ukulele, cello, banjo, harmonica, washboard, cajon, piano and even a melodica. “La Marseillaise,” the French national anthem and a song with revolutionary roots, is an occasional refrain. Aaron Stephenson’s sound design is well executed, ensuring lyrics are clearly understood without diminishing the power of the instrumentation.

If the Haymarket story is unfamiliar, you can read about it before you see the play. The creators do a good job of telling a complex story, but everything will make more sense if you read this and this in advance. You can also visit the monument to the Haymarket martyrs at Forest Home Cemetery in Forest Park. Activists and organizers like Emma Goldman and Elizabeth Gurley Flynn are also buried in nearby Radical Row.

Underscore Theatre Company will stage Haymarket: The Anarchist’s Songbook through June 12 at the Edge Theater, 5451 N. Broadway. Performances are Friday-Monday at varying times. Buy tickets for $20-25 online or by calling 312-646-0975.