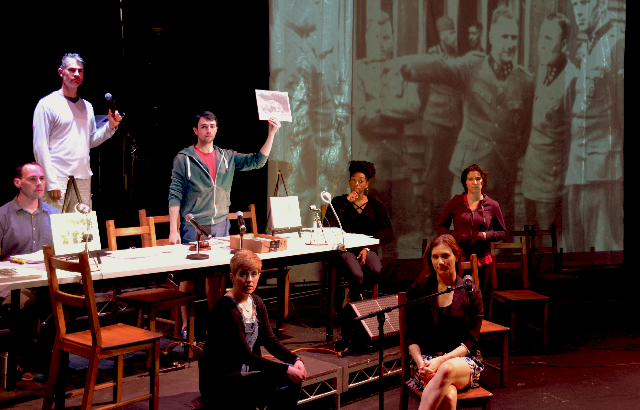 Here is the cast of The Album

So you can imagine what Moisés thought when he saw photos of Nazis partying at a resort near an infamous concentration camp.

“When I saw these pictures, something very personal happened,” said the renown Jewish theater artist and founder of the bold Tectonic Theater Project.

“When this album came to light…the fact that it was a new finding made me want to look at it again.”

The collection to which Kaufman is referring is The Hoecker Album. It’s a book of photographs showing the Nazi officers “singing, picnicking and flirting with young women,” at a pastoral resort near Aushwitz. Within that death camp, Nazis killed more than one million people.

The Hoecker Album is the subject of a new play in progress, titled The Album. Kaufman wrote it in collaboration with the Tectonic Theater Project.

The Miami Beach-based theater company Miami New Drama is presenting excerpts from the new play through Sunday, June 2 at The Colony Theatre. MND is the theater’s resident company.

Kaufman, the company’s co-founder, said this marks the first time he and Tectonic have examined the Holocaust.

“There has been so much written and said about the Holocaust that it’s hard to think what else we can say about it that is interesting or new or insightful,” he said. “When this album came to light…the fact that it was a new finding made me want to look at it again.”

“What proceeds is a journey into discovering who owned the album, whose it was, why were these photos taken, who are the people in the photos, when in the Holocaust were they taken and what is the story the photos tell,” Kaufman said. “People talk about the banality of evil. This is evidence of what they were doing in the middle of the Holocaust – having a vacation, relaxing, singing. There’s something about that that begs the question: How can you do that? What does it take to make those photos?”

The Album is “in keeping with Miami New Drama’s commitment to locally resonant, nationally significant drama,” according to press material. The play is “particularly relevant to Miami, whose extensive, multi-national Jewish community has welcomed many Holocaust survivors. The play comes as anti-Semitism and white nationalism are on the rise.”

Furthermore, “a recent study found that many Americans, particularly millennials, are misinformed about the Holocaust; two-thirds of millennials do not know what Auschwitz was.”

Spreading such awareness is also important to Miami New Drama artistic director is Michel Hausmann. The Venezuela native’s grandparents lived through the Holocaust.

“This play could not be more timely,” Hausmann said.

He praised Kaufman’s collaboration with Tectonic.

“The work that Moises and Tectonic have done in the past two decades has changed the landscape of American theater,” he said. “Moises has been a friend, mentor and teacher. Much of the original work we (Miami New Drama) are creating for next season is inspired by their process. What an amazing honor it is for a young company like ours to have a partnership with such an established, nationally recognized company.”

Kaufman and Tectonic rose to fame with The Laramie Project, a play “which examined the homophobia-driven torture and murder of Matthew Shepard (a gay University of Wyoming student).” On Oct. 12, 1998, Aaron McKinney and Russell Henderson pistol whipped Shepard with a gun, tied him to a fence in freezing weather, set him on fire and left him to die. A jury convicted both defendants of first-degree murder and a judge sentenced them to two life sentences. Prosecutors, however, didn’t charge McKinney and Henderson with a hate crime; that wasn’t possible under Wyoming’s criminal law. In 2009, President Obama signed the Matthew Shepard Act into law. It defined certain attacks motivated by victim identity as hate crimes.

The Matthew Shepherd murder was turned into a film for HBO.

Eventually, Tectonic turned the case into material for the stage. Kaufman frequently addresses issues such as identity, outsiders and intolerance in his work. It includes multiple Broadway directing credits, such as the Tony Award-winning I Am My Own Wife, about a transgender woman who survived Nazi and Soviet rule in East Berlin. Its transfer to Broadway established Kaufman’s track record of developing work that gains national attention.

But for now, The Album is in the developmental stage. It opened Thursday and runs through Sunday, totaling just four performances.

South Florida actors have joined Tectonic artists and Kaufman to present excerpts from The Album.

“The collaboration represents a new stage in Miami New Drama’s development and its dedication to original theater,” a press release states.

MND is “committed to artistic excellence and groundbreaking work unique to this diverse and extraordinary city (Miami) with a vision of theatre as a powerful form of social engagement,” it continues.

Past productions included The Golem of Havana, an original musical written and directed by Hausmann. In addition, the company debuted this season, its first, by mounting a culturally-mixed, multilingual version of Thornton Wilder’s classic Our Town. Critics praised these and other Miami New Drama productions.

Meanwhile, Tectonic Theater Project, founded in 1991, is a not-for-profit, New York-based theater company. Its work “has been seen by millions worldwide.” Tectonic has created and staged more than 20 plays and musicals.