The Arthur Lyons Film Noir Festival is a much anticipated annual event in Palm Springs. 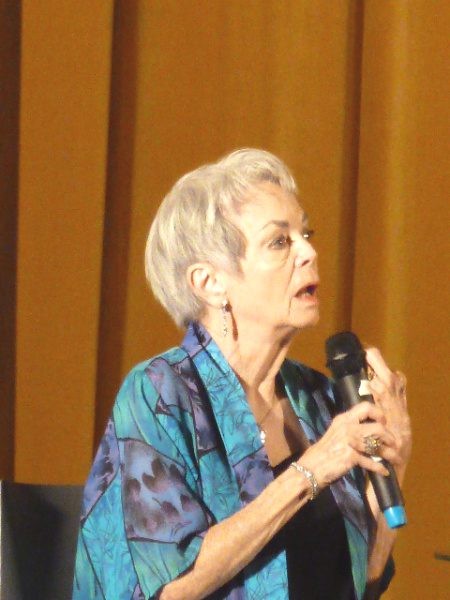 Nothing succeeds like success itself.  Art Lyons (no relation, but I’ve met and known Art as a film critic covering his Festival for more than ten years) was the Festival founder, a resident of Palm Springs, and a former City Councilman, who passed away in 2008.  He was also a local restaurateur.  His Lyons English Grille restaurant is still serving great prime rib.  Art was a devotee of the fight game even going so far as to work in the corner of a heavyweight boxing champion.  He also authored over twenty books on a wide variety of subjects and was easily recognizable in the desert scene because of his trademark fedora hat that he wore when he was out and about.  There’s no doubt about it Art Lyons was an interesting man. He was a fan of the hard-boiled detective novel (he wrote several himself) bursting with its tough guys, femme fatales, fall guys, and characters with shadowy pasts.  When books and novels of this genre were made into movies in the 30’s, 40’s, and 50’s, they became known as “film noir” movies.  Lyons became a huge fan of these so-called B movies that always seemed to take place on rainy nights in Los Angeles where it seemed every male character was packing heat, wore a fedora and a trench coat, and somehow was involved with a beautiful, seductive, mysterious femme fatale.

In 2001, he founded the Arthur Lyons Film Noir Festival as a way to preserve the legacy of this American movie art form. In the introduction to his book “Death on the Cheap: the Lost B Movies of Film Noir” Lyons penned, “ I wrote this out of a passion for film noir and indeed, B movies in general, and because tracking down these largely ignored films was akin to that excitement a paleontologist must feel dusting off a rock and discovering a dinosaur bone.”  Then as now, all films are screened in “gorgeous black and white” at the Arthur Lyons Film Noir Festival in Palm Springs, CA.

The 13th Annual Arthur Lyons Film Noir Festival that just concluded its most successful festival to date.  Producer and Festival Host Alan K. Rode, kept beaming to full houses for four days in the Camelot’s 500-seat theatre as he welcomed and thanked new and old noir aficionados for coming to year “lucky thirteen”.  Some came from as far away as the East coast and Canada.

In addition to seeing the films, one of the highlights and a favorite part of the festival’s attendees are the Q & A sessions with some of the stars that appeared in the films.  The stars are very accessible and are eager to discuss their roles in the movie and genuinely enjoy sharing personal anecdotes concerning the making of their films.  It’s a bit of a love fest on everyone’s part. Guest speakers this year included: 95-year old actress Marsha Hunt, director Michael Lindsey Hogg (son of actress Geraldine Fitzgerald and Orson Welles), actress Joan Evans, actor Stuart Whitman, actor/producer Jimmy Lydon, film historian and biographer Patricia Ward Kelly, widow of Gene Kelly and acclaimed film historian Foster Hirsch, author of 16 books on the film noir genre, who flew in from New York City to give a highly articulate and interesting introduction to the film “Murder Inc.”.

A sampling of the festival films included the great noir classic “Champion”, (1949) starring Kirk Douglas in a bravura performance that won him his first Academy Award Oscar nomination; “Three Strangers” (1946), starring Geraldine Fitzgerald, Sydney Greenstreet, Peter Lorre, and a “winning lottery ticket”, plus the inside story on the making of the film from Michael Lindsey Hogg, the son of Ms. Fitzgerald; “Mary Ryan, Detective” (1949), starring the afore mentioned Marsha Hunt, a gracious, and highly articulate 95 year-old charmer who regaled the audience for a good twenty minutes concerning her film and her career; “Murder Inc.” (1960), starring Stuart Whitman, and an impressive Peter Falk in his motion picture debut; “Christmas Holiday” (1944) starring Gene Kelly, Deanna Durbin, and Gale Sondergaard (she of the ubiquitous and dangerous Chesire cat-like grin and eyes).

The closing night film was the superb noir classic “The Asphalt Jungle” (1950), the John Huston written and directed story of a heist gone bad.  The fabulous ensemble cast is literally a who’s who of noir players that includes: Sterling Hayden, Louis Calhern, Jean Hagen, James Whitmore, Sam Jaffe, John McIntire, Marc Lawrence, Brad Dexter, and a young blonde actress who will go on to become a universal sex symbol in the next few years.  She will answer to the name of Marilyn Monroe.

For fans of the film noir genre, it doesn’t get much better than this.  The only movies missing from this year’s festival are my two favorite noir films: “The Woman in the Window” (1944), directed by the great Fritz Lang, starring Edward G. Robinson, Joan Bennett, Dan Duryea, and Raymond Massey, and the Robert Mitchum/Jane Greer/Kirk Douglas noir classic “Out of the Past” (1947), directed by Jaques Tourneur.  Perhaps, next year producer Alan Rode will surprise me. Alas, they just don’t make ‘em like they used to.

If you are a fan of film noir and if you have some vacation time saved up, then Palm Springs (come mid-May of 2014) is the place for you to be.  The Arthur Lyons Film Noir Film Festival is one of the best of its kind in the country.  You know, sometimes there are extra perks to being only a two-hour drive from Hollywood with its storied past, wonderful actors and its movie vaults filled with a treasure trove of golden memories.