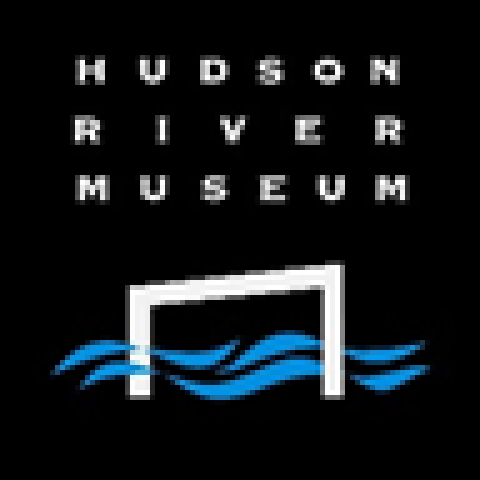 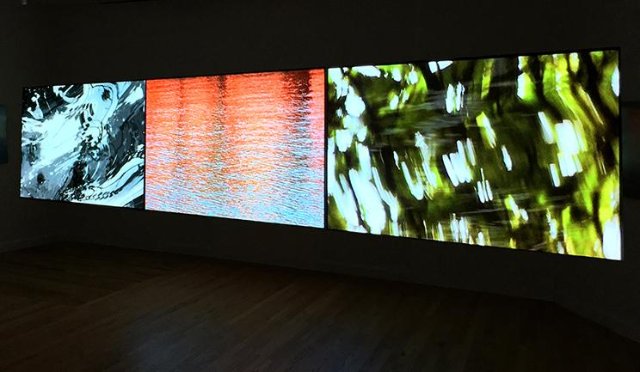 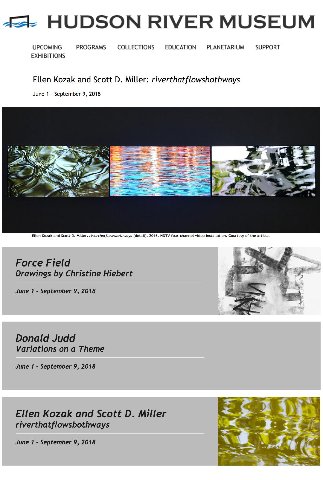 The Hudson River Museum announces its summer exhibitions, with works by contemporary artists who explore the landscape and the river to create evocative works of art that are keenly attuned to the environment around them. In addition, a selection of prints from the permanent collection by Minimal artist Donald Judd will further explore the iterative process and creative possibilities of abstraction. The Museum will also feature a rotation of works in blown glass by Louis Comfort Tiffany, drawn from the permanent collection. The exhibitions will be on view from June 1 – September 9, 2018 at the Hudson River Museum.

Ellen Kozak and Scott D. Miller: riverthatflowsbothways
riverthatflowsbothways, a video installation by artist Ellen Kozak (American, born 1955) and composer
Scott D. Miller (American, born 1956), takes its name from the translation of the Lenape word for the Hudson River. The artist states, “I use the surface of the river as a giant watery lens that assimilates reflection, color, and pattern. riverthatflowsbothways creates a contemplative space that lengthens one’s sense of time and evokes feelings of wonderment and comfort but also conjures presentiments of destabilizing undercurrents.” Kozak asserts the primacy of the river as a site of aesthetic and environmental concerns.

Kozak draws from her ongoing experience as a painter as well as from her background in the early formative years of video. Without offering views or realistic representations, Kozak’s piece is an immersive meditation on the movement and luminosity of the river. Working beside the Hudson River, Kozak roots her art in the use of the river’s surface as, in her words, “a lens that collects activity from the sky above: the movements of clouds, fog, foliage, planes in flight; and on the Hudson, barges transporting crude oil.” Intimately observed abstract images and sound coalesce within the gradually changing images, bringing viewers in contact with the river as a living organism.

“Kozak’s diurnal commitment to riverine views, whether in painting, collage, or, as here, video, reminds all of us of the transcendent potential in everyday phenomena,” states Assistant Curator Ted Barrow. “Especially here, at the Hudson River Museum in Yonkers where we overlook the Hudson River, her radiant work underscores the central place of nature in our lives.”

Since 1994, Kozak’s artist studio has been on the east bank of the Hudson River, providing a view of the river in all seasons. She works directly on the banks on the river, sometimes even in the river, where her visual ideas are guided by direct observation. Her work has been exhibited at museums and galleries throughout the tri-state area, including the Katonah Museum of Art; the Samuel Dorsky Museum of Art in New Paltz, NY; The Hyde Collection, Glens Falls, NY; the Odetta Gallery in Brooklyn, NY; and the Katharina Rich Perlow Gallery in New York City. Collections in which her works are found include The Brooklyn Museum, The Metropolitan Museum of Art, The Museum of Modern Art, Smithsonian American Art Museum, The New York Public Library, and Yale University Sterling Memorial Library.

Force Field: Drawings by Christine Hiebert
Christine Hiebert, (American, born Switzerland, 1960) a Brooklyn-based artist, investigates the nature and language of line and how different types of marks relate to one another and energize a blank field. Over the past three decades she has embraced drawing as central to her artistic journey, whether it be with charcoal, graphite, and ink, or even tape and dirt. She is known for her gestural works on paper, as well as her site-specific blue-tape drawings in large architectural spaces. She travels to remote natural environments, lately exploring desert and range topographies of the American West, where, she says, “the earth’s gestures are most visible.”

For Hiebert, drawing starts with the problem of the line, how to form it and how to follow it. The gesture of a line has an inherent energy and direction, played out on a sheet of paper. There is a tension between her marks and areas left blank, and the white voids begin to suggest light. “I send out a line to negotiate the blank field of the paper, the unknown," says Hiebert. "I try to find my place there, to engage with space in a way that is both freeing and creates a sense of belonging.”

More than a dozen works on paper will be on view in the Museum’s two-level atrium gallery, including 8-foot, scroll-like works accompanied by smaller related drawings. The sense of space and light the artist creates in these drawings conveys the vastness and unpredictable energy of nature. Hiebert recalls: “I had some very early years of painting in woods and fields with a portable box easel. I would soon start a very different path in my work that was not related to observation. But the practice did tell me that I like to stand in an open field for a very long time, that I like to explore and to ‘settle’ in the outdoors, that the weather is energizing, and that there ­is a way of getting to the truth of some problem in my mind when surrounded by the tangible truths of the natural world.”

Laura Vookles, curator of the exhibition and Chair of the Hudson River Museum’s Curatorial Department, adds: “I am interested in all the ways artists express a connection to nature, from realistic depictions to the most abstract. The linear play in Hiebert’s work evokes energy and movement in the world around us.”

Donald Judd: Variations on a Theme

Though he resisted the title, Donald Judd (American, 1928–1994) was a towering figure in the Minimal art movement of the 1960s and 1970s. He created three-dimensional works in series, which engage the space around them. Variations on a Theme showcases Untitled, 1977–78, a series of 16 etchings by Judd from the Museum’s permanent collection. Consistent with his three-dimensional constructions, called “Specific Objects,” by Judd, these prints incorporate clean, precise geometric forms with slight variations. Important for Judd, they are not made by the hand of the artist. Like many of his Pop Art and Minimalist contemporaries, he had his sculptures factory produced and his father Roy, who was trained as a printmaker, produced many of the artist’s prints.

This series demonstrates the variety possible under certain scrupulous parameters. Different angles and varied relationships between lines change our perceptual understanding of each print. Judd wanted his art to be self-evident—what you see is what you see. Refusing to align the diagonal angles of these prints, for example, he highlights specific qualities of the medium itself: graphic, two-dimensional, and not illusionistic. According to Judd, “A work needs only to be interesting.”

Though this exhibition focuses solely on his prints, Judd extended his scope from artwork to furniture and architecture. One of the first artists to convert a former industrial loft into a living and work space in SoHo, Judd later purchased an abandoned army barracks in Marfa, Texas as a space to work outdoors and to contend with the desert landscape itself. These goals were not just aesthetic, but also deeply rooted in environmental concerns. Like reusing industrial space and materials in the production of his art, his Marfa project was twinned with the burgeoning environmental preservation movement of the 1970s