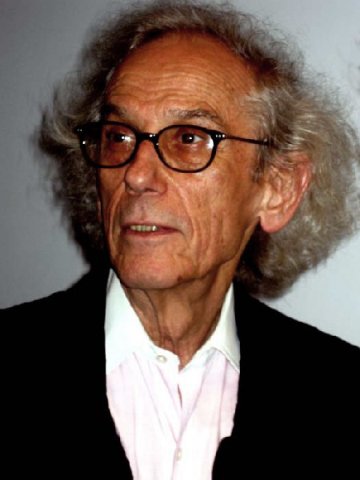 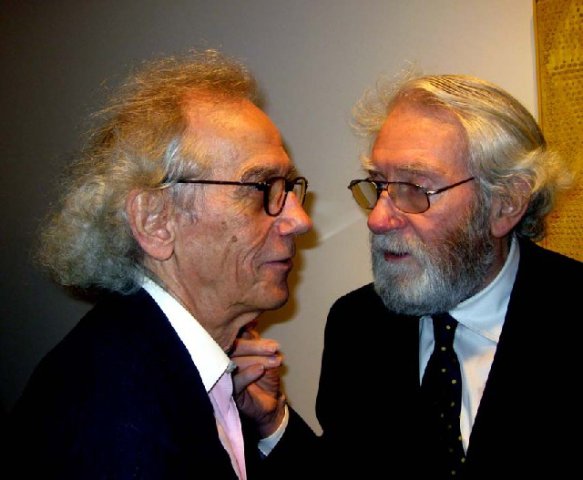 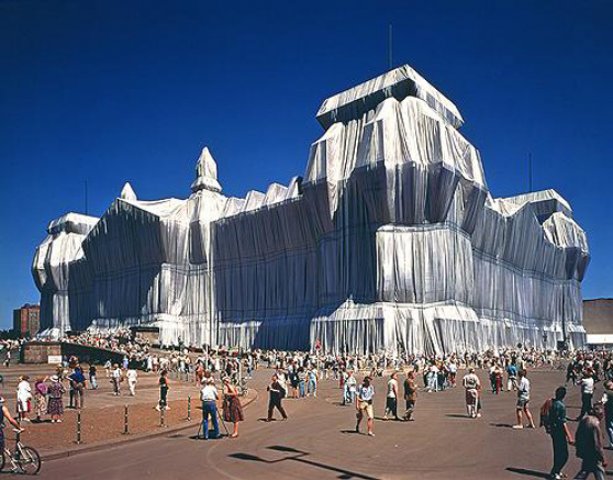 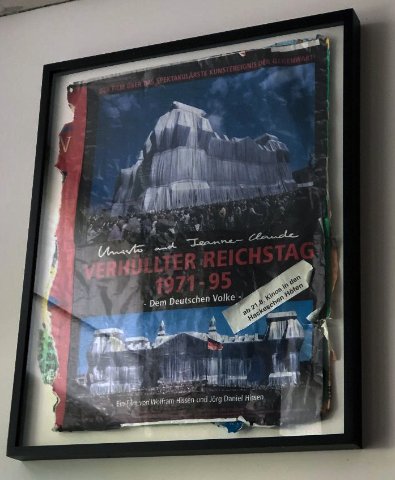 The poster I tore off a billboard in Berlin and framed. 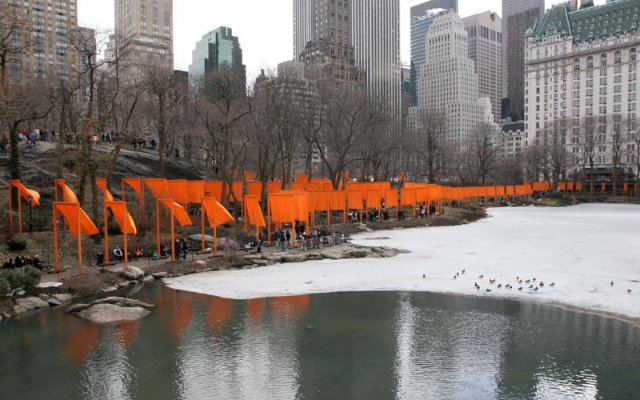 The Gates project for Central Park. 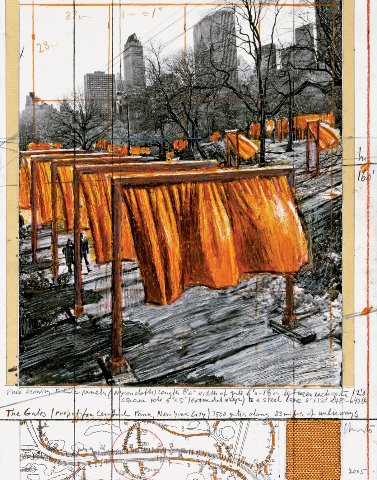 They sold studies to raise money for projects.

Until the end, Christo, who has died at 84, was thinking big with a project to warp L’Arc de Triomphe in Paris.

Using oil barrels as material he was also planning to create a pyramid in the desert that would rival those of Ancient Egypt.

They were known to the world simply as Christo and Jeanne-Claude.

Their monumental, global, site-specific projects, however, could not have been more daunting, astonishing or complex.

They functioned on a scale and with driven intensity that set them apart from the art world of their generation. Defying category or definition they slithered in and out of the mainstream art world.

Long before they met he started somewhat conventionally with gallery exhibitions, for example, at Leo Castelli in Manhattan. There were ersatz doorways and a wrapped wheelbarrow. In Paris he edged outside blocking a street with stacked barrels.

The work was gradually expanding and becoming more ambitious.

Decades ago, under director Stephen Prokopoff, there was an exhibition at Boston’s ICA. The artist attended the press opening and discussed his projects.

Through his career, solo and later with Jeanne-Claude, they raised millions of dollars for their huge projects. The gallery and museum level work entailed studies, finished renderings and maquettes. They proved to be pricey and collectable.

Significantly, they did not seek grants or public money. That allowed them to color outside the lines. They hired their own legal teams and consultantd to engage with the complex petitions and permissions required to temporarily wrap The Reighstag, Pont de Neuf, surround islands in Miami, stretch a curtain across the Grand Canyon, or wrap a section of the coast of Australia.

Armies of volunteers assisted in the complex installations. When the projects, some of which took decades to realize were dismantled, the materials were donated. Through recycling the projects had another generation.

There was never any waste. Even opposition and dissent became a part of the projects. Imagine, for example, prevailing on ministers and government bureaucrats to convince them to warp the Reichstag. The absurdity of the projects was a massive part of their populist appeal.

We were in Berlin not long after that. I tore a poster off a wall. It was thick with layers of prior posters. Tucked into the overhead bin it came home as a souvenir now hung in our collection. In its own way the poster has been preserved as a conceptual work. Part of its appeal entails that its ephemeral, pragmatic, functionality has been extended as a found object or assisted readymade.

You had to get to the work and within a limited period of time, generally a couple of weeks. For most of us that meant actually seeing few of the projects. Unless you happened to be in Berlin, Paris, or California for “Running Fence.”

In February, 2009 that meant Astrid and I taking a round trip bus to New York to see “Gates” in Central Park. It was an exhausting excursion in which getting there was a part of the experience. That entailed anticipation on the way and lingering after images of the return trip. The next day we resumed our day-to-day lives.

For one bracingly cold winter afternoon we rambled through the maze of gates defining a path in Central Park. There were door like metal frames and saffron colored curtains.

Light was fading as the sun sets early in winter. From the exit of the park we made our way to the Carnegie Deli. Then back on a bus to Boston.

Years later we attended an opening for Otto Piene at Sperone Westwater Gallery in New York. Christo and other artists came to interact with him. There was commonality. The Group Zero artist developed massive Sky Art projects as a part of his practice.

Then late in their careers the work continued. Otto died in a cab on the way to his museum exhibition in Germany. There was always the next project and planning for after that.

There is one more chance to see the work, a project involving plans to wrap Paris’s Arc de Triomphe in 269,097 square feet of fabric. First conceived in 1962 by Christo and Jeanne-Claude and titled “L’Arc de Triomphe, Wrapped (Project for Paris, Place de l’Étoile – Charles de Gaulle),” the work is still expected to be executed in September 2021.

The memory of Christo and Jeanne-Claude will linger with the millions who experienced the work. “The Gates” in Central Park will be with Astrid and me forever.