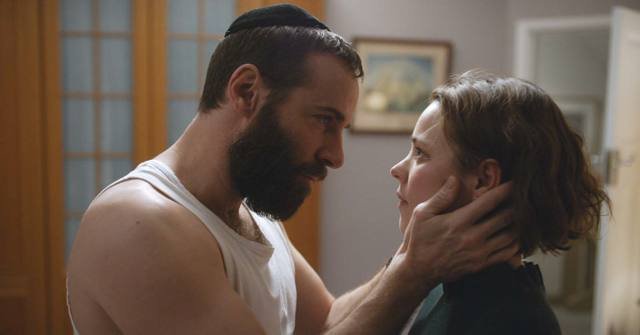 Movies have come a long way since 1934 when it comes to the subject matter of ‘forbidden fruit’ as depicted in Lillian Hellman’s muted, but daring play and film, “We Three”, was produced in the heyday of the Hays Office, when movie censors reigned supreme as to what American audiences could or not see In the cinema.   The ‘no-no’ subject matter in the legitimate theatre was breached by Tennessee Williams when he referred to sexual subject matters in his plays as “that of which we dare not speak”. That was in the 50’s.

It’s now almost the second decade of the 21st Century, where filmic boundaries, stories, and audiences, now accept homoerotic love; which if, tastefully and honestly done, keeps forbidden sexual love as a legitimate subject-matter category and one that reflects and recognizes all aspects of human relationships. In most western societies we now live as a true global community free to live as one chooses.

The story set in England is adapted from the novel “Disobedience” by Naomi Alderman and the screenplay, sensitively written by Sabastian Lelio and Rebecca Lenkiewicz, centers around now New York-based photographer Ronit Kruska (a sensational, smoky, alluring, introspective Rachel Weisz), who flies home to London after learning about the death of her estranged, charismatic, Rabbi father Rav Kruska (Anton Lesser), the Spiritual leader of a highly Orthodox temple where traditions run deep.

Ronit returns to the same Orthodox Jewish community in North London’s Hendon district, that shunned her years earlier for her childhood attraction to Esti Kuperman, a close female friend brilliantly portrayed by a conflicted Rachel McAdams, who is now married to Rabbi Dovid Kuperman, a childhood friend of both women; now sets in motion a series of internalized emotions that soon reignites their burning attraction and passion as the two women explore boundaries of faith and adult sexuality. England only
rewrote its sexuality laws in 1967; changing their penal law system concerning mutual consent age between adults, which now avoids the “gross indecency” laws that ensnared Oscar Wilde at the turn of the 20th century.

“Disobedience” is a mesmerizing, interior, fascinating, and affecting screenplay that carefully structures the movie to squeeze maximum emotional impact from its two stars, which it does in spades.   It’s a bold and daring film even by today’s standards.   The power and fascination of its subject matter is what propels the human story that director Lelio wants to tell and that cinematographer Danny Cohen wonderfully captures.

Jewish life in England is somewhat different than here in America.  The closest link to English Jewry for American Orthodox Jews are the Orthodox Hasidic communities of Williamsburg, Brooklyn.  Also, there are many background story points and echoes that one will find in the stage-play “The Wanderers”, written last year by playwright Anna Zeigler, who set her powerful play within New York’s Satmar Hasidic Judaism sect in Brooklyn.

In fleshing out his screenplay director Lelio, delivers a richly textured small story with large implications and ramifications.  One doesn’t have to be Jewish to appreciate and understand the character dilemmas facing actors Ms. Weisz and Ms. McAdams.  The journey of life presents everyone with critical agonizing choices. “Disobedience” allows us a peek into the lives of a small insular community that grapples everyday with making choices hoping to make the right choices, be they life altering or not.

Alessandro Nivola as Rabbi Dovid, delivers a finely nuanced, pivotal and potent performance as the helpless husband caught between his emotional pain and his faith, and the passion of two women who make him feel as if he is an interloper is this conflicted threesome, where all are spinning around the traditions that bind yet separate them at the same time.  I dare say, that some women who see this film will secretly relate, despite its slow glacial pacing.  There are a lot of moments where Ms. Weisz and Ms. McAdams stare at each other communicating from a deep emotional center within.  We men, may be hard-wired differently in our relationships, but, ultimately, I feel audiences will make up their own minds as to the truthfulness and honesty of “Disobedience”.

There are strong key scenes where nudity and sexual situations take place in the story.  These scenes are not gratuitously filmed to arouse.  They are integral to the story and are filmed in such a manner that the emotional depth felt by the characters and performed by two Hollywood stars, doesn’t become a seat-squirming experience but rather, as a catharsis for both the characters and the audience.

“Disobedience”, is now in wide release.