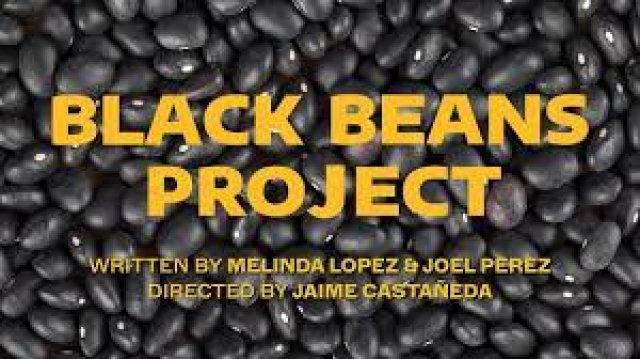 In Black Beans Project, a sister and brother (played by creators Lopez and Perez) meet virtually to share a secret family recipe that forces them to reveal secrets of their own. They share memories and make plans, transforming their pandemic panic to renewal in this tender comedy about family, food, and finding the strength to move on. Black Beans Project invites audiences to open a bottle of wine, chop some garlic, and savor the possibility of connecting with family after a long time apart.

WBUR’s The ARTery states, “Oh Mama! Lopez and Perez cook up some virtual love. Light and fun with a bit of Spanish folded in.” GBH says, “Black Beans Project is everything the dish at the heart of the piece might suggest — warmth, comfort and textured. With a bond that spills beyond the screen, Lopez and Perez are a choice embodiment of family as their characters test and restore vital familial ties.”

Black Beans Project features performances by writers Lopez and Perez, as well as sound design and original music by Mikhail Fiksel and video design by Hana S. Kim. Tiffany L. Taveras is the video editor, Valentin Frank is the sound engineer, and Taylor Ness is the video and lighting engineer. Sam Layco is the stage manager, Charles Haugland is the dramaturg, and Caley Chase is the line producer.

Melinda Lopez (writer/performer) is The Huntington’s artist-in-residence. The Huntington has produced her adaptation of Yerma (2019), and her plays Mala (2018), Becoming Cuba (2014), and Sonia Flew (2004). Her work has also been seen at Steppenwolf Theatre Company, Laguna Playhouse, San Jose Repertory Theatre, among others. Her play Mala (also produced at ArtsEmerson and Guthrie Theater) earned the 2017 Elliot Norton Award for Best New Play and an Arts Impulse Award for Best Solo Performance; it appeared on GBH in spring 2020, and is available on Audible. She has appeared at the Huntington numerous times as an actress including in Rosencrantz & Guildenstern Are Dead (2019), Yerma (2019), Mala (2018), and as Mrs. Gibbs in Our Town (2012). Ms. Lopez is a 2019 Mass Cultural Council Fellow in dramatic writing, was the recipient of the 2019 Elliot Norton Award for Sustained Excellence, and was the first recipient of the Charlotte Woolard Award, given by the Kennedy Center to a “promising new voice in American theatre.”

Joel Perez (writer/performer) is an award-winning actor and writer living in NYC. His theatre work includes Fun Home (Broadway, The Public), Kiss My Aztec! (Berkeley Rep, La Jolla Playhouse) and Sweet Charity (New Group; Lortel Award Outstanding Featured Actor in a Musical). He previously appeared in Pirates! (Or, Gilbert and Sullivan Plunder'd) (2009) at The Huntington. TV work includes Jesus Christ Superstar Live! (NBC), “Person of Interest” (CBS) and “Odd Mom Out” (Bravo). He performs with the UCB Maude sketch team Peach and is a writer and performer for the musical theatre comedy sketch show SHIZ which has performed at UCB, The Pit, Improv Asylum and 54 Below. He is currently developing a solo musical comedy show Playing with Myself for Ars Nova which will premiere in June 2021. His play The Church of the Holy Glory premiered at Ars Nova ANTFest 2018. He is in 2020/2021 Ars Nova Playmakers Lab for his Untitled Sabado Gigante Project. He is a 2019 NYSCA/NYFA Artist Fellow in Playwriting from NYFA, and a graduate from Tufts University and the British American Drama Academy. Follow him at @misterjoelperez and visit joelperez.com.

TICKET INFORMATION: Dates:Black Beans Project is available for on-demand streaming now through June 13, 2021
Pricing: All tickets are pay-what-you-can, with a suggested price per household of $25
To purchase: huntingtontheatre.org/blackbeans or 617-266-0800