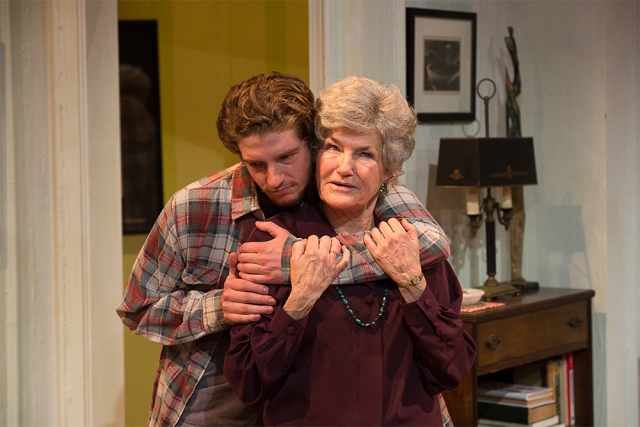 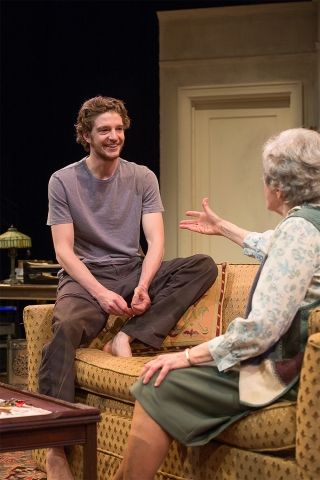 A couple of nights drags into a month. 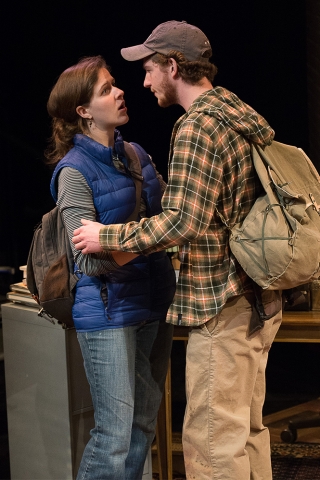 Bec (Emma Geer) wants to break up with Leo. 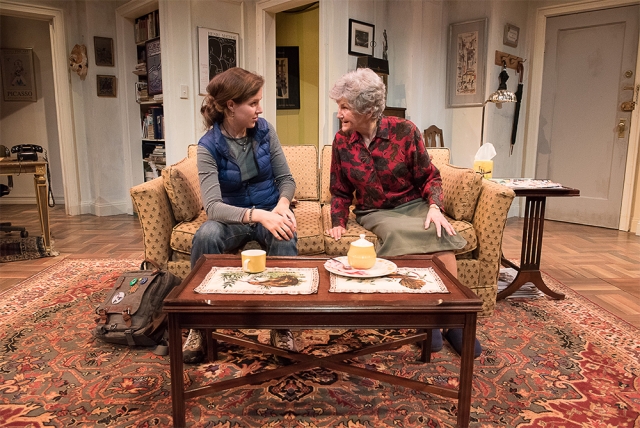 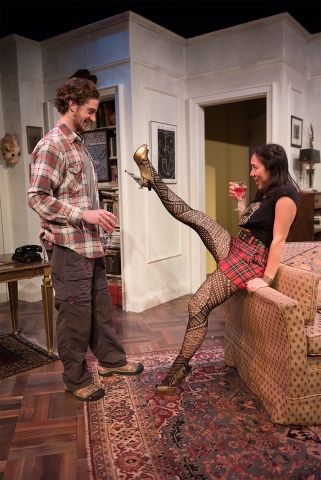 To say the least she is surprised by this unannounced home invasion. Hilariously, she has her hand over her mouth in a muffled initial exchange. It seems she doesn't have her teeth in. Another running gag is her hearing aid which isn't always in or functioning.

In yet another take on Whitman's "Song of the Open Road" or Kerouac's "On the Road" this millennial drifter from St. Paul has dipped the rear wheel of his fully loaded bicycle, set out from Seattle, and now will bathe the front wheel in the Atlantic.

Asking to crash for a couple of nights turns into a month. He intends to head back, hence 4,000 Miles, the title of Amy Herzog's most acclaimed play, before bad weather sets in.

From the get-go they bicker and argue with issues and peeves that are as generational as they are personal. As Senator Joseph McCarthy would say she has been a lifelong, "Card Carrying Member of the Communist Party" and proud of it. Other than a vision quest and endurance trial he is at best a purposeless drifter whose heavy baggage exceeds the some 50 pounds of gear he is pedaling cross country.

Initially, she tends to his immediate creature comforts. She demands that he take a shower and give her clothes to wash. She thrives on unanticipated domesticity and care giving briefly invading the lonely isolation of end of life tedium in God's waiting room.

She is now down to just one, the neighbor across the hall, in her once merry band of octogenarians. For a time the merry widows and widowers enjoyed New York's cultural resources and restaurants. Each day she calls the  neighbor just to check whether one or the other has gone stinky.

Learning about Leo, what the cat dragged in during the middle of the night, it appears that his back story is more Easy Rider, road rage, than poetic adventure.

At a tedious pace Herzog's over scripted text knits up the raveled sleeve of care. There are lots of sidebars to untangle. Start with Vera having no children of her own. Hilariously she tells of the escapades of her hard drinking, philandering first husband Arthur, then a long happy relationship with Marxist Leo an author and activist. She raised his two kids including the mother of Leo.

A half hour into the some 100 minute, one act play, the drama has dragged on and on when  we finally meet Leo's ersatz girlfriend Rebecca or Bec (Emma Geer). It is difficult to determine whether her low energy, enervating performance is in the text of Herzog or lackluster direction of Nicole Ricciardi.

She is such a self-absorbed, pouty boor that it is difficult to comprehend what Leo sees in her. The only redeeming aspect is her commitment to Third World volunteer work, mostly on her parent's dime.

Similarly, cash strapped Leo borrows money from Granny but will pay back with the next expected "infusion" to his coffers. While he lives dirt cheap, like too many adventure seeking millennials, Mom is picking up the tab. How many empty-nesters are still shelling out cash as their kids find themselves.

For my generation, having earned our BAs, we got the boot. The mantra was 'good luck kid, write if you find work.'

It is just one of  many reasons why I really didn't like Leo. Considering the role, however, Boover performs it convincingly. He brings to it a quirky, screwed up charm.

The back-story of why Leo is a messed up drifter is dense and complex.

It appears that Bec violated a pact. Initially, there were four planned for the cross country trek. The other woman was injured and withdrew. Leo opted to travel with his best friend Micah when Bec, good grief, enrolled in college. She is in NY on an internship.

There is another twist, during a drugged out night Leo planted an open mouthed, sloppy kiss ("with minimal tongue") on his adopted Chinese sister Lin. That has shoved everyone into therapy. It may be part of why Bec has come by the apartment to tell Leo that she had decided some time ago to break up.

Wrapped in a comfy blanket with Granny on the couch, late at night, there is the guts spilling reveal as tearfully Leo relates how Micah was run off the road by a Tyson chicken truck in the heartland of Kansas.

At the accident scene the dazed and confused Leo was confronted by a woman from Tyson. She demanded that he hand over the memory card from his camera. The attempt was a corporate move to eliminate all evidence. Micah was crushed to death under tons of chickens in crates.

There is a stretch here that Leo in response to pressure has smashed the camera and with it all memories of his adventures with Micah. Why would Herzog make him do that? Tyson had no legal basis to make that demand. It reveals a fatal flaw in Leo in the face of crisis and tragedy. He called his mother and Micah's parents then went back on the road. He skipped the funeral of his best friend.

How can we have an ounce of compassion for such a coward and slacker? Leo sucks.

At the end of his emotional breakdown there is yet another hilarious moment when Vera reveals that she isn't wearing her hearing aid. So his unloading has fallen on deaf, and we assume, unsympathetic ears. Arguably, that's what he deserved.

It reminded me of Big Daddy confronting Brick about the death of his buddy Skipper. Like Brick the death of Micah has left Leo an emotional cripple.

She is dressed outrageously in a costume aptly designed by Stella Schwartz. Striking a dramatic pose she proclaims that she is "Duh" a Parsons student. She is on her way to being a famous artist but hasn't yet decided on a medium. Performance artist would appear to be a good option.

There are lots of great zingers, including his screwing up her name, ("That will set you back 20 minutes") and the inevitable Asian connection. They are groping on the couch when Granny walks in.

Overall, this production has many technical merits. The set by John McDermott aptly creates the mix and match of a period NY apartment. The lighting of James W. Bilonski neatly differs day and night. There are also wonderful musical interludes created by Amy Altadonna.

While popular with audiences and most critics the Herzog play, frankly, is overrated.

There is, however, a truly compelling reason not to miss this production. As a character actor this is on the short list of finest performances from the always remarkable Annette Miller. We always enjoy her performances but never more so than her feisty but endearing Vera. It's still early in the season but Miller would seem to be a lock for a nomination come year end awards time.

In every move and gesture, inflection of voice, Miller puts her whole body, heart and soul into this role. Her rich and complex life experience is a total mismatch for the clueless millennials who, based on nada, appear to have attitude up the wazoo and all the answers.