Experiments at the NY Opera Festival 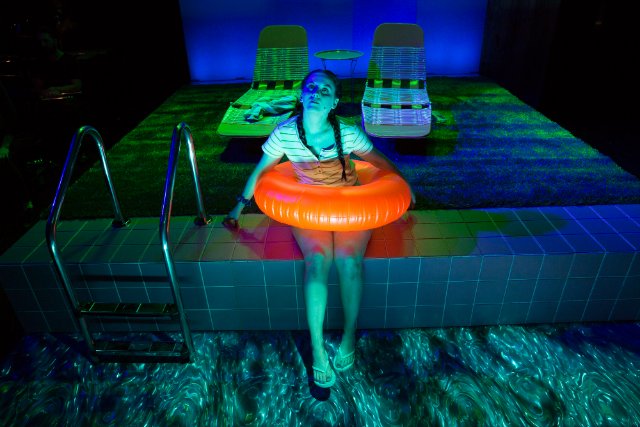 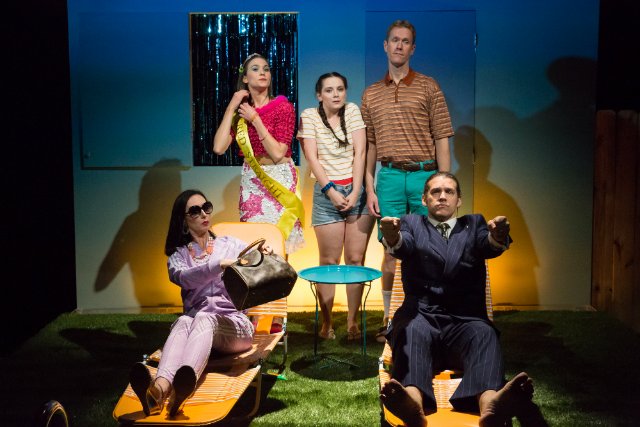 A contemporary Hollywood family, not the Brady Bunch Emily Geller, a superb contralto, is the Mother, Rachel Doehring is Abigail, Sarah Daniels, Chunky, Timothy Stoddard, her brick, as Walter, and Joshua Jeremah as Father 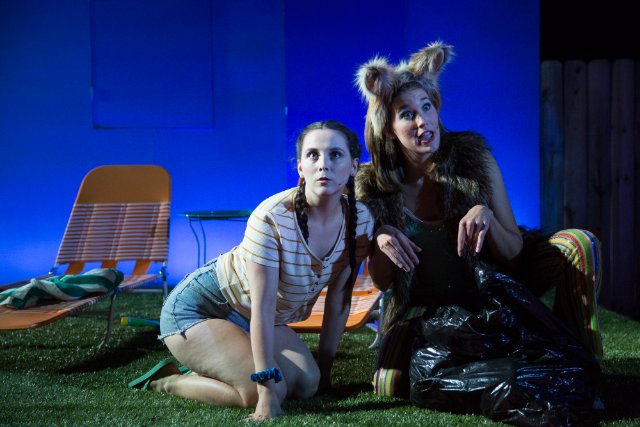 Chunky and a backyard coyote, in love like Janacek! Rachel Doehring prances over the stage as she sings the coyote. 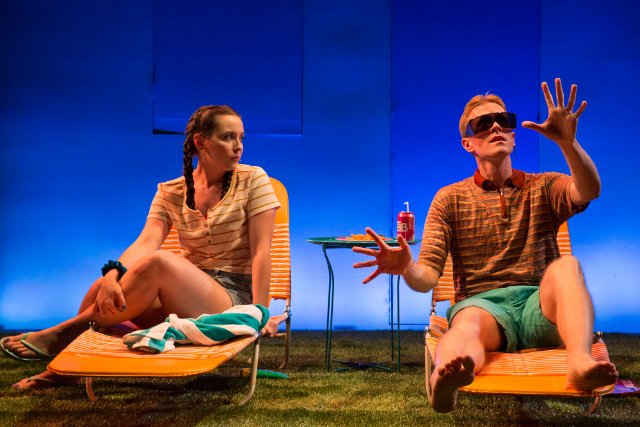 The man who is a tall glass of water, Chunky's anchor. 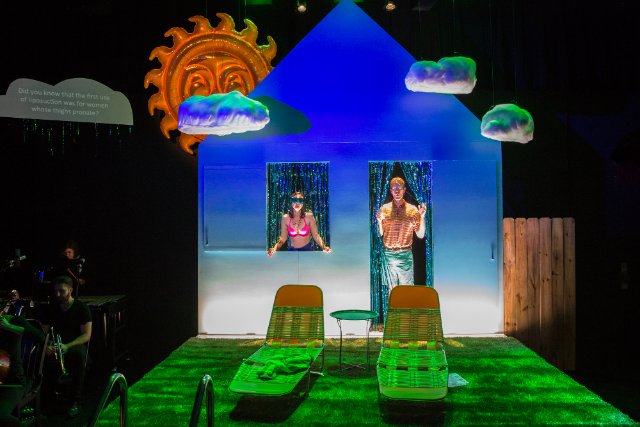 Tinsel covers the windows in a Hollywood home. We spend the evening in the backyard, with a pool with tinfoil water at the lip of the stage. Kate Noll's set is perfectly suggestive. 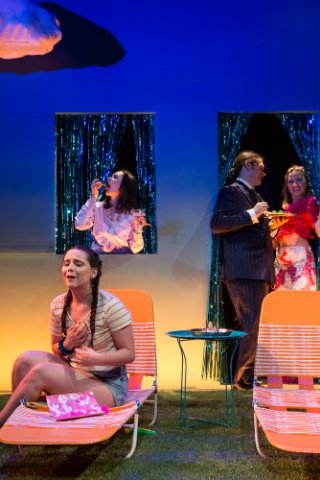 Everyone goes on, simply not discussing a brother/son's death.

Experiments in Opera was co-founded in Brooklyn in 2010 by composers Aaron Siegel, Matthew Welch and Jason Cady. They contributed Chunky in Heat to the New York Opera Festival.  It was a wild, wacky and moving work.

What is contemporary opera or perhaps what makes opera contemporary?  For decades opera production of classic works has been updated, and even desecrated in Euro Trash.  However ‘contemporary’ the staging may be, the operas are still classic and come from the past, sometimes the distant past.  Lohengrin, for all its gorgeous music, is still a story about Parsifal’s son, who in the end sails away on a swan to return to the Holy Grail and Elsa dies, unsatisfied. Can the story attract new audiences in America?  Probably not.

Why are opera companies afraid of the 'now'?  Opera Philadelphia isn't, but they are unusual. They have given us Sky on Swings about Alzheimer’s, and also a very present We Shall Not Be Moved, directed and choreographed by Bill T. Jones.  Huang Ruo often sets his opera story in the Asian immigrant present of the US.  The Metropolitan Opera pushing forward has mounted new works based on Shakespeare, and a film by Luis Buñuel, which felt contemporary but was unsingable.

Chunky in Heat is striking, because the recitative is current.  A.M. Homes, the prize-winning writer of fiction, undertook the libretto. As with other works of the composer-collaborative, the language sounded like conversation.  Yet it sits well in the singing voice.  Lines are passed from character to character.  In the end, after a harrowing and darkly humorous story, an aria is approached. It is based on the comforting children’s book by Margaret Wise Brown, Good Night Moon.

Jason Cady and his troops approach the question from another vantage point.  They tell stories set in the present and relevant to our present experience. Language comes from now. Cady set one of his small operas in Outer Space. The female lead prefers an R2D2 figure to her boyfriend, even though it is pointed out that R2D2 does not have the equipment to satisfy.

I asked Jason Cady, one of the founders of Experiments in Opera and one of the composers of  Chunky in Heat, to comment on his work.  It was revealing to read his email quoted below:

Usually I write my own libretti, and over time libretto writing has become as important to me as composing (but it was an honor to set A.M. Homes’ words). I find recitative fascinating and I think it has been overlooked in opera for hundreds of years. My idea of writing a contemporary take on recitative is to use vernacular American English. When writing comedy a certain amount of humor occurs simply by juxtaposing the operatic voice with the colloquial language. But even for tragedy, it is still more effective to use the kind of language that people speak today, because anything else would be a barrier between the emotion and the way it is transmitted. For arias/songs I love rhyming, and other poetic devices, but I still prefer to use language that is in a spoken vernacular. I have a lot that I want to say, so clarity is important to me. I’m less interested in being evocative or abstract.

In the case of Chunky in Heat, Aaron (Siegel) and I, did not dictate to A.M. how she should write. We had certain limitations, such as how long the piece would be, but we really didn’t force our aesthetic on A.M. Since we knew A.M.’s work we were confident she would write the kind of libretto that would be right for us.

The more time I’ve spent with Chunky in Heat, I’ve come to find that it is incredibly poetic, but her style of poetry is subtle, so it still feels very conversational.

Since you mentioned Lucas Hnath, I’ll say I’m obsessed with the plays of Annie Baker. I love Paula Vogel and I see and read as many contemporary and modern plays as I can. I do not like most librettos written today or in the past. Most opera companies are too cautious to try anything adventurous. In the rare cases that new work gets presented, the librettos are most often biopics or based on historical events, or are adaptations of movies or Shakespeare. I think we need more original fiction in opera, and that story ought to be important in opera, but many people seem to hold the cynical view that it does not matter.

Experiments in Opera did a program at Symphony Space in May 2017 called Flash Operas. We did six adaptations of very short stories that were featured in the Norton anthology Flash Fiction Forward. Four of the six authors came and took part in a Q and A including A.M. Homes. She was enthusiastic and told us she’d love to work with us. We had loved her story, (Things You Should Know which Miguel Frasconi had adapted and composed music for), so, several months later Aaron and I got in touch with her and we started talking about what eventually became Chunky in Heat. Experiments in Opera programs a variety of different new takes on opera, but one thing we often do is program several short operas together according to different themes. For Chunky in Heat, our initial idea was to do an opera of six short acts that could stand somewhat independently, but that also told a complete story. After A.M. finished the libretto we abandoned that idea because we felt it was really one story. Our thinking about the project evolved and we thought it would create a more unified whole to have the sound of each composer return once or twice, so we decided to divide it up into 14 scenes. Erin Rogers and I each composed three scenes and the rest of the composers each did two scenes.

Aaron and I wrote an opera collaboratively with Matt Welch a few years ago called Sisyphus (all three of us wrote the libretto and  music). Our music fits relatively well together, not that our styles are similar, but I suppose they’re similar enough. For Chunky in Heat we chose three additional composers whose work we liked. Erin Rogers’ music is probably the most different from the rest of ours. Her music is a little more in the traditional vein of avant-garde music, but that contrasted nicely with my music which is more in the style of funk or dance music, and it contrasted nicely with the Burt Bacharach style Bossa Nova piece that Aaron composed in Chunky in Heat. We had a workshop a few months ago to see if everything worked together, and people revised a little after that, but not too much. We didn’t try to coordinate tonal centers or tempos or anything like that. We wrote fairly independently, but with the mindset that all these sections would be connected. For example, for the 12th scene, I composed music that was somewhat static and minimal. I did that because it was toward the end of the opera and I assumed that by that point there would have been a lot variety, and I didn’t want the audience to get fatigued by too many different sounds, plus I thought a certain amount of motionlessness before the last two scenes would set up those two scenes to sound more dynamic and would make for a stronger ending. Finally, our conductor, David Bloom  (music director) is incredibly sensitive and smart, and I think his interpretations helped glue everything together.

Experiments in Opera is a company to watch and enjoy every time they emerge on stage or YouTube.