The Royale by Marco Ramirez 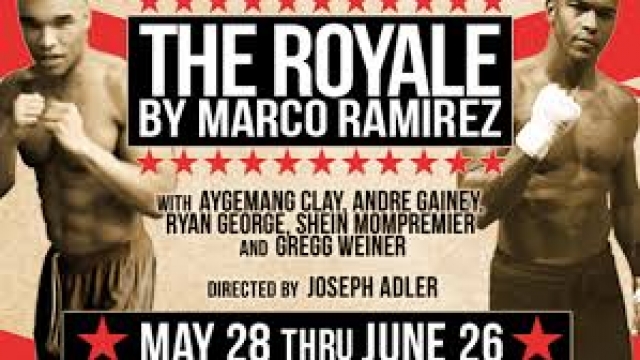 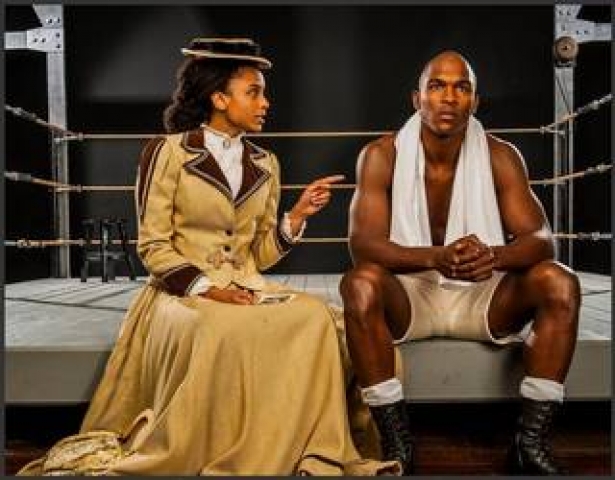 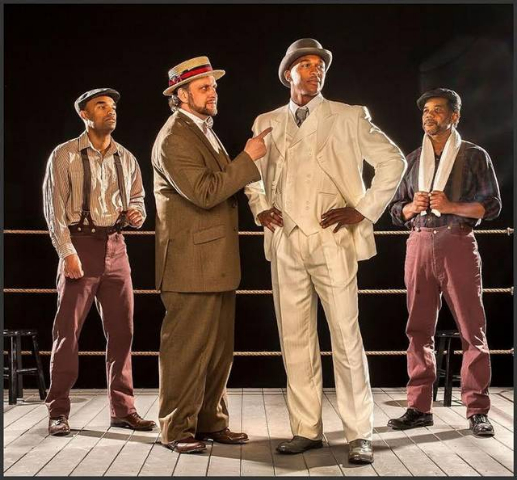 A boxer has enough trouble fighting his opponent.

What if he had to endure two battles during the same match?

Such is the case in The Royale Marco Ramirez’s taut, tough, thought-provoking and riveting play receiving a remarkable southeastern premiere at Gable Stages in South Florida.

The latter part of the play, which played Broadway’s Lincoln Center Theater earlier this year, features one of the strongest, most powerful scenes of dramatic tension I’ve encountered in a theater in a long while.

The scene includes not only physical punches, but jabs of sense and reason a woman is trying to knock into the pride-filled head of her brother. He is Jay “The Sport” Jackson, the Negro Heavyweight Champion of the World. He’s a man full of bravado and cockiness living a little after the turn of the century. It’s the height of the “Jim Crow” era, but Jackson puts no stock in such nonsense. He’s after the top title of Undisputed Heavyweight Champion of the World.

“Given your station, won’t you take added pleasure in fighting a white man?” a reporter asks him during a press conference.

“I never took no pleasure fighting one color over another,” the supremely confident man answers. “I’ll fight anything you put in front of me, Black, white, red or green…”

Whether he really means that, or is merely trying to sound professional and humble in the presence of his peace-keeping trainer and reporters, is a matter of conjecture.

What’s clear is he’s after the title…and nobody is going to step in his way. But what if, in trying to earn the title—whether for him and his fellow African Americans or to satisfy his own bloated ego – he is, ironically, putting black lives in danger?

That’s a central question Ramirez poses in this play – one full of lively, fast-paced dialogue, a protagonist strongly wanting something and palpable tension – all hallmarks of great drama.

Part of what makes The Royale a rich, rewarding play is you don’t have to be able to distinguish a “Bob and Weave” from a “Bolo Punch” to take away something valuable from the work. This isn’t a story solely about boxing.

There’s punching, sure, but there are also non-physical battles-- getting the white reigning champion to agree to get in the ring with a black man, as well as conflicts over pride, ambition, honor, race and the costs of unchecked ambition…to even people who’d normally pull the hardest for a highly ambitious individual with a long-time simmering dream.

One of those people is Jackson’s sister, Nina, a no-nonsense woman with quiet dignity, a sense of pride of her own and a strong will. She’s also, however, a woman who’s thought out the possible consequences of a victory by her brother, and the subsequent title he so covets. She’s feels vulnerable and scared, with foreboding incidents having taken place even before the match of the century: Will she, her children and the black community in general be safe if “The Great White Hope,” in the person of champion Bixby, gets KO’d by her brother…a negro living in the era of “Jim Crow?”

Is the title and all the pride it could bring to the black community worth risking violence against that very community? Does Nina, in wanting to protect her family and the community, actually want her brother to lose?

Ramirez offers no easy answers, as he shouldn’t, leaving us with much food for thought. Topics of discussion will no doubt include the top notch performances from a cast of five and commendable work by the technical team.

One of the potential traps of playing Jackson at the beginning of the play is that, as cocky as he comes across, an actor can render him immediately unlikable -- and therefore not easy to pull for or care about for the rest of the play. In short, he can make the character seem like Donald Trump.

It would be nice to learn a little more about Jackson the man, not just Jackson the fighter. We hear brief speculation from journalists about reports regarding his past, but that’s about it. We do, however, learn an incident from Jackson’s youth that speaks beautifully to the caring person that’s tucked beneath his exterior macho demeanor.

In GableStage’s production, under the astute direction of producing artistic director, Joseph Adler, Aygemang Clay tempers Jackson’s cockiness with a charming smile that will win people over.

Clay also takes advantage of other opportunities to make Jackson seem human, caring and vulnerable. That’s not to say this talented actor underplays the character’s aggressiveness and confidence. He leans forward aggressively while talking to others, ready to pounce on any word he perceives as unfavorable toward him. He literally almost gets in other people’s faces and speaks in a manner to ensure people clearly understand his seriousness about his goals. The actor speaks not just with his mouth, but his entire jaw, showing his teeth and enunciating words.

Shein Mompremier matches Clay’s skill in disappearing into a character. From the moment she walks on-stage, sporting a long period dress, we get the sense of a woman with quiet dignity. But we also see a woman with a commanding air. She won’t be pushed around easily, no matter her skin color.

She addresses her brother, his trainer, Wynton as well as the fighter’s promoter, Max. The latter character also serves as the referee and announcer (Gregg Weiner plays Max, in a performance combining sincerity and devotion during his scenes with Jackson. As the announcer, he conveys sharp showmanship; picture an enthusiastic carnival barker.)

“Did I interrupt something?” she asks (more like demands). “Man at the front said they don’t normally let dark-skinned girls back to see you. Said you developed a taste for something else. I told them he ain’t developed nothing. Jay Jackson’s always wanted the apple at the top of the tree. Told them I should know, I’m his sister.”

Note the italics in Ramirez’s text, and Mompremier ensures those words are emphasized.

As commanding as the actress is in the role, she also invests the character with an intense vulnerability. Tears are visible on her face during a particularly powerful and original scene at the end. You can’t help but shudder at the pain and pleading in her voice.

In the scene, Jackson’s about to fight champion Bixby…except Bixby doesn’t appear (he’s an off-stage character throughout the play). Instead, Nina shows up in his place (is she really there in the ring or is this all in his mind?). Jackson fights an invisible Bixby through action that’s mimed. He hears the motivating words of his trainer (a peace-making, wise Andre Gainey, who, speaking in a scratchy voice, conveys a weariness. It’s as though the older man he’s been through many arguments with his hot-shot fighter). At the same time as trainer Wynton tries to motivate Jackson, Nina is strongly warning her brother of the possible ramifications of his victory. He’s not only fighting his opponent, he’s fighting off the words of his sister and undergoing an inner struggle to concentrate on the match.

At this point in the play, the action appears to have flown by --- GableStage’s production is a mere 70 or so minutes, while the script’s 119 pages of text. The action moves at a rapid, fluid pace, but director Adler ensures we don’t miss a beat. The fast-moving quality of the play can symbolize the idea that Jackson is moving too fast in trying to be on equal footing with whites. This is, after all, the height of the “Jim Crow” era and, as his sister warns him, there could be deadly consequences if he knocks out Bixby. The musical “Ragtime” gives you an idea how blacks were treated, even up north in suburban New York City, shortly after the turn of the century.

“Ragtime” interweaves fictional characters with such historical figures as Harry Houdini, Henry Ford and Booker T. Washington. Similarly, “The Royale” is inspired by a real-life black fighter named Jack Johnson, who lived around the same time as the character portrayed in the play. The real-life Jackson, according to the back cover of the play’s script, “became the most famous and the most notorious black man on Earth.”

“The Royal’s” set around the same time as “Ragtime” and Ellis Tillman’s striking period costumes – a long dress and hat for Nina and fedoras, bowties, suspenders and a pocket watch for the men – beautifully sets us in the early 1900s. Period music before the show, such as “You’re a Grand Old Flag” and ‘Give My Regards to Broadway” also helps set the scene. During the play, action and speech are punctuated by foot stomps and hand claps, adding emphasis to the intense on-stage action. There’s “music,” also, in these rhythmic noises.

Boxing coach Bert Rodriguez has helped the actors playing boxers (including an eager Ryan George as Fish, once Jackson’s opponent, then his sparring partner) convincingly move like prizefighters.

Set designer Lyle Baskin keeps things simple, with a raised platform representing a boxing ring, ropes you’d associate with such a place and a nearby punching bag.

“The Royale” not only shines a spotlight on an “often overlooked story” (words on the back cover of the script, referring to the real-life Jackson) but deals with human issues that can make us look in the mirror and perhaps check our ambitions.

Even if you’re not into boxing, the play packs a powerful punch. And GableStage deserves plenty of praise for pulling the play off skillfully.

The production would no doubt make Ramirez proud.