Lauren Gunderson's The Taming at S&Co. 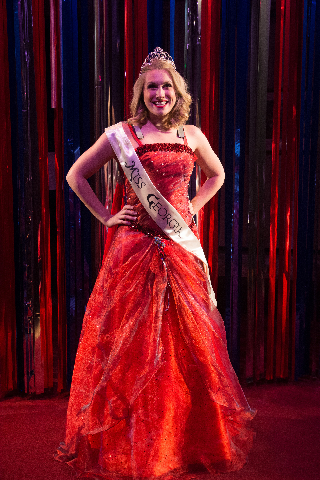 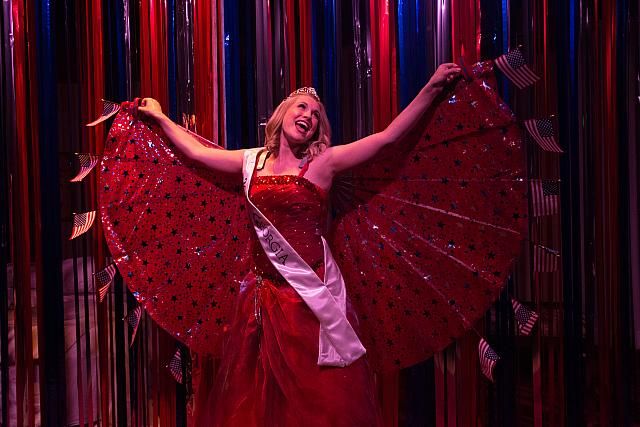 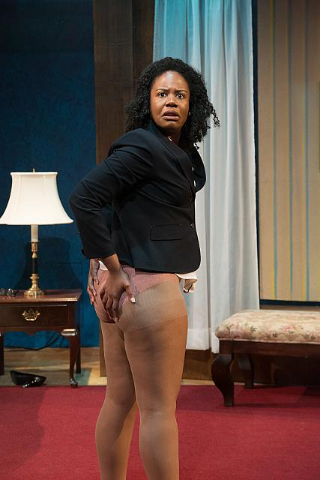 We are embarrassed for Patricia (Tangela Large) literally caught with her pants down. 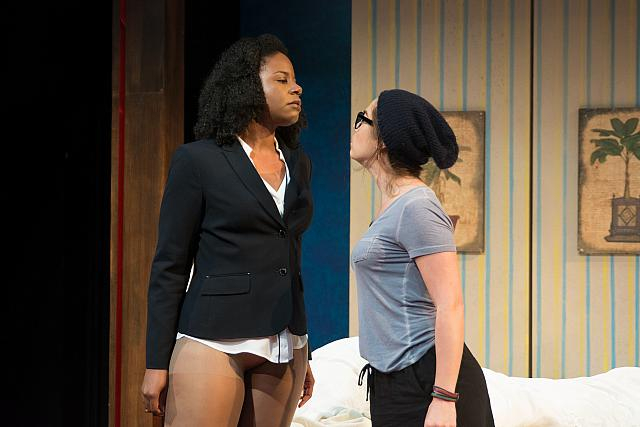 A morning after confrontation with Bianca (Lucy Lavely). 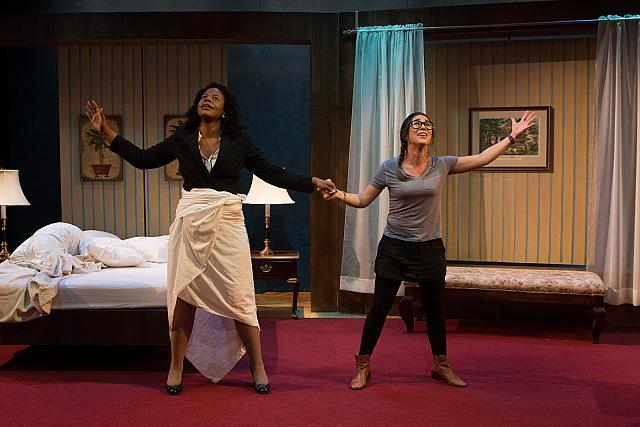 Katherine accessorized with a bed sheet. 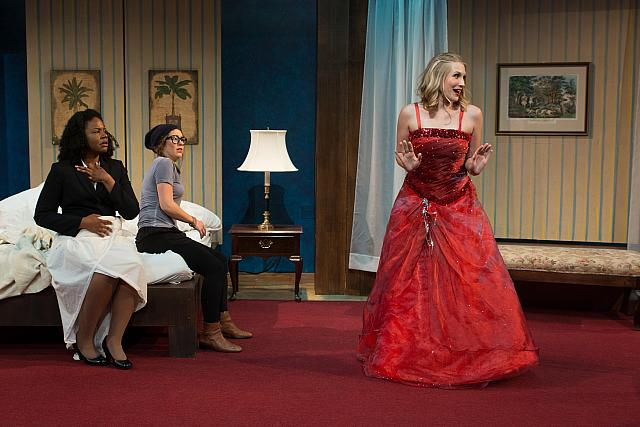 Katherine spinning her absurd plot to rewrite the Constitution.

The thirtysomething Lauren Gunderson is widely regarded as among the best and brightest of the emerging generation of playwrights.

During the 2014 Humana Festival in Louisville, Kentucky she was the keynote speaker for the annual meeting of American Theatre Critics Association. On that occasion she also was the recipient of ATCA’s prestigious Steinberg Award.

Having much enjoyed her perky persona and brilliant insights in Louisville it was with great anticipation that we attended last night’s opening of the regional premiere of her 2013 political comedy The Taming.

For this production S&Co. went all out with limited resources. In the smaller Bernstein theatre there is a more ambitious than usual set by John McDermott that has been adequately illuminated by James Bilonski.

Even before the action commenced we delighted in a curtain composed of bright and colorful mylar strips.

Then in a festive ball gown with suitable tiara Miss Georgia (Maddie Jo Landers) popped out singing a song that comically went on and on. An off stage announcer said it was time to move on to the next contestant. In a smarmy Southern manner this Miss America hopeful hogged the spotlight and craved our attention.

Her hilarious act ended when she unfolded a set of wings spiked with an array of American flags.

It was a harbinger of what promised to be a fun evening.

Then the curtain parted and, well, The Taming proved to be both tame and lame.

Indeed Gunderson is a bright, clever and thoughtful writer. She likes to put a lot of research and big ideas into somewhat feminist tropes. But this time the heady, thought provoking content proved to be a disorienting tsunami.

Get this, the Miss America pageant, and its over the top beauty queen, are a trope for passing progressive legislation and rewriting the obvious flaws in the Constitution.

Patricia (Tangela Large) is the hard working brains behind a powerful but clueless Senator. It seems that she got him elected and now wants to put through a sea changing bill. She is a power on the hill and craves more. Think TVs Scandal for a sense of the ambition of this young, power hungry operative.

Her opposite number is a nerdy leftist blogger, Bianca, (Lucy Lavely) who has compromising images of the Senator and an intern (allegedly her sister). One click of her finger and the cell phone will bring down his political career in a flash.

But, cripes, that all important cell phone is missing. As is Katherine’s indispensable Blackberry.

The women are having morning after flashbacks and recriminations. The strangers have spent the night in a hotel after some Beltway hard partying. Both are nursing hangovers.

Literally, Katherine has lost her pants in what might have been a night of sexual encounter. It’s possible but not plausible.

When inebriated both women admit to being so inclined but it is evident to the audience that they are a mismatch from physical to political. Gunderson has framed them in bright hues of red and blue with Miss Georgia adding the All American white.

This show may play well on the Fourth of July.

Clearly Patricia is embarrassed to be walking around with her butt hanging out in panties and panty-hose. She is literaly caught with her pants down. Indeed we feel for her. Why would Gunderson and director Nicole Ricciardi expose her to such vulnerability? In what sense does it advance her character and the plot? Later, in a gesture of compassion, Bianca suggests that she might use a sheet to cover herself. This just proves to make her look even more ridiculous.

By now we were struggling to find anything engaging about the women and their situation.

Bianca bolts for the door and in my heart and mind I too wanted to escape this hotel room fiasco. But the door won’t open. This evoked Sartre’s No Exit where hell is other people.

Indeed one would hate like hell to be confined to a hotel room with either one of them.

Enter the beauty queen who has locked them in, confiscated their phones, and is having the missing pants pressed. She unveils ambitious plans to rewrite the Constitution evoking the spirit of the founding father James Madison.

There is a fundamental character disconnect here. How on earth can a beauty queen have the acumen and depth to aspire to go deep down the rabbit hole of reforming constitutional law? The notion is just too absurd to catch hold with the audience. This plot point wanders way too far from plausible irony. At best she is more clever and scheming than a vessel for brilliance. Her character is more like riding over Niagara Falls in a barrel. While charmingly serendipitous the odds of success for her political ambition range from limited to nil.

Then, spare me, in the final scene this pretty nitwit is President of the United States of America! The leftist blogger is her press secretary and Patricia is living her dream as chief of staff. Good grief!

This play is described as timely in its pr. Oh well, think Hillary, I guess.

In the reality of the gonzo 2016 presidential race it doesn’t take a clever playwright to concoct such utter madness. In this instance real life trumps artifice.

There is a scene change that sets up a civics lesson about the logjam of the Constitutional Convention. It was supposed to be an exercise in compromise but, as the characters remind us, the South got everything it demanded including the legality of slavery and the populist crushing Electoral College.

For this segment there were terrific costumes by Esther Van Eek. They are outfitted in period dress cut from cloth with the handwritten text of the document. It was a nifty idea.

During the Founding Fathers segment I was of course reminded of the smash musical Hamilton. It covered some of the same themes and comparisons are inevitable. But Gunderson’s play preceded the musical.

Given the limits of the roles the three women put energy and skill into their performances. They are not to be faulted.

Particularly in Lenox at S&Co. ‘The play’s the thing.’ Unfortunately that’s precisely what’s wrong. As Astrid remarked on the drive home from an excruciating evening of theatre “It was a mish mash.”