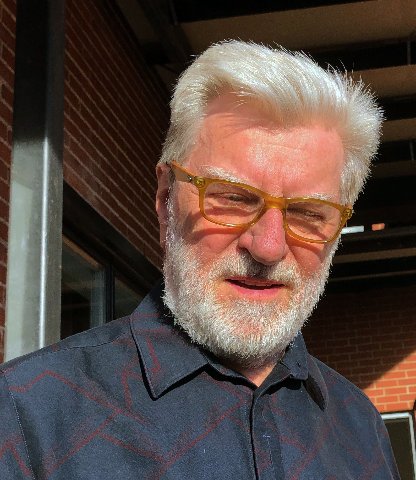 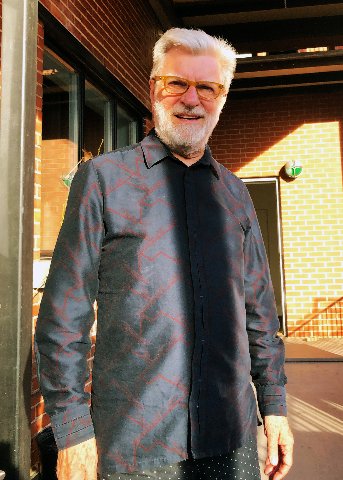 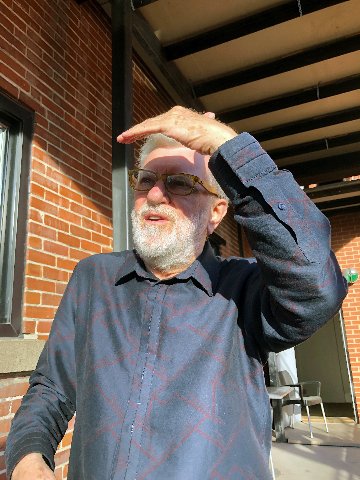 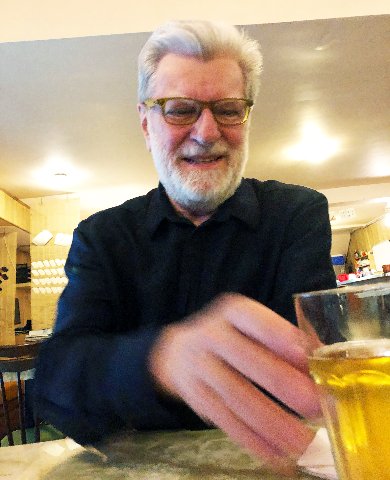 Relaxing over a beer. 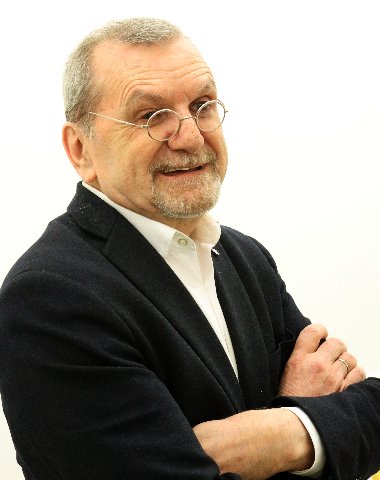 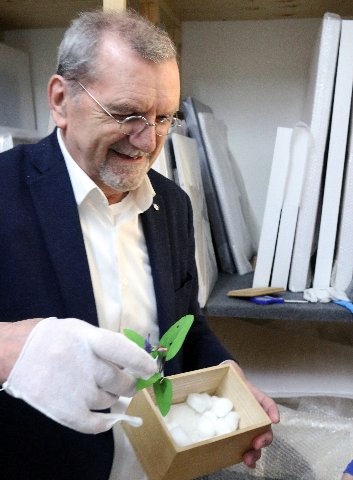 Sharing a fragile work of art. 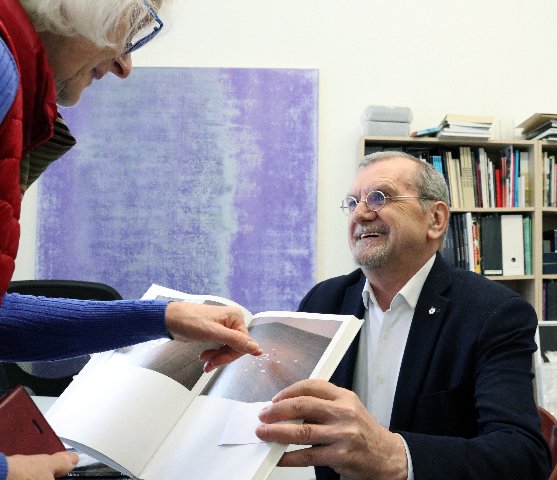 Showing Astrid how it was exhibited.

Some time ago we received an invitation to celebrate the 75th birthday of our friend, the Canadian curator, Claude Gosselin. Tonight, June 5, there will be a celebration packed with friends and colleagues in a hip Montréal bar.

During a recent trip to the city he took us to the bar for a few drinks, snacks and a preview. He was a bit overwhelmed as twice as many individuals planned to come than he had initially expected.

As he spoke with the manager we were intrigued by the piled up dreads of the chic waiter. I dubbed him Medusa for his resemblance to a post modern, snake-haired muse.

It was just an aspect of the lively fun and banter of any encounter with Claude. His every utterance is full of mirth and effervescence.

When we received the invitation we sent regrets. At the time we were focused on travel plans in the U.K. There would be a lot of good natured jokes about how that went south.

It had been some time since we visited Montréal and we discussed a visit in the fall.

For three years in the early 1980s, he was head of exhibitions at the Musée d’art contemporain de Montréal, where he organized shows of works by Robert Filliou, Dick Higgins, Michael Morris and the Fluxus movement.

He was a part of a circle of then young Turks that included Parachute editor Chantal Pontbriand, curators and art dealers France Morin and René Blouin, and journalist Normand Thériault. They were determined to shake things up in an arts community which had become moribund since the vibrant post war group Refus Global. The group of sixteen young Québécois artists and intellectuals included Paul-Émile Borduas and Jean-Paul Riopelle.

With its unique French language and culture Montréal is the most European of North American cities. It has a touch of the avant-garde flavor that Marcel Duchamp captured in a flask as “Fifty CCs of Paris Air” and brought home to his patron, Philadelphia’s Walter Annenberg.

Recalling the ambiance of legendary Paris bars and cafes there is always the sense of dissent and debate when hanging with Montréal’s curators and artists. Early on, like Gosselin, Blouin was a curator for Musée d’art contemporain de Montréal.

As he once told me that ended abruptly. Without being consulted, the museum leased a gallery for a fashion show. He was offended that models were voguing through his exhibition. Storming into the director's office he quit stating that “Your museum is a garbage pail and you are the lid.”

Fed up, the emerging curators took decisive action. As Gosselin told a reporter “I hired René Blouin and Normand Thériault as curators and, in 1985, we did the first ‘Les Cent jours d’art contemporain de Montréal’—a deliberate recollection of the 100 days of documenta. We picked 30 top Canadian artists and framed the show around the idea of installation art in Canada.” The 1985 show, “Aurora Borealis,” featured works by Jocelyne Alloucherie, Noel Harding, Vera Frenkel, General Idea, Tom Dean, Raymond Gervais, Betty Goodwin and Irene Whittome, among others.

Since then Gosselin and CIAC raised millions of dollars for major exhibition projects. There was always a lively mix of the best Canadian and global artists. As curator each project was unique often entailing different locations and themes. For a time CIAC exhibited in its own elegant real estate but mostly it has been a gypsy and opportunist.

There have been installations in the city’s vast, underground shopping network. I vividly recall a huge show in a former Molson’s brewery. Projects have been scattered through the city and one project about gaming was held in a former school building. Often the setting was as significant as the works on view.

Recently at Albany International Airport there was a glitch. In the ticket issued by British Air a letter was missing from Astrid’s first name. Because it didn’t sync with her passport we were bumped off the flight. On the phone with Expedia we ran out of luck.

We were served lemons and turned them into lemonade. Already packed with plans to be away for two weeks. The next day during the drive to Montréal we called Claude. Instead of fall we told him that we would be arriving in an hour or so.

He was in meetings but gave us an address. We punched it into the GPS. Getting into the city with massive construction projects was a nightmare. Coming to detours the GPS often stated “Recalculating the route. In one hundred yards turn slight left.”

Miraculously we found our way. He was standing in the middle of the street. Coming from a meeting he was looking trim and chic. In just fancy pants and shirt it was a typically chilly and damp evening. I was double layered and loaned him a coat which he swaddled in.

In a bit of choreography he walked and we drove to a local boutique hotel. The room was spacious and affordable. The area was in the St. Laurent cluster of shops and restaurants. Putting the car in a garage we walked to a restaurant.

There was that detour to the bar and arrangements for tonight’s party. Adding to our travel woes I was enduring a severely sprained ankle. He kept assuring that it is not far as I hobbled to keep up. We passed a gluten free restaurant that we opted for the next night. Claude also recommended an upscale French restaurant not far from the hotel.

That first night we shared a tasty and cheap meal of Vietnamese pho. There was a lot of catching up including the demise of  Biennale de Montréal. Being “of a certain age” the board of CIAC ousted him as director opting for new leadership. That did not turn out well.

With emotional emphasis he stated that Canada no longer has a Biennale. That has occurred without a whimper of protest from artists. Lacking that support in their own nation few if any Canadian artists are being invited to the global network of biennials. An exception is the Canadian pavilion at Venice. It owns real estate along with other nations. Often, however, the most interest and energy focuses on what’s staged in the Arsenale and around the city.

Now 75 Claude is fit and as energetic as ever. He still travels and described a couple of months in China exploring projects. With a new twist he has a generous budget to develop a collection for a new hotel.

The next night, after dinner, we were invited to his home. He was coming from yet another meeting and due to catch an early train to Toronto. That’s headquarters for the hotel project.

We much enjoyed seeing his collection that takes up every inch of wall space. From flat files he showed us a portfolio of stunning, surreal photographs by an artist commissioned for the hotel project.

As we were leaving he insisted that I take a copy of the 1987 “Stations” project. I saw that show and the catalogue is in the Canadian section of my library. It was inspired by a series of painting by Barnett Newman. Comprising Fourteen Stations the artists included: Ulay and Marina Abramovic, John Baldessari, Georg Baselitz, Louise Bourgeois, Eric Fischl, Leon Golub, Betty Goodwin, John Heward, Marcel Lemyre, Duane Michaels, Josef Felix Muller, Bruce Nauman, Arnulf Rainer, and Nancy Spero.

What a devastating loss for Montreal and Canadian art that shows of that originality, insight and quality no longer exist. With a touch of melancholy and loss we raise a glass to Claude. His contributions have been immense and the best is yet to come.