Death of the Author at LA's Geffen Playhouse 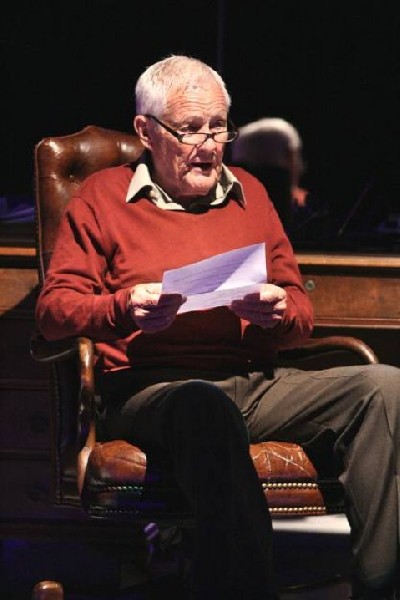 Orson Bean has a gem of a role. 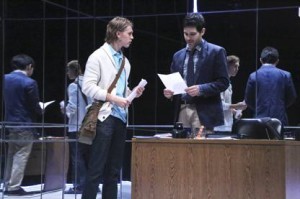 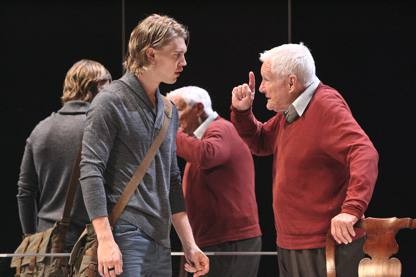 If one is interested in plays about the good old days of the early twentieth century of academia when students were just students with boy meets girl problems – like Andy Hardy – and the faculty were in charge to satisfy their lofty and imperious careers at their whim, perhaps you should put the kettle on and rent a DVD of “Goodbye Mr. Chips” from Netflix.

The world premiere of “Death of the Author”, which opened on May 28, on the stage of the Geffen’s Audrey Skirball Kenis Theatre in Westwood is an updated twenty-first century version of similar problems, but with a modern twist. The students are almost, but not quite, in charge of the academic asylum. At least one student, however, thinks he has found a way to game the system by cutting corners – in a word plagiarism. But there’s more to the core story than just plagiarism. It merely sets the play’s action in motion.

This interesting, engaging, dramaedy written by playwright and Pulitzer Prize nominee Steven Drukman, comes to grips with the reality and intensity of just how important and essential it is for students of the 21st century to get those eye-popping grades that open doors at America’s elite Universities and Colleges. After graduating, one can parlay that piece of sheepskin into a long and successful business career if one is clever and lucky enough.

Drukman’s multi-layered text of ambition, heartbreak, and cutthroat competition that is now center stage in American culture is not only cleverly written it is also funny. The opening night audience, heavily weighted with young people in their twenties, and students from UCLA, caught and punctuated with laughter, every nuance and irony of the situations the characters found themselves in. It’s a toss-up as to whom the audience was rooting for: rules vs. creative options. Apparently, situation ethics is still alive and well in academia.

“Death of the Author”, is helmed by talented award winning director Bart DeLorenzo who follows Jeff, a bright, young, adjunct college professor (understatedly played by David Clayton Rogers who inhabits the unsung plot role and thus has to do the heavy lifting) suspects one of his students of plagiarism. It’s only a few days before graduation. His inquiry and subsequent meeting with graduating senior Bradley (solidly portrayed by Austin Butler) ignites a chain reaction of events that affect the lives of four characters in a very short time frame. Jeff’s eccentric mentor and legendary/celebrity department head J. Trumbull Sykes, a scheming, witty and sly survivor of many academic and bureaucratic wars who prefers dry martinis and off campus conversation to actually running a department, is portrayed by scene-stealing Orson Bean in a little gem of a performance.

The lone female in this ensemble cast is Lyndon Smith, who as Sarah, plays the ex-girlfriend of Bradley and has the pivotal role that affects all the characters. Anything more comes close to a spoiler alert. Plays that have plagiarism as a subject usually leave the veracity or conclusion of the issue up to the audience to decide for themselves. Ambiguity is usually a safe zone for playwrights. I think this observation applies to “Death of the Author”.

The creative team led by DeLorenzo includes: Scenic Designer Takeshi Kata, who makes an interesting choice in designing three walls of his set in floor to ceiling mirrors, which then presents his Lighting Designer Lap Chi Chu with the challenge of lighting an all-mirrored set. Costume Designer Christina Haatainen Jones, provides the proper look in her costuming of all the academic characters.

Playwright Drukman and director Bart DeLorenzo deliver lots of options for the audience to ponder in this intriguing and entertaining production. “Death of the Author” at the Geffen Playhouse is performed without an intermission and runs through June 29th.