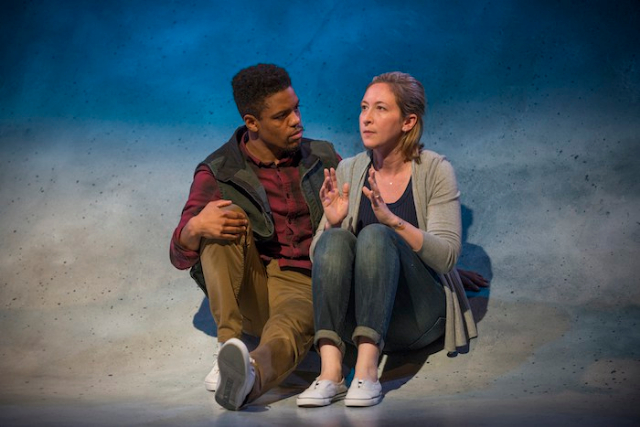 Constellations, the new two-character play at Steppenwolf Theatre, is certainly a nonlinear story. Marianne (Jessie Fisher) and Roland (Jon Michael Hill) at times seem to be in parallel universes. She, an academic theoretical physicist, and he, a beekeeper.

Their story, written by Nick Payne, is the cycle of love and the angst of miscommunication. They meet, fall in love, live together, commit infidelity, break up, get together again, marry, endure illness and face death. And they take ballroom dancing lessons. The 80-minute production is also brimming with intriguing intellectual dialogues and monologues about quantum mechanics, string theory, bee colonies, free will and time. But don’t fret if you’ve forgotten everything you learned in college physics. Payne writes Marianne’s excursions into physics in a disarmingly offhand way.

Marianne is diagnosed with a brain tumor that explains why she has been having trouble speaking and typing. A scene in sign language dramatizes her precious cognitive ability. In other scenes, she and Roland go back and forth about treatment and its ultimate resolution. Is it grade one or four?

Marianne: The basic laws of physics- The b-b-basic laws of physics don’t have a past and a present. Time is irrelevant at the level of a-atoms and molecules. It’s symmetrical. We have all the time we’ve always had. You’ll still have all our time. There’s not going to be any more or less of it. Once I’m gone.

The scenes in Constellations repeat each other, double back and repeat again, sometimes with text changes, sometimes not. Roland prefaces a marriage proposal with a speech about the simplicity and inevitability of the lives of bees, which defines the ability to make choices as very human. Playwright Nick Payne shows us a realistic relationship between two people with its ebbs and flows over time. It makes you think about your own relationships, past and present. Really, would you say any of them have been shaped in a linear fashion?

Jonathan Berry’s excellent direction paces the scenes seamlessly and yet makes the characters’ verbal feats perfectly clear to the audience. Jessie is brainy, articulate. Roland, although coming from a different background, is serious and thoughtful as he listens to her conjectures on life and relativity. After leaving the play, I could not get it out of my mind. And the more I thought about Constellations, the clearer it seemed that Marianne’s and Roland’s story could not have been more lucid or more beautifully constructed by playwright Payne. A love scene progresses like this:

Marianne. Quantum mechanics focuses on the quantum realm. Atoms, molecules…. On nuclear and atomic scales, gravity is pretty much insignificant. But in terms of General Relativity, it’s vital.

Marianne. So you’ve these two theories that are completely at odds with one another. Relativity covers the sun, the moon, the stars while quantum mechanics takes care of molecules, quarks, atoms- that sort of thing. We’ve effectively asked the same question twice and come up with two completely different answers.

Roland. This is really sexy by the way.

Marianne. But now we’ve got String Theory. Or, to be a bit more specific, we’ve got lots of different string theories-

Roland. If you’d rather I didn’t stay you just have to say.

Marianne. And the exciting thing about String Theory is that it potentially bridges the gap between Relativity and-

Roland. You haven’t answered either of my questions. (Marianne kisses Roland.)

Marianne. A by-product of every single one of these theories – almost entirely by accident – is the possibility that we’re part of a Multiverse.

The flow of scenes is enhanced by the gloriously minimalistic set design by Joe Schermoly. Set in Steppenwolf’s Upstairs Theatre, the backdrop is a beautiful, billowy wave or cloud of offwhite sculpted material. On either side of the stage are geometric metal frames that occasionally snap and sparkle, like lightning or perhaps the synapses of the brain. Heather Gilbert’s lighting design guides us through the narrative. Christopher Kriz created sound design and original music.

British playwright Payne’s work has won recognition in the U.K and the U.S. Constellations played on Broadway last year and his newest play, Incognito, deals with matters of love and neuroscience. Clearly, he’s a writer in the mold of playwright Tom Stoppard and novelist Richard Powers. Payne also adapted the Julian Barnes novel, The Sense of an Ending, for film; it’s to be released this year. (In two sentences, I have managed to name three of my favorite writers!)

Constellations continues at Steppenwolf Theatre through July 3 with performances Tuesday through Sunday. Tickets can be bought for $20-89 online or by calling 312-335-1650. Accessible performances include American Sign Language interpretation on Friday, June 17, open captioning on Saturday, June 25, and audio description and touch tour on Sunday, June 26.