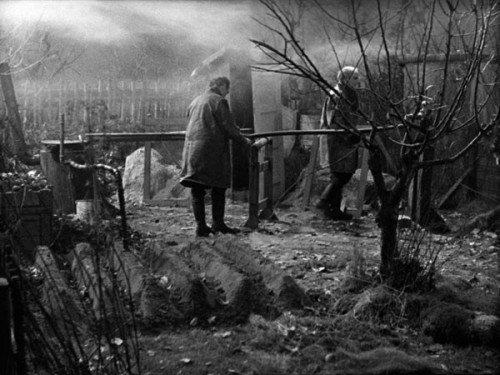 The Solomon R. Guggenheim Museum has opened two additional galleries to complete its presentation of the full-rotunda exhibition Haunted: Contemporary Photography/Video/Performance. Newly featured works by Thomas Demand, Stan Douglas, Christian Marclay, and Jeff Wall as well as live performances by Sharon Hayes, Joan Jonas, and Tris Vonna-Michell extend the exhibition’s investigation into themes of memory, trauma, repetition, and appropriation through the use of reproductive media. Ongoing public programs including a symposium on performance on June 17–18 will complement the exhibition.

The schedule for performances and summer public programs offered in conjunction with Haunted is as follows:

Artist Stan Douglas (b. 1960, Vancouver) will speak about his work. Douglas uses forms of popular entertainment—cinema and television—to destabilize narratives that depict society as a unified, homogeneous front with one history, one set of desires, and one value system. His film installation Der Sandmann (1995), on view in Haunted, investigates the intersection of history and memory as witnessed against the backdrop of post–Cold War Germany. Projected as two separate but intersecting 16mm films that show a community garden in use during the 1970s and as a construction site some 20 years later, Der Sandmann contemplates temporality and the transformative effects of history. Following the program, guests are invited to enjoy a private exhibition viewing and reception. Tickets are $10, $7 for members, and free for students. For tickets, visit guggenheim.org/publicprograms or call the Box Office at 212 423 3587.

Sharon Hayes (b. 1970, Baltimore) uses video, installation, and performance to delve into the politics of language, desire, and protest, as manifest in both personal and public realms. Through a practice of “respeaking,” her work highlights uncanny instances of resonance between recorded historical texts and our present political moment. As part of Haunted, Hayes will stage a unique sonic event on the Guggenheim’s Rotunda floor in which she will act as a DJ, spinning vintage spoken-word records that refer to moments from throughout the history of the twentieth century. Free with museum admission.

The performance work of Tris Vonna-Michell (b. 1982, Rochford, England) unleashes a barrage of words and images that mine the boundaries of personal memory and narrative fiction. His live, uninterrupted soliloquys, accompanied by 35mm slide projections from his personal archive, often take the form of erratic travelogues that rapidly plunge into alliteration and free association, intertwining history and autobiography. For Haunted, Vonna-Michell will perform recent work in an intimate setting just off the museum’s spiraling ramps. Tickets are limited; further information to be announced soon.

to consider the opinions of a panel of experts, engage in commentary, and participate in a live chat session. This installment of Guggenheim Forum takes up repetition as cultural and artistic motif. As conventionally imagined, modernity is tied to the idea of invention. But that impulse has been counterbalanced by one toward repetition and a return to the past. Our panel asks whether modern times are obsessive-compulsive; whether our psyches really require us to reenact traumatic events; why reenactment has become an important device in contemporary art; and how the relationship to repetition varies across creative mediums. The conversation will be moderated by Simon During, author of Exit Capitalism: Literary Culture, Theory and Post-Secular Modernity (2010). Panelists include Drew Daniel, author of 20 Jazz Funk Greats (2008) and member of experimental-music group Matmos; John Malpede, founder of the Los Angeles Poverty Department; and Amy Taubin, contributing editor of Film Comment and Sight and Sound, and author of Taxi Driver (2008), a BFI Film Classics book. To participate, visit guggenheim.org/forum


Artist films presented for Haunted: Contemporary Photography/Video/Performance will be screened every Friday in July and August in the New Media Theatre. For more information, visit guggenheim.org/publicprograms

Additional educational programs including gallery tours and family activities are being presented under the auspices of the Sackler Center for Arts Education throughout the showing of Haunted. For updated information regarding programs, visit guggenheim.org/education