If You Knew Sushi 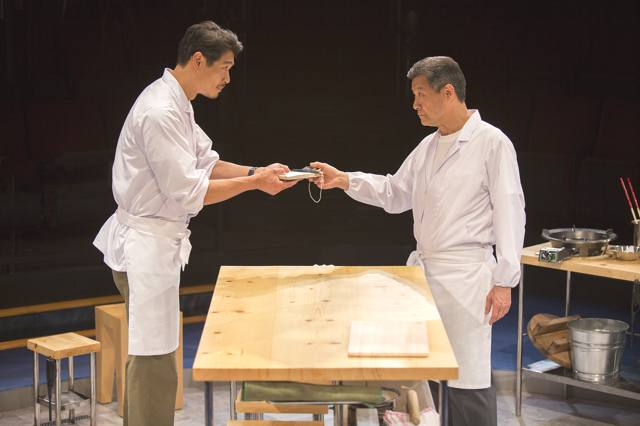 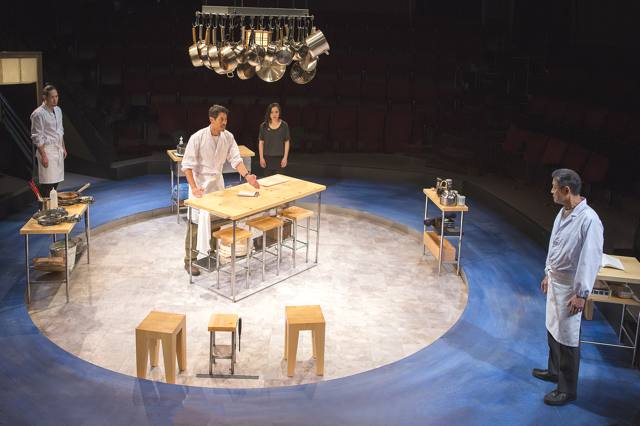 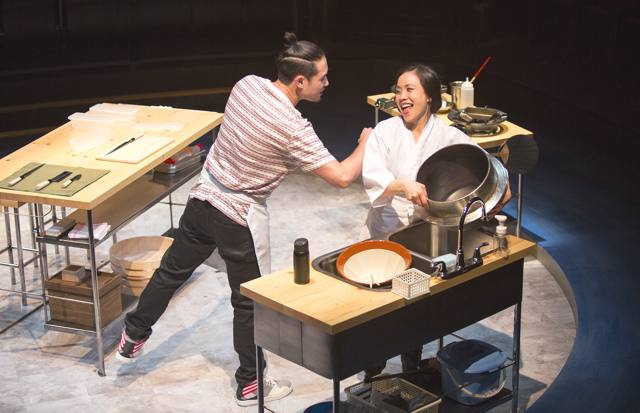 Japan as an Island country had been insulated, by choice, from outside influences for centuries. Its culture and customs were relatively unknown to Westerners until the 16th Century.

The Japanese people have always taken pride in their more measured lifestyle with its appreciation for patience, regimentation, introspection, and discipline along with a respect for periods of silence and reflection both at work and at home.

When it became time for East to meet West in the modern era, food as usual, was the vehicle that crossed the cultural bridge bringing people closer together. Which brings us to the just opened Old Globe production of “tokyo fish story”, insightfuly written by Kimber Lee, and creatively staged by May Adrales.

The story is set in present day Tokyo and centers around Master Sushi Chef Koji who carefully and methodically built his successful career on respect for tradition, fine ingredients, and the legends of master sushi chefs who came before him. But now his once famous restaurant is losing its customers to newer and glitzier sushi eateries. Here as everywhere, it’s time for the new and younger generation of restauranteurs to take over. But tradition in Japan dies hard.

Koji (stoically but solidly played by James Saito) is having a crisis of aging in a modern society that seems indifferent to his personal business philosophy and work ethic. He misses the respect and the attention to detail required that present day sushi chefs cavalierly fail to bring to their profession. The pursuit of money not deserved at the expense of his customers is not a factor that consumes Koji’s days and nights. Now if only his small staff could embrace that philosophy.

Takashi, his assistant sushi chef (wonderfully played by Tim Chiou) has been a sushi-chef-in-training, mentored by Koji for years. However, he has not been allowed to create his own sushi delicacies. Koji feels the time isn’t quite right (even after 20 years of loyal service).

Takashi, however, knows he is ready to step up but doesn’t quite know how to broach the delicate subject with his mentor/boss. It’s a familiar problem in small or family owned businesses worldwide.

Pecking order for employee in restaurants everywhere are rigid and fixed; in Japan even more so. Just as Takashi must wait, so must Nobu, a hip-hop-talking assistant, winningly played by Raymond Lee. According to the director’s program notes Ms. Adrales’ vision for the comedy/drama has staged the action of the play into areas: The restaurant where the chefs prepare and serve food and the fish market where owners and chefs come every morning to inspect and test the fish for quality, freshness and taste before purchasing what will become that evening’s sushi entrees.

Tina Chilip, portrays two roles: Ama Miyuki, an experienced sushi kitchen staff employee, and a mysterious female sea siren seen only by Koji. As a female, she is subject to deferring to less skilled male employees when opportunities for promotions come along. Jon Norman Schneider plays six roles performing yeoman duty in all six. As the clutzy busboy/dishwasher comic relief on Koji’s staff, Schneider’s character is like a fish out of water. Woe betide the restaurant that hires this eager but clumsy busboy/dishwasher.

The beauty and enjoyment of this richly and inventively staged production lies in the supremacy of style over the prosaic substance of narrative. Ms. Adrales’ decision to have 99 percent of the action in the restaurant, when it comes to food preparation and clean-up duties, mimed by the actors in sync with a technically-pure sound design by Charles Coes and Nathan A. Roberts is touch of genius. The audience becomes, not only fully engaged in the story but also is fascinated and mesmerized by what takes place in a sushi kitchen, further enriching the visual experience (at least for this audience member).

There is nothing better than watching talented actors working with an experienced director who brings his or her personal vision to the production, and then allows the talent of the actors to take flight. “tokyo fish story” is a ‘small’ story beautifully realized with tender loving care.

The technical and creative team led by director Adrales features an eye-catching glistening kitchen set design by Mikiko Suzuki MacAdams, along with spot-on, authentic, costumes designed by David Israel Reynoso that shine under a lighting design by Jiyoun Chang. The terrific sound design team of Charles Coes and Nathan A. Roberts, was highlighted above earlier.

“tokyo fish story” is a splendid production that performs, without an intermission, on the Sheryl and Harvey White Theatre Stage and runs through June 26, 2016.