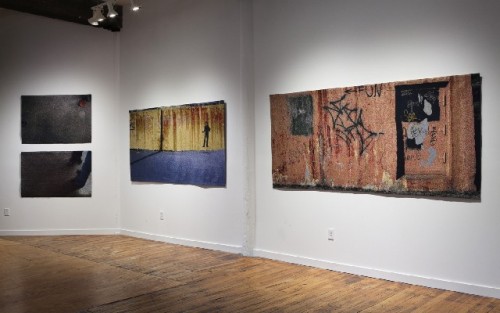 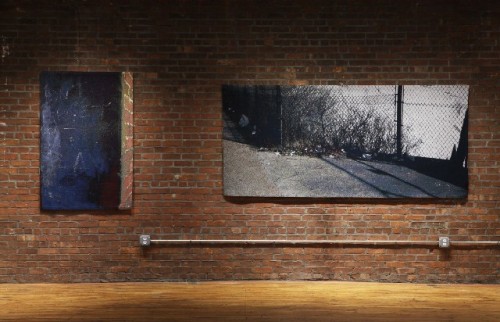 AnotHer her view. Photo: Roman Iwasiwka 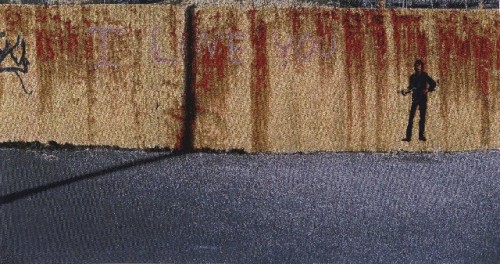 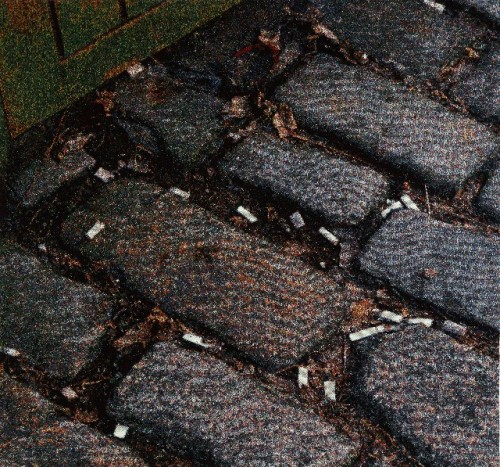 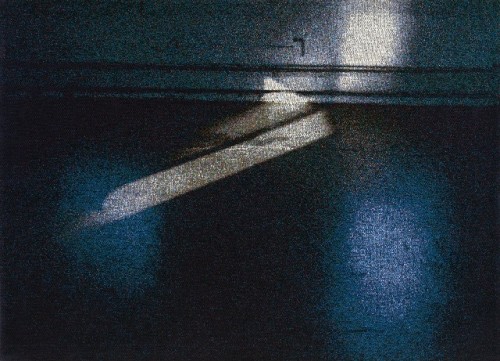 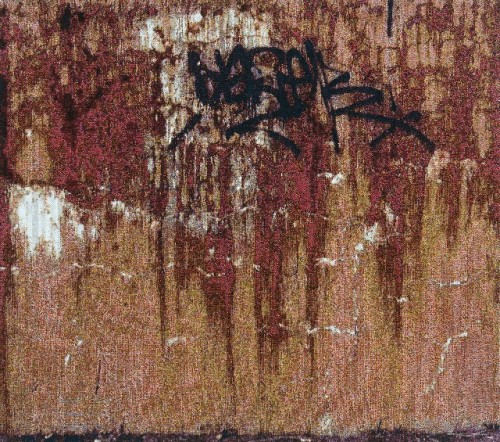 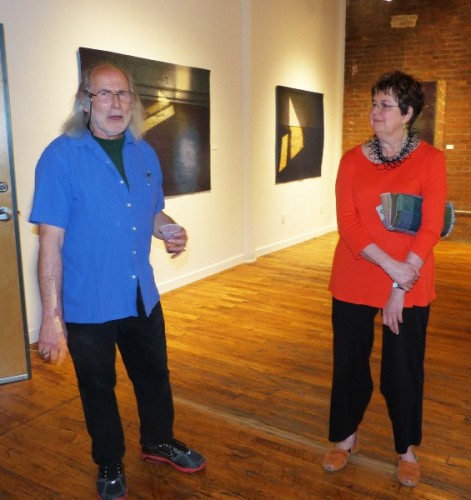 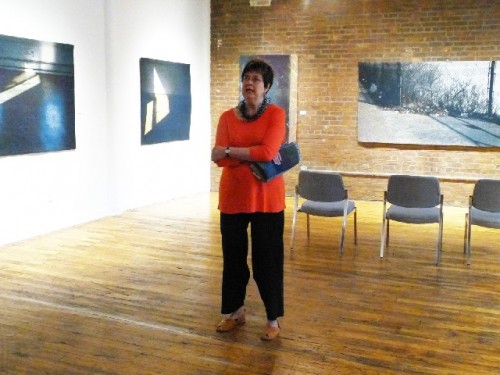 Vera surrounded by her work. 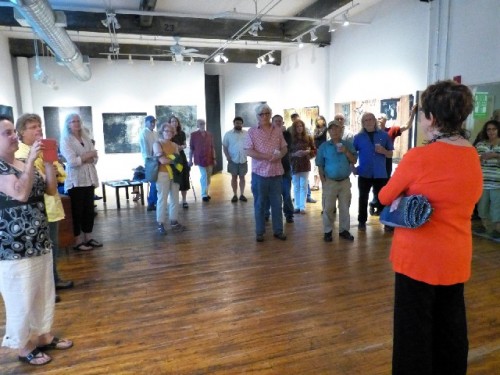 Discussing her work during the opening. 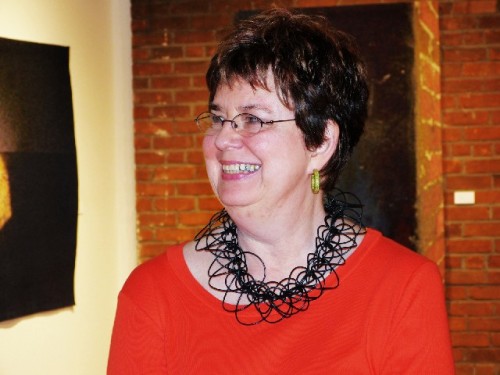 The artist enjoying the occasion.

Launching its summer season the Eclipse Mill Gallery, at 243 Union Street in North Adams is presenting a one woman show by Betty Vera Hiding in Plain Sight through June 29. The gallery in the artist/ loft building is open from noon to six from Wednesday through Sunday.

The Eclipse Mill like others in the Northern Berkshires was based on King Cotton during the 19th century. Driving a cotton based economy there was a dark side to the region’s legacy through direct involvement with slave labor in Southern plantations and exploitation of child labor. Photographer and social crusader Lewis Hine documented children posed in front of the Eclipse Mill and other area mills.

As a resident of the Eclipse Mill Vera, in an extensive artist’s talk during the opening, spoke about wanting to bring cotton, her primary material, back to the region as a way of binding up the raveled sleeve of care.

Trained in painting and drawing she later took a course in weaving. “I was hooked” she said emphatically.

This later led to graduate study in fiber art and design.

There are looms and walls of colored thread set up in her studio. It is slow and meticulous work. She became interested in the high speed digital process of Jacquard weaving.

The Jacquard loom is a mechanical loom, invented by Joseph Marie Jacquard, first demonstrated in 1801, that simplifies the process of manufacturing textiles with such complex patterns as brocade, damask and matelasse. The loom was controlled by a "chain of cards", a number of punched cards, laced together into a continuous sequence.

Multiple rows of holes were punched on each card, with one complete card corresponding to one row of the design. Chains, like the much later paper tape, allowed sequences of any length to be constructed, not limited by the size of a card.

Vera stated that the use of punch cards with its yes/ no  sequences represented the basic concept that led to the development of computers. But the more advanced technology also led to an unwelcome change. Previously the multiple rods of the complex and slow process were hand manipulated. The mechanized process led to protests when many workers were fired.

“To stop the looms which were putting them out of work they tossed their sabots, or wooden shoes, into the looms” she said. “From that action came the term sabotage."

Each position in the card corresponds to a "Bolus" hook, which can either be raised or stopped dependent on whether the hole is punched out of the card or the card is solid. The hook raises or lowers the harness, which carries and guides the warp thread so that the weft will either lie above or below it. The sequence of raised and lowered threads is what creates the pattern. Each hook can be connected to a number of threads, allowing more than one repeat of a pattern. A loom with a 400 hook head might have four threads connected to each hook, resulting in a fabric that is 1600 warp ends wide with four repeats of the weave going across.

For advanced study of the medium and process she attended the Montreal Centre for Contemporary Textiles as well as The Jacquard Center in Hendersonville, NC.

She came to think of individual threads as pixels of color. By combining a vast range of these threads, which one may observe in small details of the works on view, she was able to achieve subtle nuances of shade, and tonality.

In state of the art technology the artist sends a Photoshopped digital image to the apparatus. She explained that it is not as simple as it sounds as there are many decisions from a range of possibilities.

The notion of the exhibition Hiding in Plain Sight is a comment on her celebration of the seemingly ordinary. Vera photographs things which she encounters that are so ordinary that we look at but don’t see them. Through a transformative process we are invited to look long and hard at patterns on a wall, graffiti, or worn cobble stone scattered with cigarette butts from workers on break.

For me the most absorbing and galvanic work is a full scale reproduction of a section of fence with its great array of tonalities and details of weeds and detritus. It is truly a grand and virtuoso piece.

While it is possible to create editions because all of the information is contained through individual files Vera described the gallery full of works as “one offs.”

When the actual pieces are created the artist is allowed to observe but not touch or interfere with the elaborate process. Hands behind her back, as instructed, she leans forward and watches the fabrication with remarkable speed. She is able to observe instantaneously what is drawn out and daunting when hand weaving. Because of the noise generated by the apparatus she is required to wear ear plugs.

The exhibition provocatively conflates aspects of photography and fiber art.

She discussed one image of an empty dark room with a geometric pattern of light illuminating the base board. It was the empty studio she encountered when arriving for a residency. There is that familiar challenge, like a blank white canvas, of how to fill and transform its initial emptiness. In this piece that became her subject.

Discussing each work in the exhibition we learned that they all come with rich and personal associations.

This is not what one encounters during a visit to an absorbing exhibition curated by the perceptive gallerist Ralph Brill.

For some visitors the mundane imagery, particularly the subtle dark on dark tonalities of her “abstractions,” will be undecipherable. There is of course a legacy of such imagery in the photography of Aaron Siskind.

In our media saturated society we have come to have ever shorter attention spans. We are programmed to “get it” instantaneously. We are not inclined to spend time with dense works that, as is the case here, yield their secrets slowly.

If you examine the weavings closely the detail and complexity is astonishing. What from a distance merges into a “photographic” image is in fact meticulously crafted with a vast range of threads that approximate the grain of photographs or pixels of digital imagery.

There is a tendency to want to touch and feel the works.

Because of their fragile surfaces and delicate nature that is not allowed.

To satisfy that urge the artist has included a segment of the Fence, a sample if you will, which we are encouraged to handle and turn over to see its back.

This is an exhibition that will truly change how you look at the world.