Hairspray is a Show for Our Times 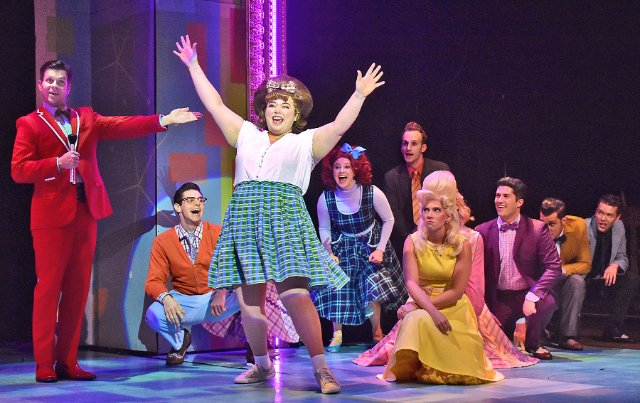 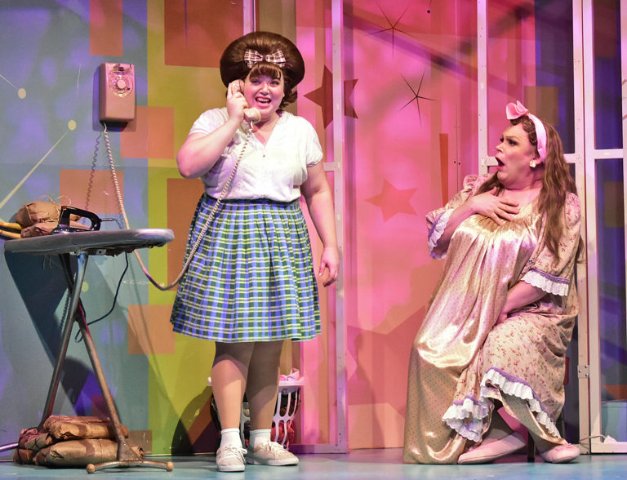 My eyebrows shot up in surprise as I learned that the 2002 Broadway musical Hairspray would follow Cats on Sir Andrew Lloyd Webber’s YouTube channel, “The Shows Must Go On!”

The award-winning and renowned composer-lyricist had understandably featured his shows on the channel he created to keep theater lovers entertained during the pandemic. But what did Hairspray have to do with Lloyd Webber? As it turned out, it was just the kind of show the nation needed to see, given African American George Floyd’s murder at the knee of a white policeman, as video from a cellphone shows.

True, Hairspray does not offer the most in-depth examination of racial relations and tensions in America. Further, the characters tend to be one-dimensional. And heroin Tracy Turnblad accomplishes her goals too easily and quickly, with little resistance.

But despite the show’s shortcomings, its setting of early 1960’s Baltimore feels eerily similar to 2020 America. Moreover, it's hard not to feel rejuvenated and inspired by Tracy's winning personality and resolve. She possesses spunk and an indomitable spirit suffuses this bubbly, plump and positive high school student with big hair and an even bigger heart. She is, unapologetically and without hubris, herself.While watching her, you might think about the many young people today who are peacefully protesting and advocating for change. Of course, many young people living during the 1960's also stood up for their beliefs.

Indeed, the early 60's was a time of protest, rebellion, violent demonstrations, and upheaval. It wasn’t until 1964, two years after Hairspray’s setting, that President Lyndon Johnson signed the Civil Rights Act of 1964. It superseded all state and local laws requiring segregation.

Fortunately, today we do not have laws requiring segregation. But just about a year ago, an Alabama newspaper editor called for the Ku Klux Klan to “night ride again.” Surely, with hatred, stereotyping, and violence sullying society today, the plague of racism understandably leaves people feeling helpless and hopeless. Fortunately, shows such as Hairspray exist to leave us feeling just a little more empowered and rejuvenated. Among the musical’s messages are that ordinary people, like Tracy, can do their part to help affect change. The steps may feel like "baby steps." Even so, when taken together, they can amount to significant progress.

Hairspray can also inspire us to take pride in who we are and "be" ourselves -- even in the face of adversity. Adversity comes in two forms in Hairspray. One is the narcissistic and prejudiced Amber von Tussle, the bratty, selfish resident princess of "The Corny Collins Show." In Hairspray, it's a fictional TV program featuring teenage dancing and contests. Velma von Tussle is Amber’s overbearing mother. Velma pushes her daughter to be a star and tries to keep only white teenagers on the program.

Unfortunately, in today's bleak world, there are plenty of Amber von Tussles and Velma von Tussles. No doubt, we need more Tracy Turnblads, Edna Turnblads, and Motormouth Maybelles. The courage these characters demonstrate feels as refreshing as inhaling a sea breeze while sipping a tropical drink. Ditto for the show-stopping song at the end, "You Can't Stop the Beat." Its infectious, upbeat melody carries a mood of celebration and the desire for change.

It's also refreshing to watch actors fully inhabiting these characters . That is the case in Hairspray Live! on Andrew Lloyd Webber’s “The Shows Must Go On!” YouTube channel. Hairspray Live!, which aired live on NBC in 2016, is a performance of a new adaptation of the musical. In the production, Maddie Baillio lends Tracy a bubbly and spirited demeanor. It’s contagious -- and you want to go near this charismatic character to catch it. And just listen to Baillio as she growls while singing some of the show’s lyrics. This performer’s ability to growl helps convey the character’s spunk and indomitability.

Meanwhile, the great Harvey Fierstein, in drag, imbues Edna with the requisite flamboyance. In addition, the actor endows Edna with a touching modesty. But Fierstein's Edna also convincingly grows into a self-confident, but not arrogant, wife and mother.

Then there’s Jennifer Hudson as Motormouth Maybelle, the host of "Negro Day" on WZZT-TV, which airs once a month. Hudson invests Motormouth Maybelle with grace, elegance, and a sympathetic, encouraging air. With these characteristics, it makes sense that Maybelle would help Edna find pride in herself and emerge from her shell.

On the other hand, the von Tussles degrade the Turnblads. And Dove Cameron (Amber) as well as Kristin Chenoweth (Velma) bring the right mix of self-superiority and spitefulness to the story’s villainesses.

As you watch Hairspray Live!, you might feel a need to find the Tracy or Edna Turnblad within you, as well as the Amber or Velma von Tussle lurking inside you. In addition, you might ask yourself what you can do to help affect change in our broken society. Quality theater (and film) can move us to look inward and take action -- just as Tracy Turnblad does, making her a role model for all.

Hairspray Live! Is available on platforms such as Vudu (Vudu.com). But Hairspray isn’t the only show that seems so timely right now. With that in mind, here are some other plays that, when you read or watch them, might make you feel like you’re reading today’s newspaper – and could spur you to take action to help improve society.

This bold and original, intriguing, and mysterious play is based on real-life events and strongly calls to mind the “Black Lives Matter” movement. Today, it’s among the organizations that are speaking out in the wake of George Floyd’s death. Ijames could’ve penned a naturalistic play condemning the killing of young black men and women by law enforcement. But this playwright displays a daring that’s refreshing. His style clearly communicates his exasperation with the seemingly countless number of African Americans senselessly gunned down.

Ijames, who writes with a sarcastic, satiric voice, puts human faces on the staggering statistics. They're real, flesh and blood people, not just numbers. Raw feelings of fear, anger, frustration and vulnerability animate the play. Ijames sets the piece  Ijames sets the piece in a place, but where is this place? That is open for debate. What’s clear is that Isa, Grif, Tiny and Daz, all young, black males, have died too young.

“Seriously, I mean, you like to think we’re moving beyond all this. I’ll be honest, I think it’s gotten worse,” a character says in White Guy on the Bus, a drama with incredibly high individual stakes. This play is Bruce Graham’s riveting, complex, brutally honest piece about race.

Graham uses disturbingly direct language throughout. The play is about revenge, moral ambiguities, political correctness, image, and racial accusations. But Graham offers no easy answers. White Guy on the Bus is compelling, in part, because it’s hard to brand the characters as simply good or bad. And we shift allegiances several times.

You can also buy the script for White Guy on the Bus through Dramatists Play Service by visiting https://www.dramatists.com/cgi-bin/db/single.asp?key=5505.

In this brutally honest and heartbreaking play, a woman implies that what happened to Emmett Till in 1955 could happen to her teenage son today. Demos-Brown’s taut, tense, timely, tragic, and riveting play doesn’t sugar-coat the dark, yet painfully real truth about our racially divided world.

You can purchase American Son through Concord Theatricals at https://www.concordtheatricals.com/p/65467/american-son

Race deals with a host of issues. They include gender and racial bias in the workplace. Also, the unabashedly direct, often vulgar, yet poetic Mamet (his “profane poetry” can leave us winded) constructs a labyrinth of bias, hubris, shame, guilt, deception, regret, perception, exploitation, and ambiguity. After all, who said race is a neat, simplistic, straightforward concept? Instead, it’s a simmering volcano -- and it has erupted countless times, with often devastating consequences.

You can buy the script for Race through amazon.com.

This is a haunting, heartbreaking, richly symbolic, frank, yet compassionate novel that won author Harper Lee the Pulitzer Prize. It centers on a white lawyer defending a black man accused of rape in Jim Crow era South. The story makes us examine our conscience and consider our own prejudices. Also, Lee draws us in to her compelling narrative and makes us feel connected to the well-drawn, recognizable characters. Further, there's just something about including children as characters in a tale about danger, a time of darkness, and irrationality that makes the story more palpable. Perhaps their non-judgmental, rational, and good-natured outlook endears us to them, especially during dark times. Also, our maternal or paternal instincts might kick in. Therefore, we want to shield the youngsters from the harsh reality the tale depicts.

You can buy the script to a stage adaptation of Mockingbird by visiting  https://www.dramaticpublishing.com/to-kill-a-mockingbird-t34. Of course, the novel is also available through amazon.com and in stores as well as libraries. Finally, you can see a different adaptation on Broadway once the Great White Way re-opens. That is, if you can get at ticket. Aaron Sorkin's adaptation is "the most successful American play in Broadway history. It has not played to a single empty seat," according to the the TV news program "60 Minutes."