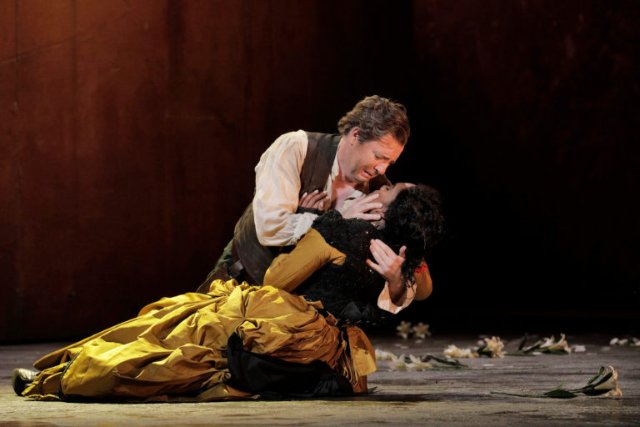 Few operas in the catalogue claim the staying power of Georges Bizet’s Carmen. Perennially among the most performed operas worldwide, aficionados and novices alike support its popularity. And what’s not to lirnke? Its strikingly original (yet selectively adapted) music captures the sense of its locale as few other operas. What’s more, a seductive heroine, a sacrificial suitor, and a love triangle lead inexorably to a gripping and tragic conclusion. San Francisco Opera’s current production of this classic pleases the eye and the ear.

Carmen is a cigarette factory worker whose sultry self confidence and independence set her apart. But her fiery temperament lands her in trouble. When arrested for instigating a fight, she induces the fawning soldier Don José to let her escape, for which he receives time in the guardhouse. With Carmen on the run and José disgraced, they join a band of smugglers, and their destinies spiral downward.

For those drama devotees who argue that fiction needs characters that the observer can empathize with, this work may defy that dictum. The actions of both lead characters reveal deep flaws and self-inflicted wounds. Carmen’s pride and arrogant willfulness prime her for a fall. It’s hard to sympathize with her because she invites conflict by constantly crossing the line with peers, lovers, and authorities. Conversely, José shows weakness of character by numbly chasing an impossible dream. Though offered the comfort of the virtuous Micaëla, he foolishly jeopardizes his career because of his puppyish infatuation for Carmen and then abandons righteousness altogether. But the audience remains engaged with these characters through the powerful music and the action.

Bizet’s score offers highlights for the title character throughout, starting with her capricious entrance aria, the Habanera “L’amour est un oiseau rebelle” (Love is a rebellious bird). J’Nai Bridges debuts the role and offers visually striking appearance and movement. Her vocalizations are true, and her low end displays strong conviction. Overall, however, her voice is somewhat cloaked, lacking the penetration to maximize dramatic impact. Carmen’s other Act 1 aria is the equally memorable seguidilla “Près des ramparts de Sévilla” (Near the walls of Seville). But despite these beautiful numbers and the enchanting children’s chorus, the opera hits full stride only in Act 2, with the gypsy song and girls’ chorus accompanied by tambourines, followed by the stirring Toreador song, which introduces “the other man.”

Remarkable for a lyric tenor in great demand for over two decades, Matthew Polenzani performs his role debut as Don José. He suits the part well, demonstrating pleasant vibrato and excellent control over dynamics. He particularly caresses and then builds passion in “La fleur que tu m’avais jettée” (The flower that you threw to me), exhibiting to Carmen the dried flower from her that he had saved as a symbol of his love.

Other notable numbers abound for the leads, but the second principals deserve mention. Kyle Ketelsen as Escamillo does a fine job with the Toreador Song and Anita Hartig is captivating as Micaëla, especially in her prayer for courage “Je dis que rien ne m’epoyvante” when she seeks José in the den of smugglers.

The overall feel of this Francesca Zambello led production is very strong. The stage is dominated by large, orange-ochre, stucco-looking facings. Other than cutouts for doors and windows, they appear as canvases to be decorated with the scores of wonderfully costumed performers who swarm the stage throughout the production. One downside to the set is that it represents all of the venues of the opera, including the mountain hideout, so authenticity and variety are sacrificed for cost savings. Lighting is used to great effect. Underlit throughout, but with strategic spot lighting, the look provides warmth yet artistic contrast.

Carmen is conducive to fresh, modernized productions, often with changes in time period, geography, and more. Here we have a traditional approach, including the original spoken dialogue, which mark it as an opera comique. This rendition confirms why the opera has stood the test of time.

Carmen, with music by Georges Bizet, libretto by Henri Meilhac and Ludovic Halévy, and based on the novel of the same name by Prosper Mérimée is produced by San Francisco Opera and plays at War Memorial Opera House, 301 Van Ness Ave., San Francisco, CA through June 29, 2019.