Tanglewood and Pops for July Fourth 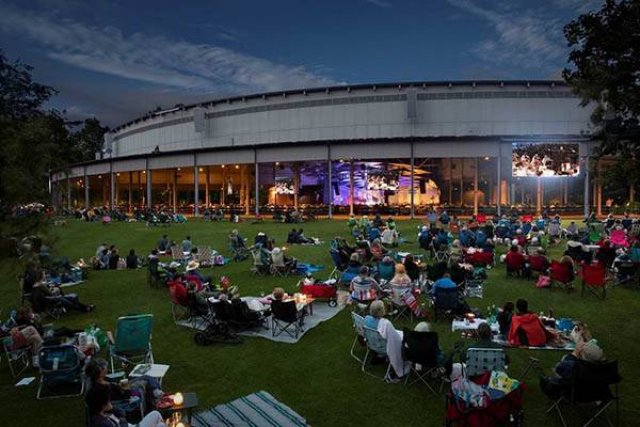 This 2021 Boston Pops July 4th Spectacular will be a televised, live-streamed concert to take place under the direction of Keith Lockhart from the stage of Tanglewood’s Koussevitzky Music Shed, Sunday, July 4, 8-11 p.m., broadcast live on Bloomberg TV and Radio, as well as locally on WHDH-TV Channel 7. The Boston Pops will partner with the City of Boston on a live fireworks display from the Boston Common, bringing the closing portion of the July 4 event back across the state to the city that has proudly presented this iconic, large-scale event since 1974. The Boston Common fireworks display will be carried by Bloomberg and locally in Boston on WHDH-TV Channel 7.

Keith Lockhart, who will direct his 26th Fourth-of-July program as Boston Pops Conductor, will lead a program featuring the extraordinary talents of headliners

In addition, the Six-String Soldiers of the U.S. Army Field Band—the most-followed military music group in the world—and members of the United States Air Force Band’s Singing Sergeants, the official chorus of the USAF and the first premier military chorus to enlist women—will be featured in small ensemble and choral selections during the evening’s performance. Among the quintessential patriotic selections to be performed are

"The Star-Spangled Banner," a salute to our armed forces medley, a patriotic sing-along, and the Boston Pops’ signature piece, "The Stars and Stripes Forever." No Boston Pops July 4 concert would be complete without a performance of Tchaikovsky’s "1812" Overture, which, in traditional style, with live cannons and bells, will bring the musical portion of the evening to a close. Hosts for the July 4 program will be Bloomberg’s Alix Steel, Romaine Bostick, Janet Wu, and Joe Shortsleeve.

FREE TICKETS FOR SPECIAL GROUPS AND THE GENERAL PUBLIC, WITH A TICKET REQUIRED FOR ENTRANCE TO THE GROUNDS; CONCERT STRICTLY LIMITED TO AN AUDIENCE OF 9,000, PER ALLOWANCE SET BY LOCAL AUTHORITIES
To kick off the opening of the 2021 Tanglewood season, the Boston Pops will work closely with partner organizations to invite and provide tickets to a special audience of veterans and other military groups, first responders, health care workers, community groups, and sponsors to attend the July 4 program as guests of the orchestra. Additional free tickets will also be available for the general public, though everyone will need to obtain and present a ticket to gain access to the grounds. These tickets will be distributed on a first-come, first-served basis, with a four-ticket per household limit and available only through www.tanglewood.org/July4, starting Monday, June 21, at 10 a.m. There will be an attendance cap of 9,000 for the July 4 concert, in accordance with an issuance by the Berkshires’ Tri-Town Health Department that limits the capacity of all 2021 Tanglewood season concerts to 9,000. Click here to view press release about attendance cap and other protocols for 2021 Tanglewood season.

DECISION TO MOVE THE 2021 BOSTON POPS JULY 4TH SPECTACULAR TO TANGLEWOOD
After careful consideration of recent issuances from the Centers for Disease Control and Prevention and the Commonwealth of Massachusetts easing restrictions on masking, physical distancing, and capacity allowances, the Boston Pops determined that in order to best ensure the health and safety of everyone involved, it was prudent to postpone its return to the Esplanade until 2022, when there would be adequate time to plan and execute the complex event, which usually entails a ten-month planning process involving multiple government agencies and many event and concert planning organizations. Owned and operated by the Boston Pops’ parent company, the Boston Symphony Orchestra, Inc., Tanglewood has the video-capability infrastructure in place to record the concert in a cost-effective way—an important consideration following a year of lost revenue in the millions of dollars due to 16 months of concert cancellations related to the COVID-19 pandemic.