Not a Rose or Heide Is Not Heidi 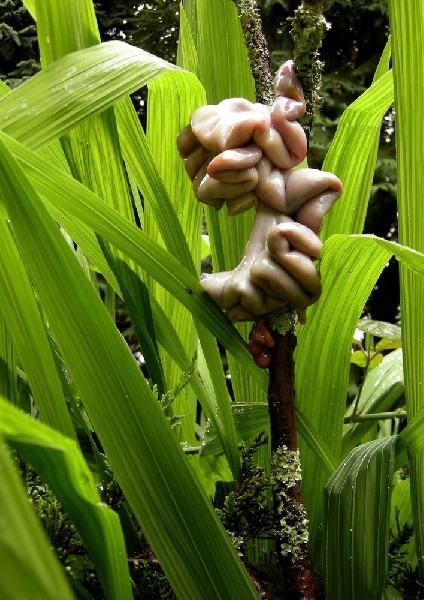 Some artists are so outside the box that it appears impossible to insert them into any kind of narrative.

Heide Hatry’s most recent efforts contained in a book of photos and numerous essays written about the work, at first glance seem to be one of those that defy labling. To put an artist back in the box, although maybe not an obvious one, is a task I often use in writing my blog. It is probably due to having read too many social theorists, who for example see Impressionism as the outcome of urbanism disrupting our easy relationship to things at hand.

I know for sure that this appears to many to be just another procrustean bed, where the poor artist gets his or her limbs lopped off to fit some notion of their life in a time and space. But in fact it works the other way around. Inserting the artist into a context can actually bring them alive. It gives them eyes and ears to the influences around them. Hermeneutically we are always working with preconceived ideas.

Heide Hatry’s latest work , displayed in the book “Not a Rose” could be analyzed aesthetically. She uses animal organs to reconstruct them in the shape of flowers. She does it so well that you do not recognize the photos taken of these short-lived constructions as being made from offal, recently collected from the abbatoir. The intelligence and talent of the artist is obvious. There appears to be an understanding of ikebana judging from the adroitness of the “flower’s” arrangement.

To look at the work solely in terms of its aesthetics, is not satisfactory. Moreover, structural analysis may not tell the whole story either.

All artists use raw material to shape objects that transcend their origins. El Anatsui for example takes tin cans and bottle caps to weave wall hangings. As artists we are all involved in transformation of one material into another reality. Paint becomes light. Glass becomes a flower. But the outrageousness of using butchered animals as the literal raw material to create flowers, makes it impossible to leave her floating outside of the box. Sheep clitoris becomes a daisy. Something needs to be unpacked. What is she up to?Where is she coming from... One hint is to be found in her work that precedes this recent body of work. Portraits of women with the faces made out of pigskin, that at first glance appear quite real. Not the tanned version on a football but the real flesh, whose shelf-life I have heard from a gallery assistant unfortunately got extended once beyond the expiration date.

For me this portraiture points to an obvious influence: Hatry is looking at Cindy Sherman and enters into the realm of identity politics. Identity politics deconstructs the social image(the face) as being infinitely pliable so as to free it from whatever society might impose on it.

There is no permanent self because there is no self to begin with, just myriad images we can concoct at will. We see a face that looks like Marilyn Monroe, only to see that momentary recognition questioned by the disturbing suggestion that this is an invention made of animal flesh. These deconstructive notions of self have permeated our world to such a degree that Hillary Clinton can in a calculative way change her image from one public event to the next. One day she is dowdy, the next sexy, or scholarly.

Accepting the image that society expects of you is no longer an unshakable burden. Another obvious influence comes from one of the most famous contemporary artist as provocateur: Damien Hirst, who is famous for displaying in a glass box a whole sheep embalmed in formaldehyde. The use of this noxious fluid recalls the work of another artist, Serrano’s “Piss Christ”. Hirst’s embalmed sheep remains one huge affront to human sensibility. The goal of the artist as provocateur is to mix objects or activities that rarely share the same space in order to shock the bourgeois sensibility that needs to separate out human activities in order to function.

The first time I understood this ploy was in Mapplethorpe’s photo of a man dressed in a suit with his substantial penis hanging out of the open zipper. Two different realities, ”suits”, the costume of business, ”cock” the reality of in this case of homosexual sex. If the body had been totally naked we could have entered into the allowable social category of the nude. But the two realities are shown together and create a good deal of cognitive dissonance. Is this what Hatry is doing?: quaint flower arrangements done by the museum docents conflated with the reality of the harvested sexual organs of animals.

Two categories of experience normally separated. On the one hand we have the decoration or gift of choice for weddings, birthdays and funerals, so intergrated into our cultural norms, with its notion of evanesce, delicacy and hope.

To make them out of animal parts that have never been used in those contexts before succeeds in destroying the flower as vehicle for reverie. The perfume and delicacy of the flower is the product of the plants sexuality.

Hatry seems to be a woman on a mission to abolish all separations of human activity. She brings the abbatoir into the flower shop. Her own little shop of horrors. This balancing act is more interesting than Hirst and even Hatry’s earlier work which shows her butchering animals and wallowing in the blood. The subtle weaving of bourgeois notions of beauty and the reality of carrion where the flesh is almost flower and the flower we imagine almost flesh is mesmerizing and straddles exquisitely the fence of tradition and taboo.

Since the 19thc “Epater le bourgeoisie” has been the preferred habit of avant garde poets and artists . Take the bourgeoisie’s shibboleths and show their hypocrisy. The world of work and production, of science and industry has been built by separating out many of our activities that were once accomplished side by side. Dialectically to criticize these disparities has been a powerful force for social change.

Animals are raised in industrialized settings far from view by transient labor and end up in packages in the antiseptic supermarket. Hatry’s earlier work showing her performing the slaughter herself tries to bridge that gap. Hatry’s goal in “Not a Rose” is to show that the sexual organs of a sheep can be as beautiful as flowering plants. However, a flower is as much about air and perfume as it is about physical construct. She succeeds more in cutting away our need to believe in delicacy and nuance. She can’t have it both ways. She uses the delicacy of flowers to validate the beauty of animal life but takes it away from flowers. Moreover, breaking down the walls between categories of human activity is a dangerous game.

Jeffery Dahmer comes to mind as someone who saw people as food or the making of lampshades from human skin in Nazi Germany is another. Animal rights activists seem to think Hatry is working on behalf of animal liberation.

It remains an integral part of our culture of gifts, recognition and reciprocity. I suppose to liberate it from the greenhouses where it is mass produced, would be a nobler cause for Heide to pursue.

Trying to conflate the world of animals and those of plants is more than slightly diabolical and has more in common with genetic engineering, which is currently blending animal and plant genetic material.

Maybe the shock of the new will pass as the shock value of so much critique of social norms fades with time. Mapplethorpe’s photos seem dated probably because the separation of public and private(parts) is not longer so extreme. Ads for erectile disfunction are commonplace and condoms are handed out at school. …Or Serrano’s Piss Christ is no longer effective when the object of its derision the Catholic Church is in such disarray.

I hate to think what societal norms will have to expire for Hatry’s work to be commonplace.