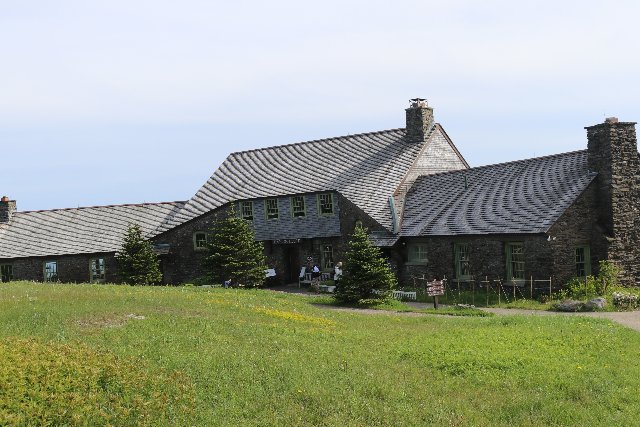 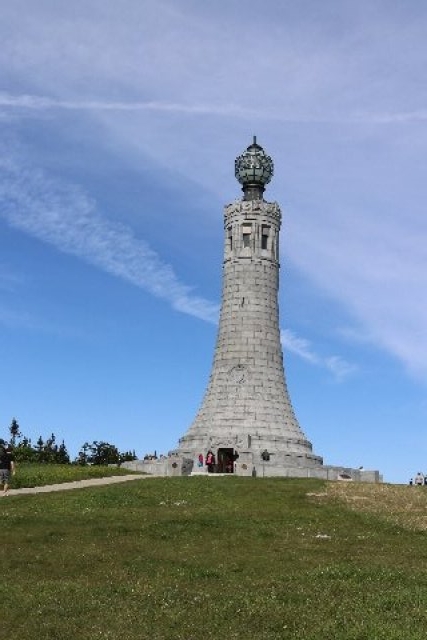 The monument and beacon was recently restored. 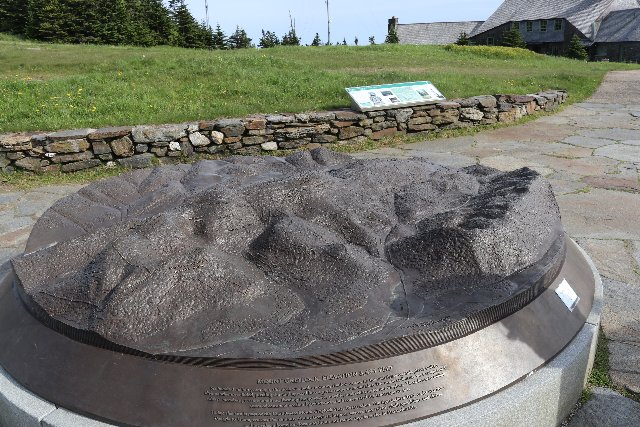 A bronze relief of the surrounding terrain. 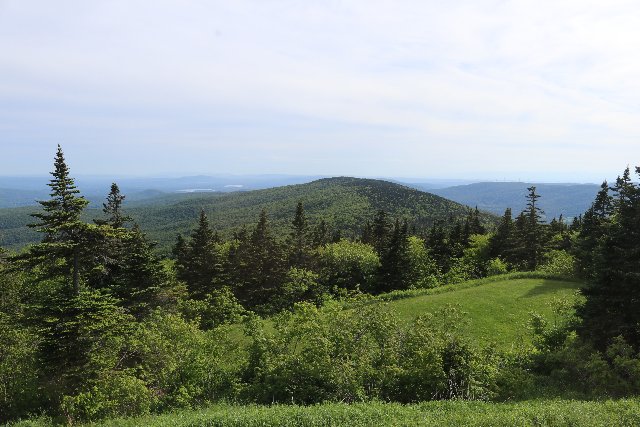 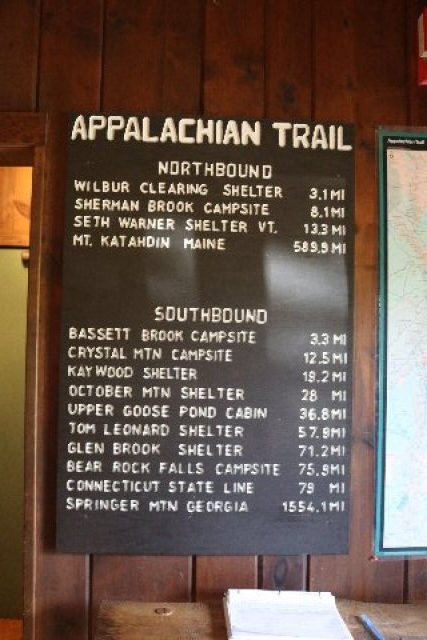 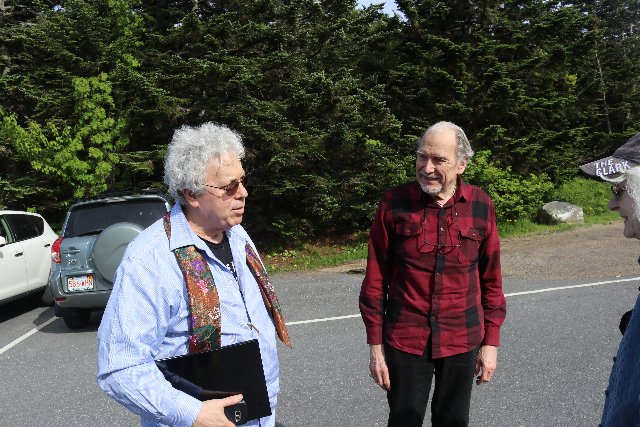 Peter Bergman and Bob Bruyr arriving for the event. 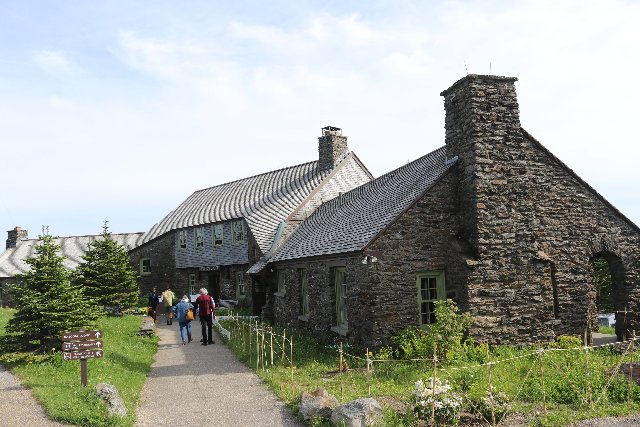 End view of the lodge. 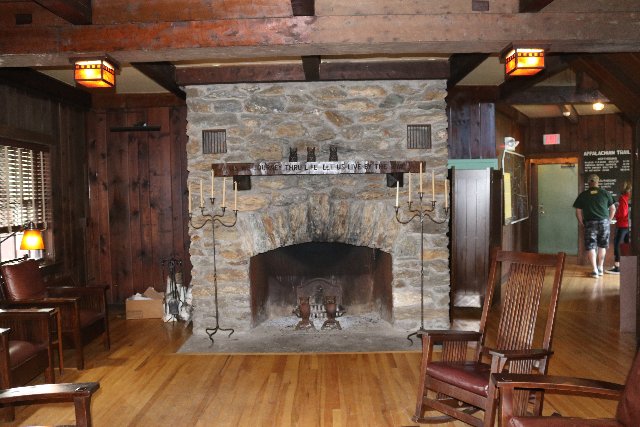 The hearth wards off a chilly evening. 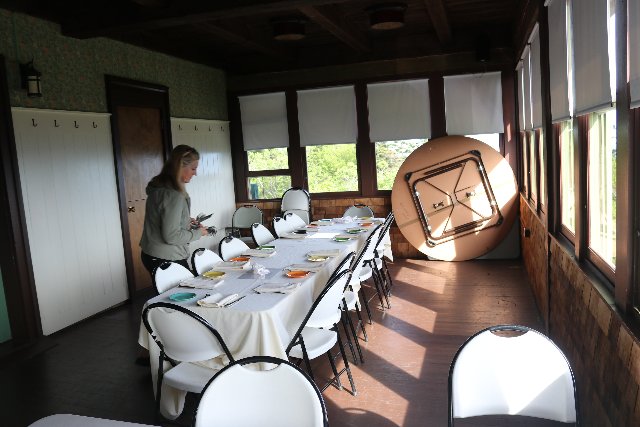 Setting up for dinner on the porch. 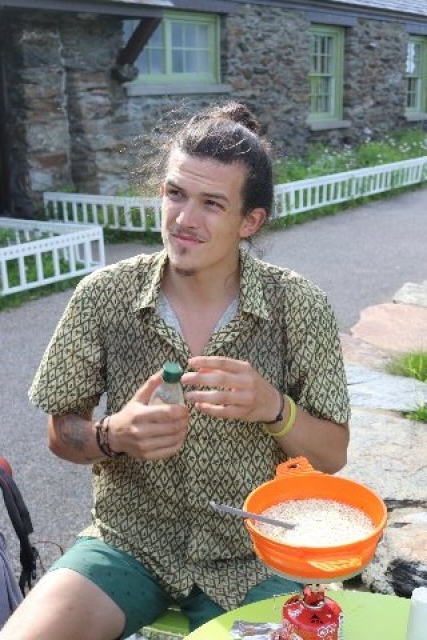 Jake who has been hiking since February prepares a meal. 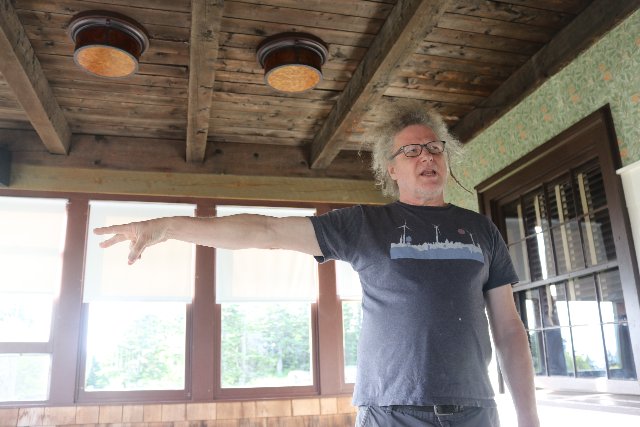 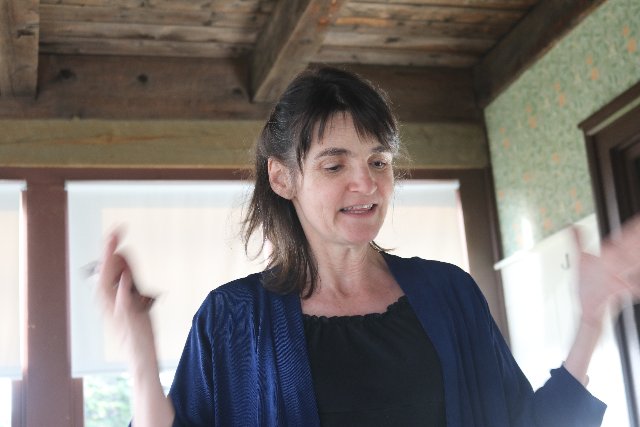 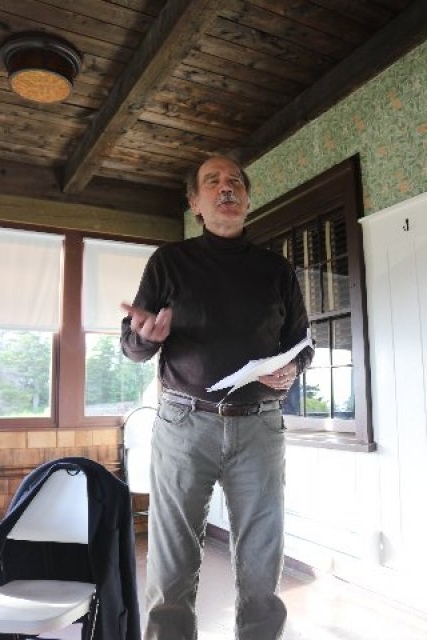 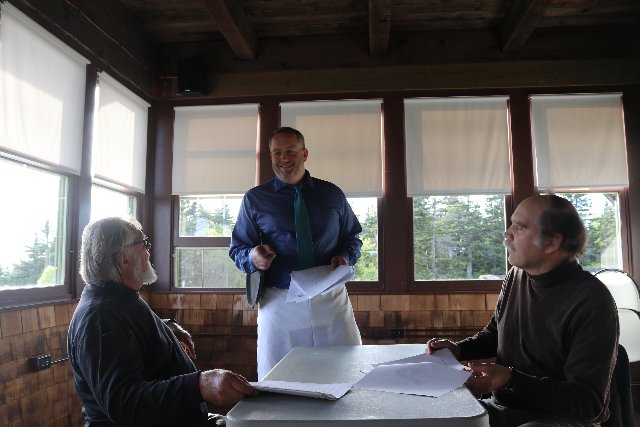 Chris Tucci (the waiter) hopes to impress the Bard, right, and a famous actor, Benjamin Luxon. 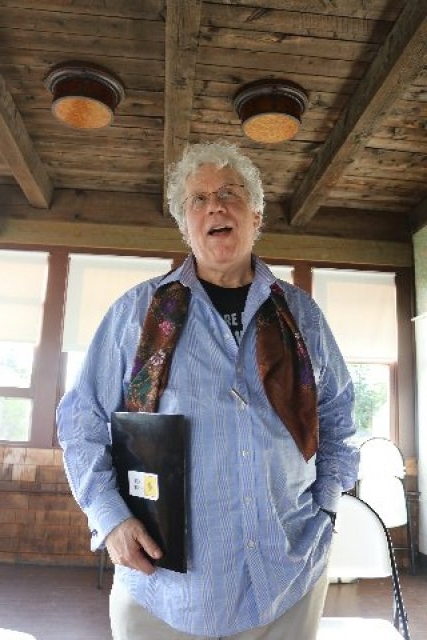 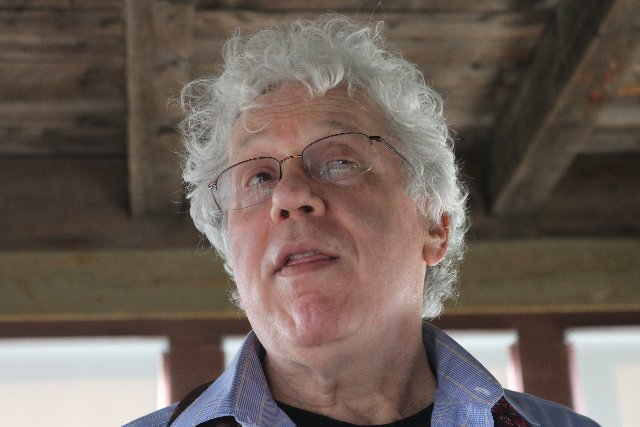 Introducing the first reading of his "Her Report Card." 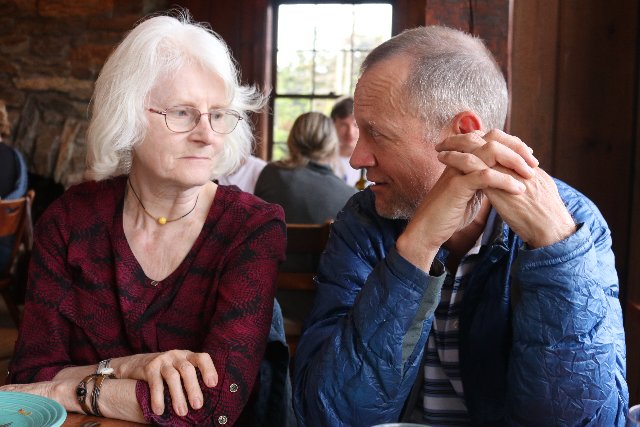 Astrid talked with a Georgia hiker celebrating his 90th day on the Trail. 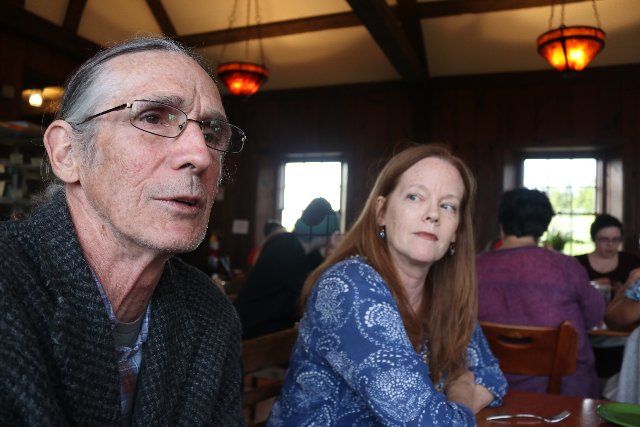 Catching up with an old friends Billy Russell and Sandy. 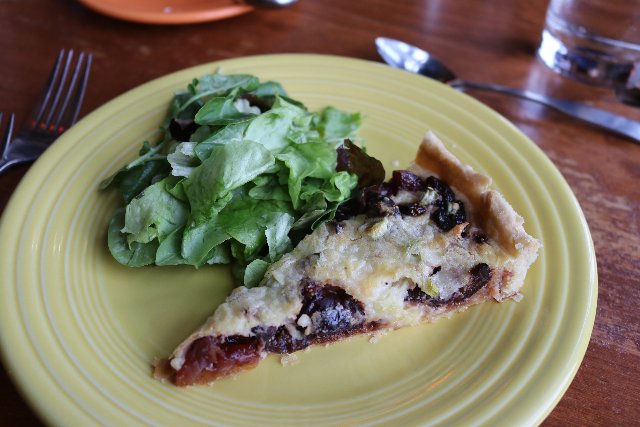 A first course of fig tarte and salad. 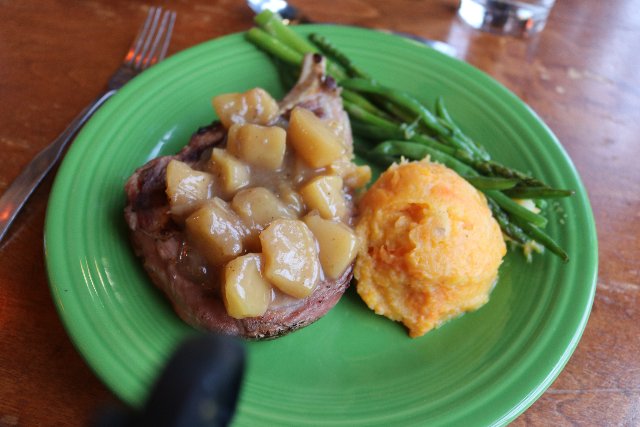 A main course of pork chop with apple.

It was a picture perfect Sunday afternoon when we took a long and winding drive to the 3,491 foot summit of Mt. Greylock.

Parking our car for a short walk to Bascom Lodge we encountered friends, Peter and Bob, also attending an event organized by Berkshire Playwright’s Lab.

We paused to admire the now renovated memorial and beacon. From vantage points there are spectacular views of distant mountains and lakes. There is a bronze relief of the terrain.

The Lodge and a ski trail were a WPA project in the 1930s. There are a number of shelters along the Appalachian Trail of which hikers proclaim this as rare and spectacular.

Long closed and in disrepair, the Lodge and its approaching road, were renovated and relaunched in 2009. On its porch there are free events. During high season three meals a day are served. There are bunk rooms as well as small private ones.

In front of the entrance to the Lodge we encountered Jake who was preparing a meal of ramen noodles and potatoes with a bit of spam. It was being cooked on a small propane fueled device. He explained that a high carb meal is necessary for some 30 miles a day of hiking.

It was something he has been building up to since starting the Trail in February. By his own admission the first couple of months of slogging through snow were rather miserable. He recalled frozen pants that could stand up on their own.

We asked if he planned to stay in the Lodge? After a quick meal he hoped to make Vermont by sundown.

Later during dinner we met a hiker staying over. Mostly he’s a mountain man but the father of two teenagers stated that this was day 90 on the Trail that started in Georgia.

Asked about the shelters, which can be about six miles apart in some states, he said that unless it’s raining he prefers his tent. “People bring food into the shelters so rodents are a problem” he explained.

There was a steady flow of visitors in and out of the Lodge as we anticipated the performance. Drinks, beer and wine, as well as snacks are available. Astrid offered me some of her cookie but, as we were staying for dinner, I didn’t want to spoil my appetite. Also, concerned about the sundown descent and narrow road, I refrained from alcohol.

On Sunday, September 2, Astrid and I will give a reading with my book launch at the Lodge. Part of our agenda was to scope out the programming and ambiance.

Bascomb Lodge proves to be a spectacular setting for an event. Particularly popular are jazz concerts including a mini festival in July.

The porch was well populated when Peter Dudek, the program director know for his Rasta style locks, got things started.

The mashup or slam was organized by playwright Anne Undeland. She was joined by Steve Otfinoski, and our critic/ writer colleague J. Peter Bergman.

Although the actors- Benjamin Luxon (former opera star), Chris Tucci (the waiter), Gail Ryan, and Olvier Wadsworth and Otfinoski- were reading from scripts it felt more like seat of the pants improv. Three segments were spliced into less than an hour.

There was a ten minute gap before the dining room was to open. Undeland filled that time by whipping out another script.

With no staging or rehearsal to speak of there was the fun and lively sense of work in progress. It was a very forgiving audience generously stocked with friends of the writers and performers. The spirit and gusto was totally over the top.

The adventure started with a hilarious "The Bard Unbound" by Otfinoski who played the Bard of Avon. He has met for dinner and a pint with a renowned actor performed in a magnificently sonorous manner by Luxon. The running gag is that the rude waiter, Tucci, is an aspiring actor who inserts titles and lines of Shakespeare’s plays into his commentary.

While working on a book, and covering every play from here to Timbuktu, Bergman described the creative energy and blur of writing “Her Report Card.” Full of daunting word play he conflated the humor and confusion of Abbott and Costello’s “Who’s on first” with the existential, vaudevillian  exchanges of Vladimir and Estragon in “Waiting for Godot.” It evoked Susan Sontag’s notion of “Against Interpretation” or “Stop Making Sense” by Talking Heads. OMG!

As they say on PBS the brief but spectacular “Virgin Air” entailed an elderly woman with locked knees trying to get into an Uber car driven by the writer Undeland. She portrayed a sarcastic, world weary woman with a thick Russian accent. The passenger (Gail Ryan) is off to meet a man she hasn’t seen or spoken to since high school. Although she is convinced that he loves her, she can’t remember, or is too modest even to utter the name of her airline. That equates to frustration and comic confusion.

We adjourned to the dining room which, even pre season, was sold out. Shown to two seats joining a large family party felt too odd. The hostess reseated us next to a window. There were found our 90-day-hiker. With wonderful serendipity we were soon joined by an old friend Billy Russell and his wife Sandy. They and a woman friend had come to see Undeland.

Over a prix fixe, three course meal, we caught up on adventures and mutual friends. For many years he built lofts for high end clients in New York. Now he would like to set up a studio to work with rare wood he has collected over the years.

I was in a bit of a tizzy to settle the bill and race to our car. It was about a half hour after sundown and I was anxious to catch the last daylight as we made our way down the mountain. It was dark when we turned onto the wrong road which was more like a cow path. Somehow we stumbled into the parking lot behind Heritage State Park.

With palpable relief we concluded a Night on Bald Mountain. As Otfinoski’s waiter would say “All’s well that ends well.”