At Portland Museum of Art 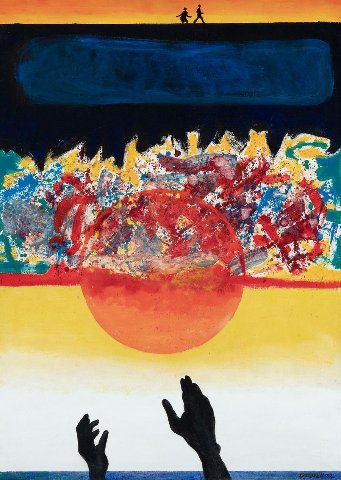 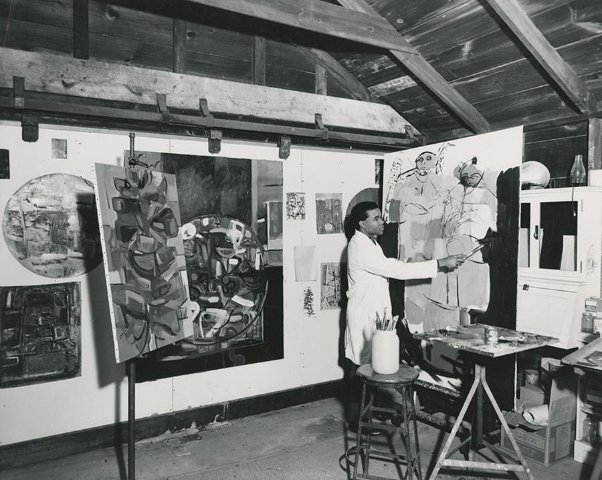 David Driskell painting in his studio, Washington, DC, circa 1965. Photograph by Ralph A. Mauldin.

Born in Eatonton, Georgia, and splitting his time between his home in Falmouth, Maine, and Hyattsville, Maryland, David Driskell (1931–2020) was a revered American artist whose work inspired generations of artists and audiences alike. Icons of Nature and History reveals the artist’s aesthetic inheritances from home, family, the South, and his formative education—at Howard University, Skowhegan School of Painting & Sculpture, and the Catholic University of America—as well as the influence of his sojourns to Europe, Africa, and South America.

Driskell's artistic evolution is marked by distinctive eras, experiences, and experiments with media, and steadfast in his paintings and collages is a commitment to a symbolic form that elevates the mind and the spirit above that which exists in the physical world: these are Driskell’s icons.

Spanning seven decades, Icons moves the center of critical art history to Driskell’s arenas: Washington, DC; Talladega, Alabama; Nashville, Tennessee; Hyattsville, Maryland; and Falmouth, Maine. Driskell's painting and printmaking practice is vibrant and versatile, combining his sharp observation of American landscapes and his interest in the imagery and aesthetic innovations of the African diaspora. Driskell’s?legacy in the history of American art is?unparalleled: through artistic practice, curatorial work, writing, and teaching, he?pushed audiences to consider the American story?inclusive of the art of Black people.?

Although his first love was painting,?his professional life was also largely devoted to?service?for others: he taught generations of artists and art historians; mentored?emerging artists and young faculty members, primarily at Historically Black Colleges and Universities (HBCUs);?researched and wrote extensively about the artistic achievements of Black?people throughout American history;?and?fostered the establishment of African and African-American?Studies programs?in American academia.?

The PMA is honored to organize this exhibition in partnership with the High Museum of Art, Atlanta, which brings together approximately 60 works together to present highlights of his career. Icons surveys seven decades of the artist’s painterly practice from the 1950s forward, and features works from both public and private collections, including rarely seen works from the artist’s own collection.

The resulting exhibition tells a rich and vibrant story of art that is intrinsically tied to Maine and uniquely American.

DAVID DRISKELL (1931-2020) graduated from Howard University and received an MFA from Catholic University in 1962. In 1953, he attended the Skowhegan School of Painting & Sculpture, which began for him a lifetime of connection to that organization as well as to the state of Maine. From 1955 through 1977, Driskell taught at Talladega College, Howard University, and Fisk University; from 1977 through 1997, Driskell taught at the University of Maryland, College Park, which is now the home of the David C. Driskell Center, a research institute that houses Driskell’s archive and serves as a study center for the history of African American art and art of the African diaspora.

Julie L. McGee is an art historian and curator. She co-curated the 2011 exhibition Creative Spirit: The Art of David C. Driskell for the David C. Driskell Center, University of Maryland, College Park. Her current research is focused on the American-Dutch artist Sam Middleton (1927-2015) and transnational art history. McGee is Associate Professor of Africana Studies and Art History and Director of the Interdisciplinary Humanities Research Center at the University of Delaware.