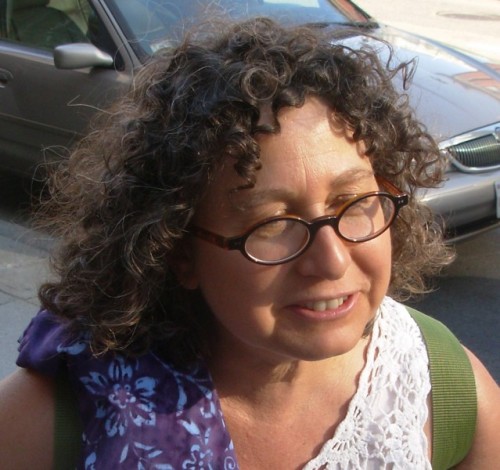 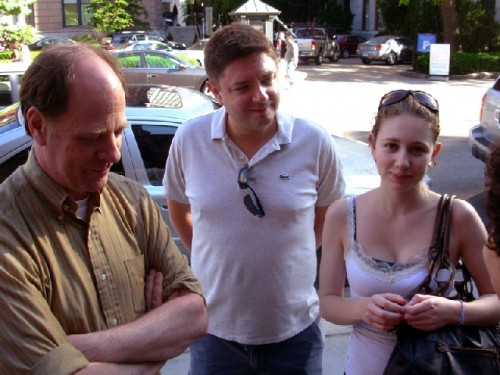 Son in law Michael, grandaughter, Maya, and her uncle Jamie. 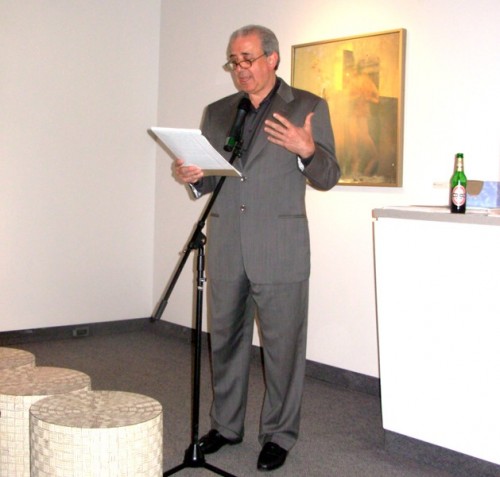 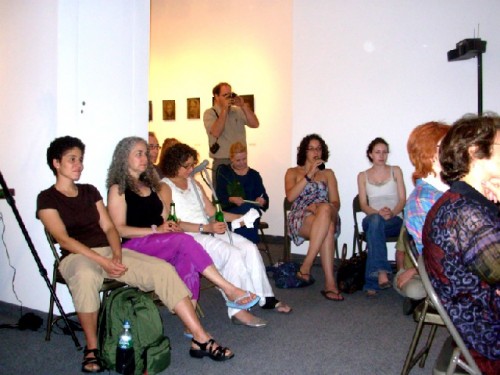 A gathering of family and friends. 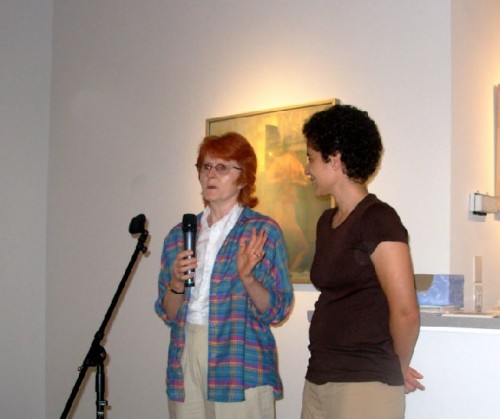 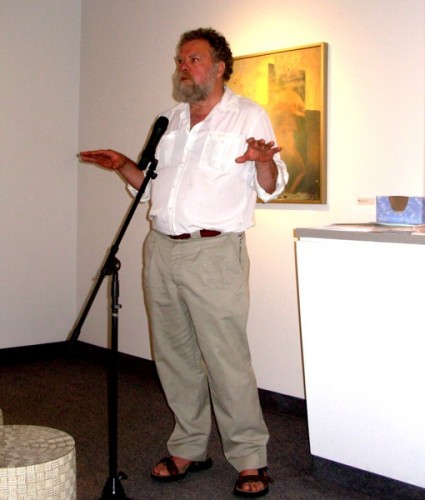 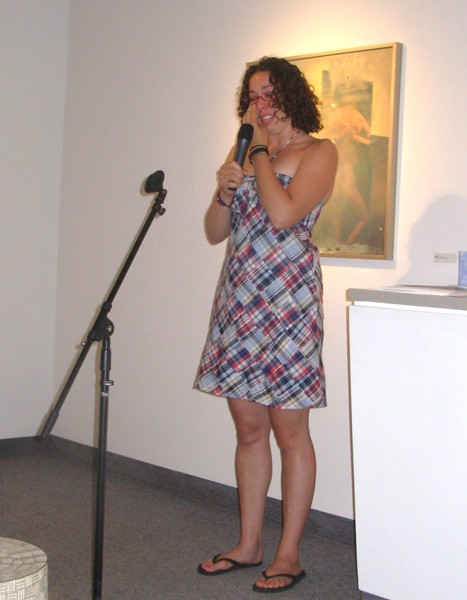 Grandaughter Rebecca conveyed how Nana told her she was beautiful. 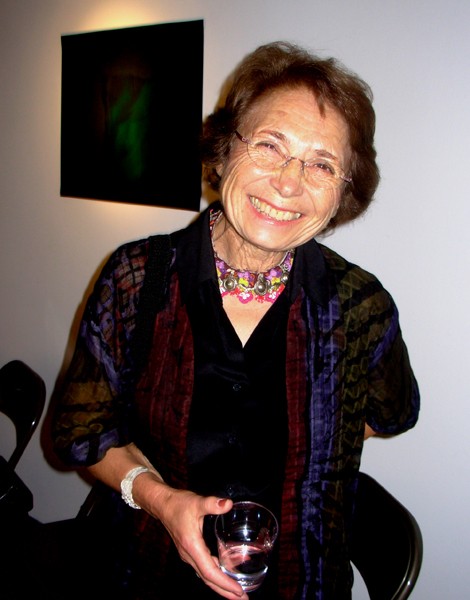 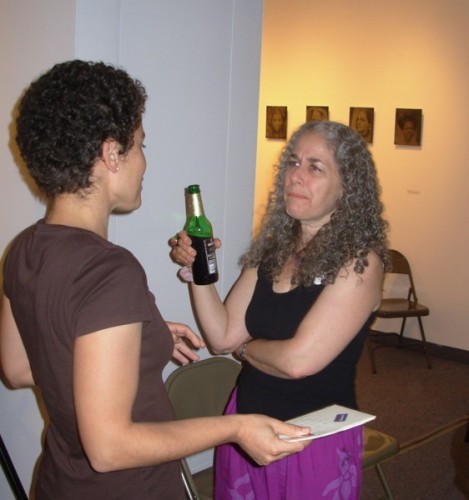 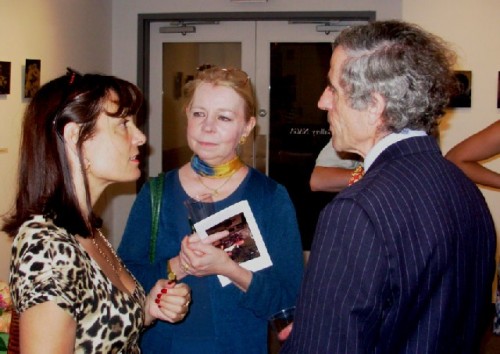 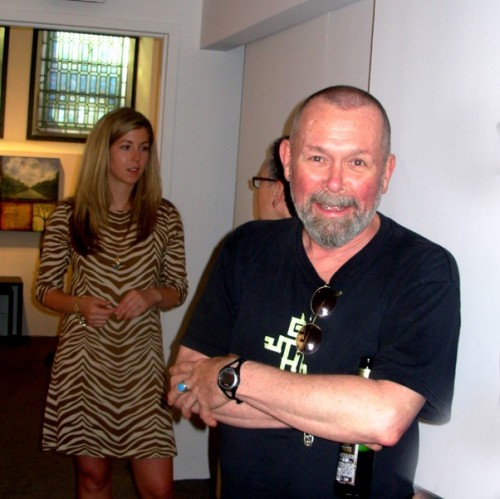 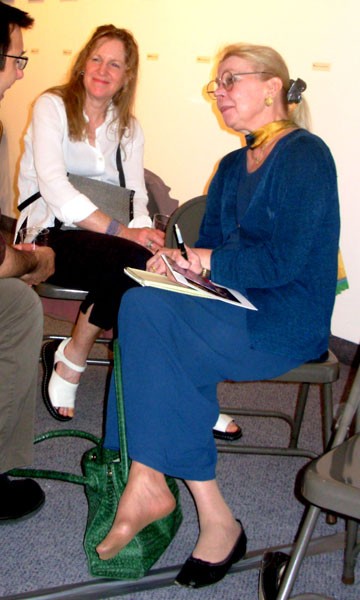 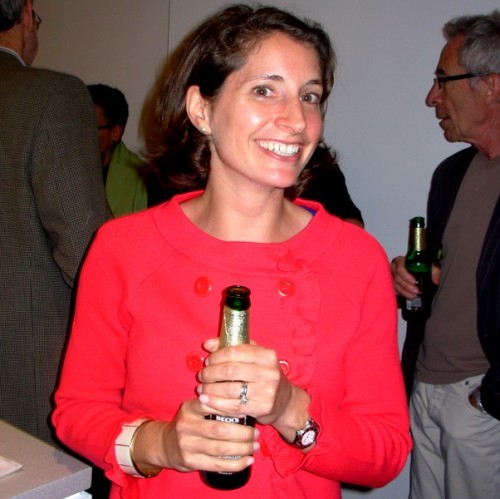 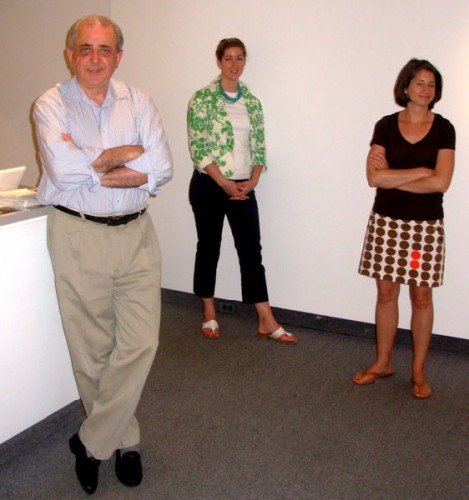 NAGA partners Dion and White, here with assistant director Suzanne Fraelick are commited to the legacy of Casdin-Silver.

When the holographic artist, Harriet Casdin-Silver, passed away on March 9, at the age of 83, there were already plans for two exhibitions combining new and older works. The first of these "Self Portraits" is currently on view at Gallery NAGA on Newbury Street in Boston through July 11. The exhibition features several pieces including a life size, double nude, front and back, self portrait with the left created in holograms, and the right, back view mimicking the frontal pose, assembled from collaged, digital prints. The monumental piece "70+1+2" was created in 1998. The announcement image for the show is her "80+1" from 2007. In this digital print the artist is posed nude in her grandmother's transparent, embroidered dress.

A committed feminist, the artist conflated the experimental medium of holography, particularly in later years, with an interest in the nude body. In the pioneering early days, given the limitations of the medium, the work focused on still life setups. As the technology advanced she frequently used herself as a model as well as family members and friends. Other than commissioned portraits and special projects she primarily depicted women. But she was hardly a Mary Cassatt presenting a refined and domestic homage to her gender.

Her images were often bold and transgressive. One of her best known works, a small scale, editioned,  piece "The Venus of Willendorf" (1991) presented a contemporary version of the primal, earth goddess which in its original sculptural form is arguably the first masterpiece of Western Art. Similarly, at a later time, while working in a holographic studio in Belgium, she recruited a corpulent hermaphrodite to pose for her. It became the sprawling, daunting, galvanic image "Renee" in my opinion a masterpiece of her oeuvre. The phenomenal, life size, collaged image, mounted on metal with magnets, has been acquired for the permanent collection of the De Cordova Museum and Sculpture park in Lincoln, Mass.

Some time ago I included "Renee" in an exhibition, my first, for the New England School of Art and Design "Off the Wall: What a Relief" when it was formerly located on Newbury Street. It was a two part exhibition with the other half a few doors away at the former Creiger Dane Gallery. The NAGA staff installed the complex work with its special lighting.

Ironically, at the time of the exhibition, NESAD was in the process of negotiating a merger with Suffolk University. At a very sensitive moment the "suits" from the university, known for its law school and conservative administration, were scheduled to meet with NESAD director, Bill Davis, to hash out the final details. One may well imagine the shock to those lawyers and administrators when, stepping into the first floor gallery of the school, they confronted Harriet's hermaphrodite who was seemingly tumbling out of the wall to greet them. Nude no less.

Somewhat diffidently Davis later conveyed to me, once the merger was consummated, that Harriet had "Almost queered the deal."

In the fifteen or so years that I knew Harriet it would not be the first or last time that she and the work would prove to be challenging and problematic. Last week, Gallery Naga hosted an evening in which family and friends were invited to share memories and anecdotes related to a complex and remarkable woman and artist. I told my "Renee" story and there were many other amusing moments.

Apparently, as one of her daughters recalled, having a feminist mom could present difficult confrontations. While parents often have conflicts with the daring and inappropriate outfits of their teenage daughters, in her case, it was often the other way around. When the family was about to depart for a social occasion Harriet emerged in a see through ensemble (in the spirit of the 60s she had "burned her bra") that was so risquÃ© that her husband Simon lay on the couch and refused to budge until she changed into something more acceptable. There was a "huge fight."

In an emotional moment her tall and striking granddaughter, Rebecca, put it differently. Harriet did some wonderful nude studies of Rebecca fairly recently when she was experimenting with non holographic, digital imagery. As a very large young woman Rebecca informed us how she was often self conscious, particularly as a teenager. "Nana would take my face in her hands and tell me I was beautiful. She told me to be proud of my body" she conveyed. Those images of Rebecca, like others of women, young and old, are empowering and confident. That is the sense in which they are feminist icons.

Frequently, dating back to the days when they were together at the Center for Advanced Visual Studies at MIT, Harriet asked my wife, Astrid Hiemer, to pose for her. It would have been a striking image. But Astrid declined and in hindsight now regrets that she did not take Harriet up on the offer.

I came to know Harriet and other CAVS fellows through Astrid. They were best friends. On this evening Astrid wore a shirt that evoked her. Her daughters recognized the shirt, now about 20 years old, and stated "You're wearing Mom's shirt." But Astrid had bought two and given one to her. The last time they got together Harriet wore the shirt as a tribute of their friendship. Harriet, Simon and their family for many years celebrated Christmas with Astrid and her daughter Olivia Smith.

I recall Harriet telling Astrid that, as we grow older, people stop noticing us. Sitting on the subway we become anonymous. It was typical of Harriet, through her work, to fight back. Her own nude body became a frequent motif and she also took on a complex project about aging. This series was presented at the Hynes Convention Center. It entailed a large circle of holographic portraits of elderly people. Above each individual there was a plastic dome under which the subject conveyed an oral history..

The current exhibition also presents two reclining images of the artist as a corpse. Now that she is indeed deceased these eerie holograms become all the more poignant and insightful. By making these "posthumous" images she was mocking her own inevitable mortality.

It wasn't enough to know Harriet, she insisted on recruiting you to her cause.  She could become frustrated when you resisted or asked questions. While often demanding she was also fiercely loyal and empowering to family and friends. Many younger women artists viewed her as a pioneer and role model. There was a scrappy contentious aspect of her persona that was conveyed by the tough, often confrontational, in your face, nature of the work.

Her strategy of expecting loyalty and support, however, was remarkably effective. Once Arthur Dion took on Harriet as an artist he was and remains fully committed. That passion is shared by Meg White who later joined the gallery and is now a partner. Dion has often stated that Casdin-Silver was the most important artist that NAGA has represented. That was an opinion largely shared by Nick Capasso who organized her 1998 retrospective for the De Cordova. For its 2007 exhibition "Collection Highlight: Harriet Casdin-Silver" the museum described her as "the world's most important holographic artist."

She was also appreciated and respected by her colleagues at MIT's  CAVS and peers in the field of art, science and technology. She is widely regarded as one of the most important of the artists who have explored the field of fine art holography. Her "Equivocal Forks" were prominently featured in "Centerbeam" a collaborative project for CAVS which was shown in Kassel, Germany during documenta 6, in 1977, and a year later, on the Mall in Washington, D. C.

When she was director of First Night Zeren Earls conveyed that she invited artists to propose installations for store windows. "Harriet chose Neiman Marcus" she related which brought an amused response from the audience. "I presented her case to the store manager who politely refused." Harriet insisted on a meeting and, after some two hours, the manager consented. This entailed removing all merchandise from the window and putting up a black curtain. "The installation which was intended as a few hours turned into two days," Earls reported. "Neiman Marcus was never the same."

In addition to feminism Casdin-Silver was also a contrarian. In his time at the microphone, the curator, and founder of Boston's Cyberarts Festival, George Fifield, conveyed a story, told to him by Capasso, in which Harriet defied all the rules presented to her by the scientists and technicians of an experimental holography laboratory. Quite specifically she was told to avoid using any objects with reflective surfaces. On the turntable used in the 3-D process she set up a circle of glass balls. The result was astonishing and sent the technicians scrambling to come up with explanations of just what she has accomplished.

To make his final point Fifield explained that what made the piece work is that Harriet had used "glass balls." Everyone got the point. It was the perfect metaphor.