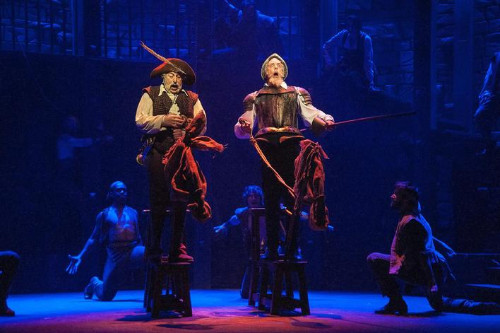 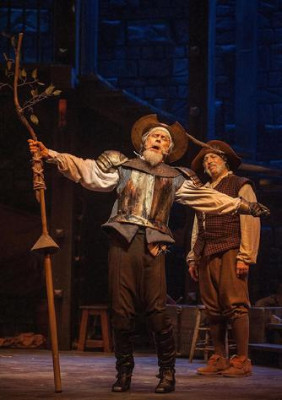 Don Quixite with his "golden helmet" as Panza looks on with amusement and compassion. 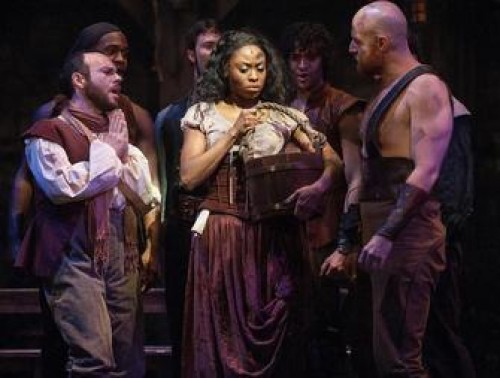 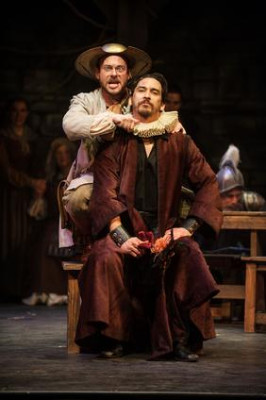 Barrington Stage launches its tenth season in Pittsfield with a stunning revival of the now fifty-year-old musical Man of La Mancha directed by Julianne Boyd. Based on the raucous audience response it is the first hit of what promises to be an outstanding summer of theatre in the Berkshires.

While it is early to crank up the hyperbole it is difficult to imagine that anyone will top Jeff McCarthy in the category of leading man in a musical. He has set the bar to an Olympics level with a stunning and career defining performance as the whacko, ersatz knight in tarnished armor Don Quixote.

McCarthy is readily familiar to a Berkshire audience for lead roles in prior Barrington productions including a speaking part in Arthur Miller’s All My Sons and the musicals Sweeney Todd and Follies. With considerable risk taking McCarthy played a transvestite in the edgy musical Southern Comfort. A handsome man McCarthy was a less than attractive woman.

Given his galvanic physical and theatrical stature director Boyd has built this fine production of a popular classic around the dream casting of McCarthy as the would-be Spanish nobleman.

Every ounce of emotional power is evoked in his show stopping rendering of an anthem of the 1960s “The Impossible Dream.” It is the highlight of a vigil of prayer and fasting as a common man anticipates being knighted. The character bucks the odds in a vision quest that is heart wrenchingly real to him while utterly mad and delusional.

It evokes the ad astra per aspera in all who aspire and dream.

While sung by a total gonzo character the riveting song evoked hope during the troubled but galvanic era that followed the death of John Kennedy with its tragically brief interval of Camelot.

November 22, 1963 blew the brains out of the hope of youthful leadership and a dynamic America embracing change. The official period of national morning ended on February 9, 1964 when the British Invasion of drugs, sex and rock ‘n’ roll was launched by the Beatles on the Ed Sullivan show.

That impossible dream of progress and change morphed into an era of Lyndon Johnson’s Vietnam War, dissent, urban battles for civil rights, gay rights, and feminism. The youth of America turned on, tuned in, and dropped out.

The musical's central character of author Miguel de Cervantes Saavedra (29 September 1547 – 22 April 1616) portraying his literary creation Don Quixote, in a double trial set in a Spanish dungeon, is so dominant that the musical risks being a one hit wonder.

Indeed few musicals are so utterly dependent on the performance of its leading man.

The musical with book by Dale Wasserman, music by Mitch Leigh, and lyrics by Joe Darion, is problematic and awkward.

Instead of telling the story of Don Quixote they pursued the device of a play within a play pushed to the limits. The author, Cervantes, as a prisoner impersonates his character while enduring a mock trial on the eve of a real one at the hands of the horrific Inquisition.

While we deplore the beheadings of ISIS and the repressions of the Taliban the Spanish Inquisition was no Sunday picnic or walk in a park. In 1492, the previously integrated Spain where Jews and Muslims were an integral part of the culture, dramatically changed. While there was Jewish blood in the family of the king, under Ferdinand and Isabella, non Christians were expelled. Those who remained were Conversos including ancestors of Cervantes. There were many tests of their Catholic faith including taking communion, while abandoning circumcision and kosher rules. The Inquisition was about maintaining the purity and faith of Spanish Christians. Only after the death of the dictator Franco was it legal to be a non Christian citizen of Spain. Many individuals and families reclaimed their Jewish and Muslim heritage.

Because of the poverty of his youth the biography of Cervantes is sketchy. He is said to have spent time and perhaps some formal study in Italy. He was particularly intrigued by the magnificent art and architecture. That would have been during the period of the transition of High Renaisssance style into the artificiality of Mannerism (for example The Tempest of Shakespeare) and then the realism of Carvaggio and the gruesome bloodbath of the Counter Reformation that signified the didactic and polemical Baroque style.

It is a melange of these epochal crosscurrents and paradigms that inform the quirky aspects of fantasy and reality in the Cervantes novel. It is so subtle and confounding that the task of transformation to a Broadway musical is like capturing lightning in a bottle. Man of La Mancha has more sturm und drang than tangible substance. We have only tantalizying glimpsies of the agonized depth of the seminal author.

In the trope of this production the setting and mood of the musical is particularly dark. Boyd has opted to embrace the grim aspect with a fabulous split level dungeon designed by James Kronzer. There is a starkly lit (Chris Lee) upper level of masonry walls in grisaille relief and rows of bars descending to a gate. The lower level is populated with a motley crew of skulduggerous naves and smarmy wenches.

There is a nice touch as guards clang their clubs along the bars. It creates an ominous sound signifying a prison and abandonment of hope by the condemned.

During freshman year in college I read Don Quixote twice. That was my habit the better to understand the required reading during two semesters of Humanities. It proved to be among the most enduring and enjoyable of the great books we read from The Iliad to The Divine Comedy and Canterbury Tales.

The masterpiece of Cervantes is regarded as the first great comic novel. Later I read the Modern Library edition with evocative ilustrations by Salvador Dali. Even as a young reader, for me, the book was less about required reading than an inspired and hilarious story of delusion and grandeur. There is such magnificent material to deal with including the compelling relationship between the mad commoner/ ersatz Don and his foil the deadpan sidekick Sancho Panza.

Like “Patience and shuffle the cards” Panza has all the best lines. "The proof is in the pudding" is also attributed to Cervantes. Panza is the prototype of the servant/ companion of the great man from the Lone Ranger and Tonto, to Batman and Robin, or Butch Cassidy and the Sundance Kid.

There is not enough synergy and wit in the dynamics of their interaction in this production. In the skillful tension of the novel Quixote would not exist without the reality checks and befuddlement of Panza. Too often McCarthy seems to be on his own while facing knightly challenges.

Confined to the setting of a dungeon there is disappointing use of such classic scenes like Don Quixote attacking windmills as giant foes. This incident occurs off stage with little dramatic impact. He emerges from that adventure smashed up with a lance that has been reduced to frazzled splinters. The misuse of that scene is emblematic of all that we miss had the musical been presented as a more straight forward rendering of the novel. Confined to a dungeon the proto absurdist/ surreal imagery of Cervantes never cuts loose from its shackles.

There is too little of the witty interplay between Don Quixote and his squire Sancho Panza (Tom Alan Robbins). Boyd has presented the musical as more of a tragedy than farce. There is more stark realism than ironic humor in her production.

Long after the demise of the Age of Chivalry Cervantes evoked its naïve idealism as a compelling metaphor. Rather than fighting imagined foes he had seen the reality of war against Islam. Although ill at the time he insisted on being on deck during the 1571 Battle of Lepanto. He was shot three times resulting in the paralysis of an arm. The defeat of the Islamic fleet spared Christian Europe from invasion. Loss in that all important conflict would have meant that today we would all pray to Mecca and live under Sharia law.

Cervantes was confined to a hospital for six months recovering from his wounds. He returned to active duty and was later captured by pirates. After five years in prison he was ransomed. He was again jailed when his job as a tax collector resulted in a banking scandal. This is used by the playwrights as the context for the prison setting of Man of La Mancha. In the musical he is facing charges of heresy for allegedly foreclosing on a bankrupt church.

For the Barrington production Boyd has aptly supported McCarthy with a terrific cast. As Aldonza/ Dulcinea, Felicia Boswell is compelling as the lowlife maiden to whom Don Quixote dedicates his noble deeds. Her dirt smeared face and soiled, tattered clothing are a bit overdone by costume designer Olivera Gajic. Boswell is a beautiful woman and why mess with that?

She played Diana Ross in Broadway’s hit Motown and Felica in the national tour of the Tony winning Memphis. Boswell makes the tart Aldonza's transformation into the fair maiden Dulcinea compellingly credible. She is chilling when singing “What Does He Want of Me.” We are horrified as she endures the rape scene vibrantly staged by fight director Ryan Winkles. Her deatbed scene and reprieve of  "Impossible Dream" was thrilling and sad.

While Jeff McCarthy utterly dominated the production there were many fine moments by supporting players. While not as funny as he should have been we believed in Robbins as Panza when he sang ‘I Really Like Him.” Jonathan Spivey should have had more laughs for "The Barber’s Song.” and “Golden Helment of Mambrino.” There is delicious wit in the Don's delusion that a banged up old shaving bowl is  radiant armor. Then pathos when he fixes "the helmet" on his head.

There were some technical problems. The actors wore microphones and as amplified their singing was at times distorted and difficult to follow. Given a relatively small theatre one questions the need for boosting their voices. When Quixote battles the mirrored knights there was a ground level white light that was so blinding that it distracted from the action on stage.

Kudos are deserved by a fine nine piece band under the musical directon of Darren R. Cohen. There was effective choreography by Greg Graham but this is a show more about singing than dancing.

Yet again we are in a troubled time of social unrest, endless war, violence and racism. Fifty years later that magnificent anthem "The Impossible Dream" continues to thrill and inspire.