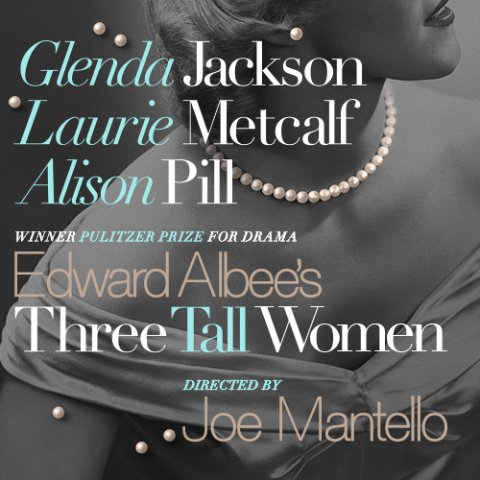 Funny? Edward Albee?  For many people, that isn’t the adjective that first comes to mind when thinking of playwright Edward Albee’s work. Yet the revival of his 1994 Pulitzer Prize winning play, Three Tall Women, has a great deal of humor in it.

It also raises interesting questions about how we become the people we are.

The play opens on a scene with the three characters: A – an elderly woman, B- a middle-aged woman and C- a young, professional woman. We aren’t sure of the relationship between the three. A is in a wheelchair and seems to have difficulty not only walking but also remembering things. She is obviously wealthy. B seems to be her paid care-giver; she is accustomed to A’s ways and demands. C is a young lawyer who was sent by the firm to work with A; it appears that she is not paying her bills. A also does not seem to trust anyone even though her mental faculties are declining.

In the second scene, we see A apparently in a hospital bed. In this production, the bed is behind a scrim facing away from the audience. In front of the scrim are the three women – but now it is clear that all of them are the same woman, just at different stages of her life. As such they talk and argue. How did C (the younger version of A) become B and A? What led B (in her middle fifties) become A? What was A’s life like?

As with any Albee play, one can spend hours dissecting the lines and the characters. Was A based on his mother, who from all reports was about as negative and destructive as any parent could be to a child. Yet he has said, that the audience tends to love her.  It is not necessarily the person he wanted to create, but the fine actresses who have played the part, have managed to infuse a humanity that perhaps his mother lacked.

In this case, it is the splendid Glenda Jackson who plays A. In the first part, she is irritable, stubborn and difficult, yet you sense that much of it is due to the normal fear of losing control that aging and illness brings.

In the second part, when she is elderly but heathy, Jackson creates a character that has lived her life her own way with few regrets. Others may not have approved, but she didn’t care. She doesn’t care if you like her, accept her or admire her.

As B, Laurie Metcalf offers us a woman in part one who is well aware of A’s idiosyncrasies and has learned how to deal with them. Even when being ordered about or reprimanded, she stays calm. In the second part, Metcalf doesn’t seem as focused, perhaps because I found that this character seemed less developed; we learn less about her.

Alison Pill as C gives us a woman who, in many ways, has her life before her. She is confident and capable, but unaware of the choices and compromises she will make. In her portrayal you see glimpses of the woman she will become.

Miriam Bleuther has created an effective set which is enhanced by the lighting by Paul Gallo.

The question remains if director Joe Mantello got the most from this play. Like many Albee plays, the merits of the work itself is hotly debated. Mantello doesn’t seem to convince the doubters that this is a major work; so in that way he failed to an extent.

Three Tall Women is at the Golden Theatre, 252 W. 45th St,   to June 24. Tickets are available through Telecharge.

Posted courtesy of Two On the Aisle.