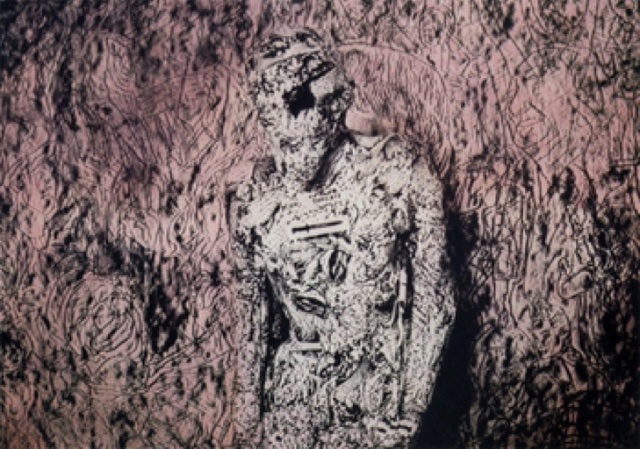 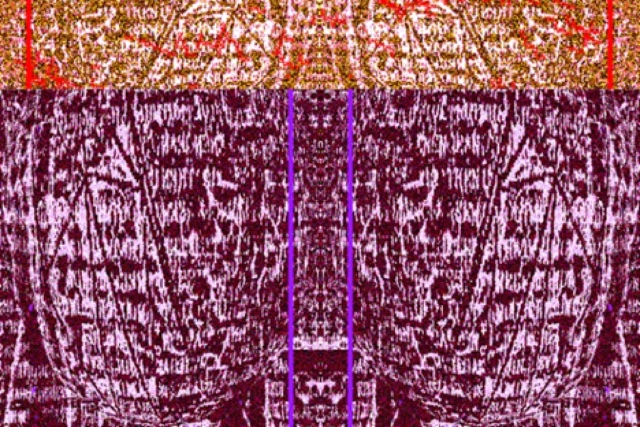 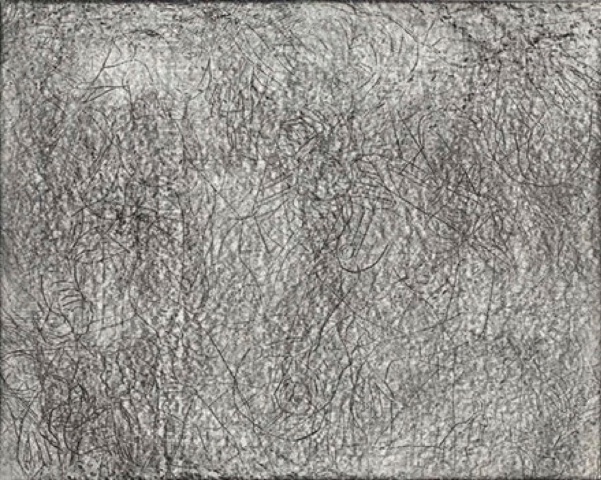 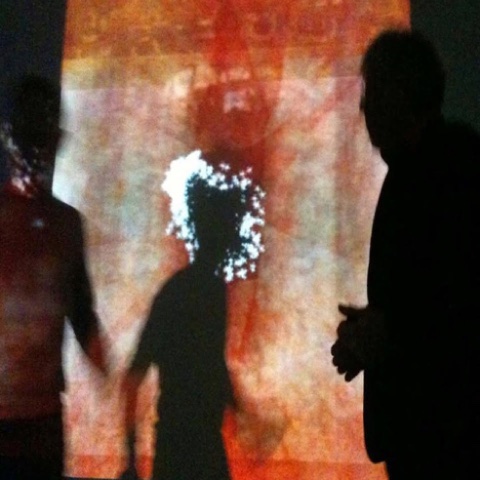 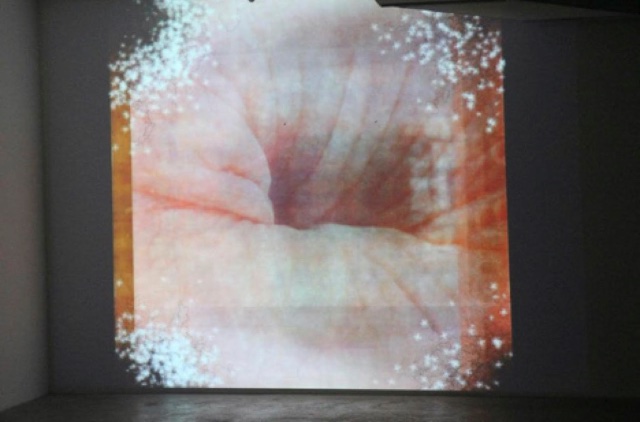 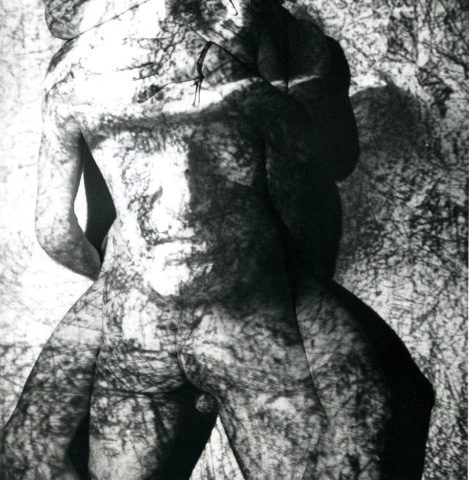 Long before we had heard of,  or even imagined, viruses like Covid-19, post-minimal painter, multi-media artist and art theoretician Joseph Nechvatal was generating them. Not the contagious types, but computer-robotic assisted ones.

Using a computer code as a simulation tool Nechvatal virtually introduces artificial viruses into a digitized reproduction of his earlier artwork , called the host. “The virus itself destroys the old work, replacing it with something new,  which is then extracted and painted on canvas, thus bringing the virtual into the real,” says Nechvatal.

What inspired his giant leap from being an artist who was making minimalistic paintings to an artist who paints with artificial life software and computer viruses?

“My interest in the media of computers led to the possibilities of computer-robotics as an alternative art tool, a new way to make conceptual paintings. They are built upon the legacy of Conceptual art, where the concept or idea involved in the work takes some precedence over traditional aesthetic and material concerns”

I asked Nechvatal why he called them paintings if, by his definition, they are computer-robotic assisted acrylics on canvas. “Because ,” he said, “they are one-of-a-kind painted canvases that have been airbrush spray painted through a computer-robotic driven mechanism.”

He arrived on the New York scene in the mid 1970s with degrees in fine art and philosophy from Southern Illinois University, Chicago. (He would later receive his PH.D. from what is now the Planetary Collegium at the U. of Plymouth, UK )

He moved to Tribecca in 1975 where he rented a storefront studio for sixty dollars a month.

New York in the 1970s was a gloriously liberating decade for artists, writers, musicians, poets and filmmakers. “I started going every night to the Mudd Club and Tier 3 to hear No Wave bands like Theoretical Girls, DNA, and James Chance and the Contortions, while painting and drawing during the day. Artistically, the scene was poised at the end of modernism. It felt like a moment of artistic climax in both painting, with Robert Ryman and Donald Judd at their diminishing zenith,  and  with Philip Glass in Minimal music.”

If modern art had reached an end point, where to go after that?

“So I dropped painting and started making small, gray, dense minimal graphite drawings with buried messages hidden inside. Drawings based on pictures in magazines and newspapers. This appropriation of media images was in the wind. I used appropriation as a starting point, not an end point.”

Artists best-known at that time for incorporating a wide range of media and mass communication into their artwork were Jenny Holzer and Barbara Kruger. Nechvatal was inspired by both of them.

“I was photo-mechanically blowing up these small drawings, making Xerox books, audio art, street posters. A post-punk sense of underground distribution that used media against itself was in the air.”

That’s when he made his giant leap from paper to cyberspace and began thinking about computer-robotics art.

Some of the first examples of interactive art were created as early as the 1920s. Marcel Duchamp’s Rotary Glass Plates, for instance.These were artworks  requiring the viewer to turn on a machine and stand a few feet away to see an optical illusion.

The use of interactive media in the arts really took off in the ‘70s, growing out  of video games.

The popularity of these games inspired artists to experiment by programming their own software. This first led many artists to collaborate with engineers.

New technologies like video and satellites were soon incorporated into theater, dance, music and art. Machines and artists collabortated.

Today digital tools are used in all forms of the visual arts.

When Nechvatal began working with digital media, “…there were no PCs. This was 1986. But the studio I was working with had access to a big computer painting machine that had been developed in Japan.” said Nechvatal.

Thus was born The Informed Man, his  first computer-assisted painting. The Informed Man is acrylic paint on an 82”x116”  canvas, where “degraded information patterns are printed via airbrush guns guided by computer-driven robotic arms onto a canvas support.”

The Informed Man is a human form that appears to be both blending in and emerging from swirling patterns. To me he looks like a cute mummy. It was exhibited at documenta 8, (Kassel, Germany) in 1987, and launched Nechvatal’s solo gallery career.

In 1991 Nechvatal was invited to become an artist-in-residence at the Louis Pasteur Atelier in Arbois, France. This is the hometown of the chemist, microbiologist and  pioneer of germ theory and vaccinations.  What better environment to experiment with computer viruses?

He was next artist-in-residence at the Saline Royale/Ledoux Foundation where he learned to meld computer viruses with computer animation. Here he created The Computer Virus Project .

The height of the AIDS crisis impacted Nechvatal  emotionally. “ I attribute the birth of the Computer Virus Project to my direct experience with, and exposure to, the deadly virus through my relationship to the tormenting AIDS death of Bebe Smith, Seton Smith’s twin. That, and the AIDS death I witnessed of my friend and neighbor, the Pyramid Club performer Tron von Hollywood. That period cracked open an emotional range in me between dread for one’s life and happy memories of a fading wild sexual freedom."

The initial goal of the Computer Virus Project was to produce physical paintings using algorithms to create a virtual ‘viral’ model. “The negative connotations of the HIV virus as a vector of disease is reflected in the principle of degradation of the image. The virus is also the basis of a creative process, producing newness in reference to the major influence of the virus on evolution in biological systems,” explains Nechvatal.

Another project to come out of the AIDS crisis is Nechvatal’s Viral Venture, an animated noise music symphony created in collaboration with composer Rhys Chatham.

Nechvatal’s work is always dropping us into a nebulous and crackling universe, albeit a visible, and this time a boldly colored one.

I soon realized the tiny images that sparkled on the edges of the moving colors were in the shape of 4-pointed stars.

What do the stars mean? Are they a Christian symbol like the star of Bethlehem? I decided not to ask.

First shown at the School of Visual Arts’ Beatrice Theater, Viral Venture, as Nechvatal told me, “captures  the cycles of birth, growth and death in real time. Artifical life using programming that tries to replicate some of the laws of nature. The virus lives off the color of the paintings so the color creates an echo system for the artificial life to thrive. As it runs out of food it diminishes.”

What about his relationship to color. “When I think of light and color now I think of the computer, of course, and it makes me think of virtuality, which is potentiality. It’s like anything’s possible when you’re in the realm of light and color. They’re just the building blocks for almost any future that you could imagine.”