Hit Musical Returns to the Berkshires 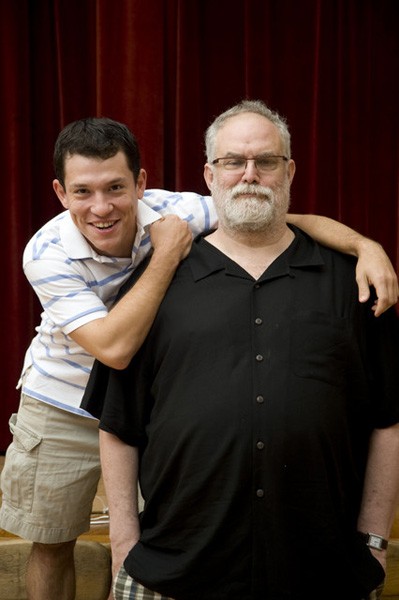 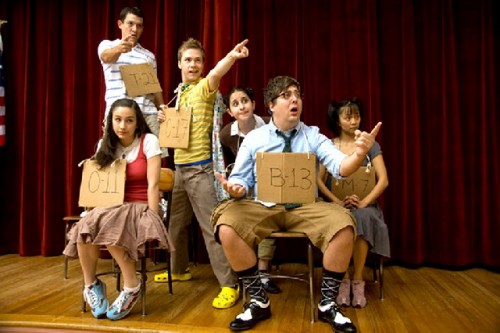 The kids are cool. 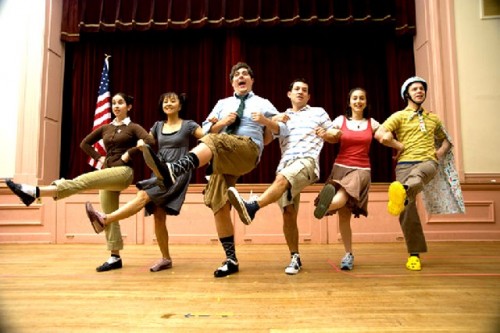 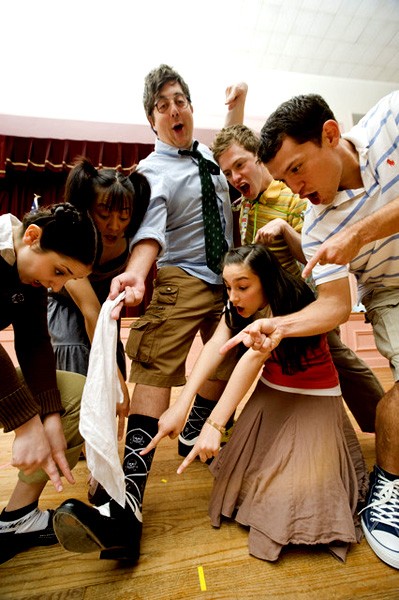 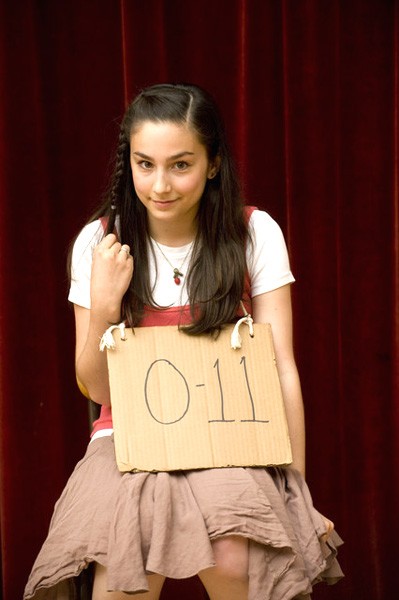 Molly Ephraim as Olive Ostrovovsky is destined for stardom. 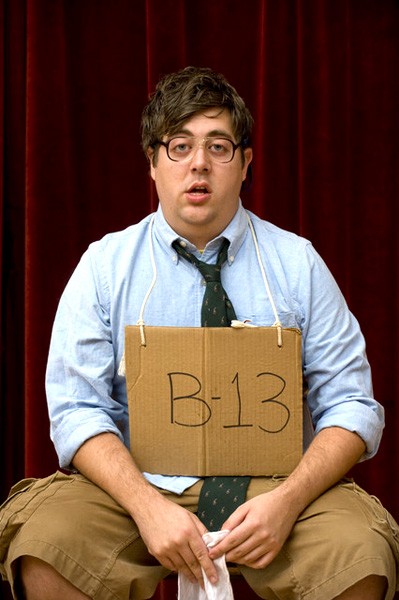 The super nerdy know it all William Barfee neatly performed by Eric Peterson. 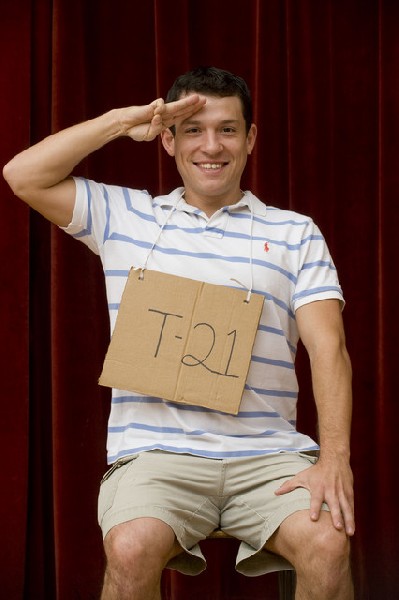 A wicked boner blows the consentration of contestant Chip Tolentino as hilariously acted by Miguel Cervantes. 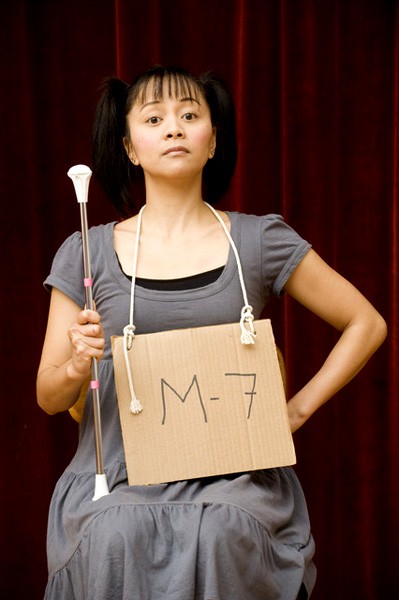 God is not necessarily on the side of Emy Baysic as Marcy Park. 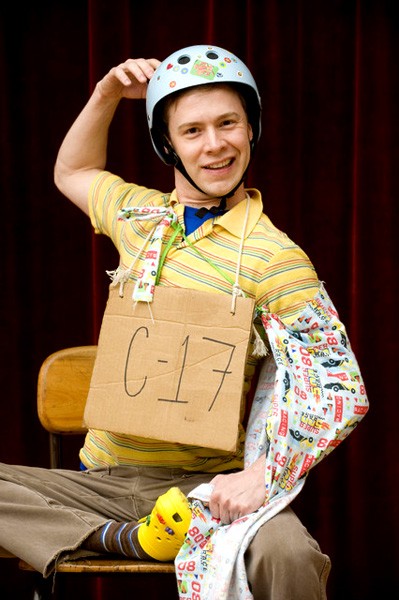 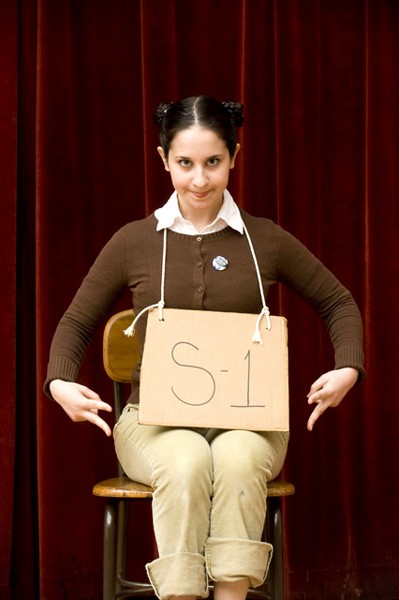 "May I have a definition?"

"May I hear it in a sentence?"

"Boffo. The return of the 25th Annual Putnam County Spelling Bee to the Barrington Stage where it originated is sure to be the Boffo production of the Berkshire season."

During this hilarious and totally awesome, like real entertaining and stuff, production at Barrington Stage in Pittsfield, I found myself trying to spell out all those tricky words and tongue twisters presented to an ensemble of adolescent contestants. Being stuck in my seat I was at something of a disadvantage. There was no possibility of using the "magic foot" technique of the nerdy William Barfee (Eric Peterson) or to whisper into my hands held in front of the mouth like the perky and oh so cute Olive Ostrovsky (Molly Ephraim).

More than likely I would have been stumped. The bell would ring and the bouncer Mitch Mahoney (Demond Green) would hand me a small box of apple juice and briefly embrace me before being escorted into the oblivion of having washed out of the spelling bee. In that regard being a so-so speller, thank heavens for the spell check on my computer, one identified with the four, randomly chosen, audience members who each evening volunteer to appear on stage and fumble through some tough words. They also take shots in ad lib one liners. There are lots of in jokes and often their friends and neighbors in the audience howled hysterically or cheered them on madly. But these walkons were just shills.

The concept of this smash Broadway hit (some 1000 performances and six Tony Award Nominations) is remarkably simple. In an effectively spare set by Beowulf Borritt, complete with rows of lockers and a suspended banner, the contestants reveal a range of emotions and neuroses in a bid to win the $200 prize and  chance to compete in the Nationals. One by one, they are eliminated but do not go gently into that good night. They kick, holler, scream, cry, and act total gonzo. To the absolute delight of a charmed and enchanted audience clammering for more. Even after some two hours, no intermission (tough on seniors by the way who really needed that potty break), the show left them hungry. It  is the kind of theatre you want to see over and over.

Particularly with this cast and production. The Pittsfield version of Spelling Bee, the first regional production although there have been tours in the U.S. and Australia, is absolutely top of the line. It moves to the North Shore Music Theatre, in Beverly Mass. from August 12-31. This will be a chance for the Boston audience to enjoy Spelling Bee.

The latest production of Spelling Bee will long be remembered for early glimpses of rising stars. My goodness. Like Molly Ephraim as Olive Ostrovsky, good grief, what a voice. Not just the range but also such marvelously nuanced inflection and interpretation. Those great pipes combined with just superb acting. She has the most poignant back story as the melancholy kid whose Mom is off in an Ashram and whose  neglectful Dad never arrives. Olive is a fragile child bobbing about on the turbulent tide of life. While the other contestants have family and friends rooting for them Olive is going it alone. In a tender exchange she even has a crush on the neurotic and needy William. Olive is the character who most deeply tugs on our heart strings. Such sweet music.

Even in a relatively minor role, Demond Green, proved to have a riveting delivery as he sustained notes beyond human limits. He returned as another character, the father of a contestant, in a completely different and equally remarkable rendition. Wow. Eric Peterson was just absolutely, deliciously terrific as the super nerdy William Barfee. There was a running gag about the pronunciation of his name. The comic version sounded like the act of vomiting. This know it all, super neurotic kid, insisted on correcting it to a more stylish French inflection. It was an example of the intricate word play and double entendres that spidered through the evening. Although a bit on the chunky side Peterson more than held his own in the often demanding choreography. He  has a real gift for comedy.

There were times when the format of the play proved a bit tedious. One learned the routine rather quickly so there was too often a sense of dÃ©jÃ  vu all over again. Just when things bogged down there were spectacular, over the top, ensemble pieces and times of utter mayhem with cast members running up and down the aisles.

The glue that held the show together was provided by the mistress of ceremonies and former spelling bee star, the successful local realtor, Rona Lisa Perretti skillfully played by Sally Wilfert. Again, she belted out songs with a chillingly stunning voice. Her partner was the conflicted Vice Principal Douglas Panch performed adequately by Michael Mastro. It seemed that his minor part didn't give him  much to work with.

All the kids were super cool. Miguel Cervantes brought the house down when Chip Tolentino washed out because he was distracted by a wicked woodie when it was his turn to spell. He returned for an over the top solo with slap stick, sight gags involving his aroused state. Oh kids and all those raging hormones.

Emy Basic was quite wonderful as the super achieving Asian teen, Marcy Park. She is fed up with the pressures to perform and has a gonzo exchange with God. She is informed by the Creator that whether she wins or looses will be quite alright and that He doesn't take much interest in such matters. Hannah Del Monte is fabulous as the politically correct, spunky gamin, Logainne Schwartzandgrubenierre. Clifton Guterman had many fine moments as the adorable and cuddly,  hippy dippy, Leaf Coneybear.

For this 14th season, and its second in a permanent home in Pittsfield, artistic director, Julianne Boyd, is counting on a hit to open the main stage. That strategy worked last year with a huge box office for an anniversary production of West Side Story. Frankly, I like Spelling Bee a lot better. West Side Story was terrific but a bit too much of a chestnut. While Spelling Bee is so fresh, contemporary, and utterly hilarious. Here we really get to see the full impact of the range of this smart, creative, and feisty company. The home grown product, Spelling Bee, put Barrington Stage on the national theatre map. We are truly blessed to have this award winning company in our own back yard. Let the games begin.