Kiss Me Kate at Barrington Stage 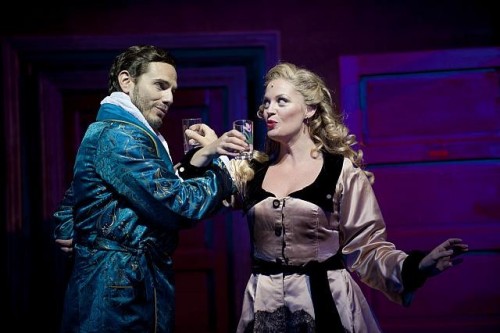 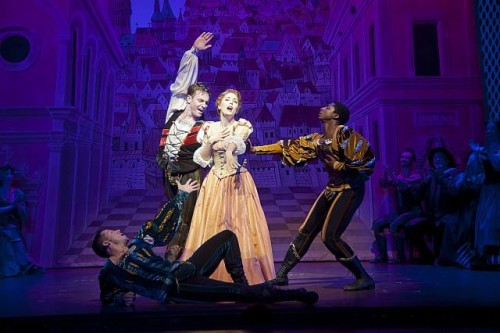 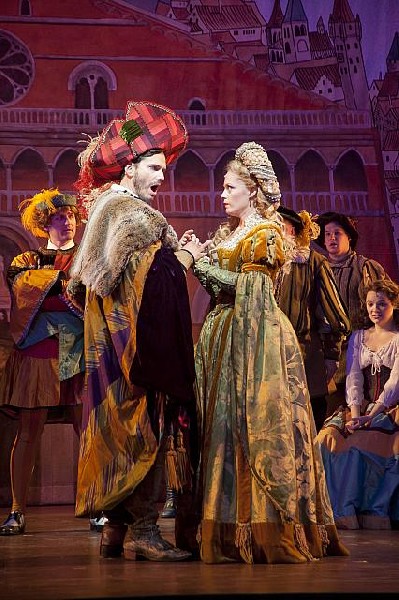 Kate and Petrucio at odds. 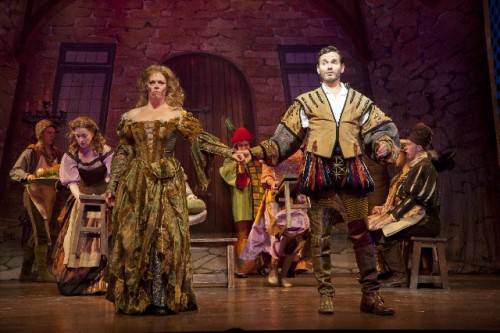 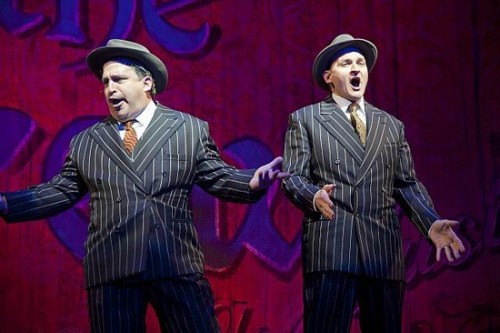 The Gangstahs Brush Up on Their Shakespeare.

Celebrating its 20th season Barrington Stage Company has gone all out with a smashing production of Cole Porter’s classic 1949 musical Kiss Me Kate.

This massive production with twenty actors on stage and a dozen musicians in the pit is a signifier of the growth and stability of a company that consistently brings first class theatre to the Berkshires.

Audiences will be thrilled to hear so many enduring Porter standards set to one of the first books, by Bella and Samuel Spewack, that following hard on the heels of Oklahoma, provided cohesive depth and more than a pastiche with songs.

This Kiss Me Kate has everything and then some.

If you have been disappointed by new musicals on Broadway this is proof positive that they don't make them like they used to.

Of course Porter played safe by adapting Shakespeare’s concept of a play within a play. It was a key aspect of Hamlet but here Kiss Me Kate appropriates aspects of The Taming of the Shrew.

The company produced, directed and starring Fred Graham (Paul Anthony Stewart) is staging The Taming of the Shrew on the road in Baltimore. In one of many reflections on a life in theatre the musical opens with Hattie (Nyla Watson) and the company putting a Gospel inflection on the apathetic “Another Op’nin, Another Show." It establishes the mishegos of life back stage and debunks the notion of theatrical glitter and glamour.

Fred’s leading lady and ex wife Lilli Vanessi/ Katherine (Elizabeth Stanley) is fading after a stint in Hollywood, hence playing Baltimore. She plans to give it all up by marrying the mysterious Harrison Howell (Fred Inkley). He is connected and calls her from the Oval Office briefly putting President Truman on the phone.

A woman of a certain age seeking status and security Lilli can’t pull her claws out of Fred who, while a megalomaniac, is drop dead handsome and great in the sack. He also sings magnificently.

Although Fred is easing into middle age he is distinguished, experienced and sexy to the scrumptious ingénue Lois Lane/ Bianca played delightfully by Mara Davi. Her every moment on stage is simply delicious. No wonder that Lilli is sick with shrewish rage and jealously. It is inevitable that on and off stage the nubile and galvanic Lois will knock Lilli out of the spotlight and throw her under the bus.

For now Lois is cute as a button and easy on the eyes but mega ditsy. She is no match for the life experience, cunning, and ruthless survival instinct of the older and wiser Lilli.

There are stage door Johnnies and for a few trinkets Lois sleeps around. Including General Howell who strongly resembles Douglas MacArthur. His best line is “I Shall Return.” He promises Lilli a glorious career as the future wife of the Vice President. He has been courted by Truman as a running mate but opts for Dewey. We have a knowing laugh about that.

Lois asks if he remembers her when the General shows up back stage to claim/ rescue Lilli. It seems they had a fling and she has an expensive bracelet in a vault to remember him. Slipping her his card he suggests that she keep in touch if she would like matching earrings.

The adorable but hapless Lois is smitten by a gambler and loser Bill Calhoun/Lucento (Tyler Haynes). He’s late for rehearsal and has signed an IOU for ten grand using the false signature of Fred Graham.

Two gangsters, wonderfully played by Carlos Lopez and Michael Dean Morgan, show up in Graham’s dressing room waving heaters and pressing to collect the debt. The only chance of that is if the show continues its run with Lilli who has threatened to quit.

By hook and with crooks the show more or less must go on.

It is amazing how much Barrington has been able to cram onto its intimate stage. In such a restricted space we wonder how the dancers manage to leap and cavort about. The male dancers in particularly are thrillingly athletic.

Some of this is performed on a precariously narrow ribbon that curves in front of the orchestra pit. It puts the actors within reach of the audience. There is an interval when actors are singing in the aisles, the men hoisting large wooden half barrels. In a Shrew scene several women step into them to crush grapes.

For a musical there is quite a bit of plot to follow. But that melts away when we are enthralled by all that wonderful music and iconic songs. Uniquely, then new for the era, the lyrics perfectly enhance complex relationships and ever evolving synergy of the convoluted play within a play.

Frustrated with her loser boyfriend Lois sings “Why Can’t You Behave.” It is a classic treatise on why good girls are smitten with bad boys. While sparring like cats and dogs Fred and Lilli wax nostalgic about when they were young and in love with the Viennese waltz “Wunderbar.”

In Shrew Petruchio drapes Kate over his lap and gives her a spanking. When Lilli discovers a note to Lois with flowers mistakenly assumed to be hers all hell breaks loose. She charges on stage tearing up the note and attacking Fred. It is a spectacular and well choreographed fight scene. Of course it’s dated and just not done anymore. But this reflects the misogynistic era of Porter and before that Shakespeare.

Porter, a closeted married man, trashes love with bitter and cynical songs. Katherine is filled with contempt proclaiming why she will never marry in “I Hate Men.” The suitors of Bianca are equally cynical in “Tom, Dick or Harry.” While it’s more about dowry than love for Petruchio in “I’ve Come to Wive It Wealthily in Padua.”

Some of the songs from Kiss Me Kate have become so iconic in the canon of jazz that is fascinating to hear them in the context of this musical. One of the most memorable of these “From This Moment On” is sung to Lilli by her fiancé General Howell. It is a promise of their future relationship and surprisingly tender for a soldier. It contains the fascinating reference to a later Porter masterpiece “Begin the Beguine.”

Just what did that mean? It was an obscure reference. A Beguine was originally a Christian lay woman of the 13th or 14th century living in a religious community without formal vows. In the creole of the Caribbean, especially in Martinique and Guadeloupe, the term came to mean "white woman." Beguine evolved as a style of slow, sensual music and dance for couples.

Another wonderful pull out is the hilarious duet by the gangsters who have become embedded into the ersatz production of Shrew. They bring the house down with “Brush Up Your Shakespeare.”

On every level this is a gorgeous production with crisp lighting by Jason Lyons and a clever, effective modular set by James Kronzer. The staging navigates the parallels of a stunning production of Shrew and action in grimy dressing rooms back stage.

Special credit is deserved by Amy Clark’s costumes which are spot on for every character and nuance from the Post War era to Elizabethan Shakespeare. Again it’s like designing for two shows simultaneously. In case we miss the point, for example, Clark has literally given the swashbuckling Petruchio a row of buckles for his knee high boots. She has gone all out dressing the women gorgeously as well as stuffing the cod pieces of the men.

For all of its enduring charm Porter’s show is a bit off kilter. The first act is too long. With the curtain held ten minutes for the typically rude, late arrival of the Berkshire Royalty we were in our seats for more than an hour and a half. Then the shorter second act flew by in a blur.

All in all its LOL for a fabulous revival of Kiss Me Kate.