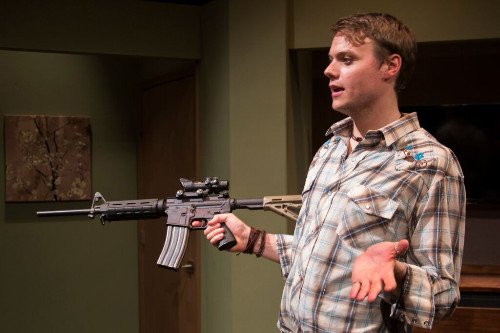 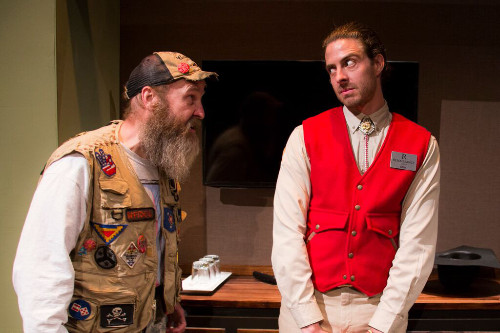 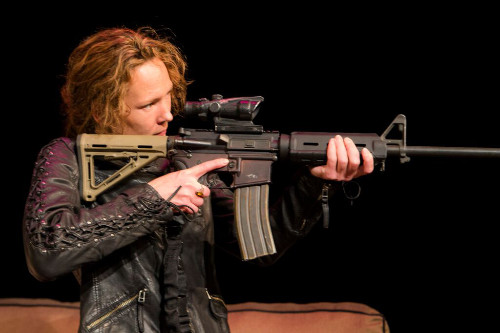 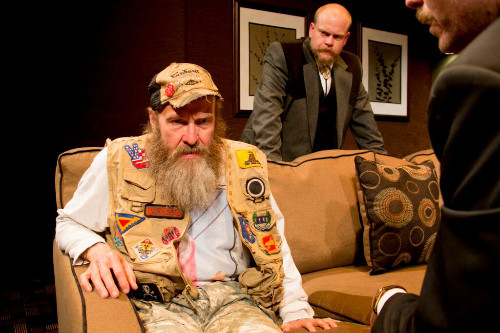 Every once in a while a small play – let’s say in this case a trifle, or is it truffle? – enscounced in an intimate, somewhat out of the way theatre, makes a big noise. New Country, presented by Fair Trade Productions in association with Rattlestick Playwrights Theater, and written by Mark Roberts, is one of these plays.

While the playwright’s bio – he also is one the leads in this play - overflows with TV, film, and stage appearances, all in various guises, it is his seven years as head writer and executive producer on Two and a Half Men that first hits one between the eyes.

Add to this, three seasons as an executive consultant on The Big Bang Theory, three seasons as creator-and occasional director on Mike and Molly, and you know that you are going to be bombarded with countless sit-com-like twists and turns and a copious amount of delicious raunch.

In a nice ploy, the play which takes place in an appropriately seedy hotel suite in Nashville, complete with a much used living room bar and a bath and bedroom offstage to the right – set by David Harwell – starts before the play actually starts, with a TV featuring film clips of cowboy gunslingers, killing each other, one after another.

Yes, we are being primed by the likes of Gary Cooper and Clint Eastwood, as we find out later, for some sort of action in which a gun plays a prominent part.

As the curtain goes up, so to speak, Chuck (Jared Culverhouse) and Paul (Malcolm Madera), the manager and handler of a Justin Spear (David Lind), a young, 25 year-old, narcissistic country music star, are heatedly discussing Justin’s upcoming wedding which is to take place in the morning.

Chuck, kind of short and dumpy himself, is bitching and moaning to Paul, about the fat chick bridesmaid that he has been assigned walk down the aisle with while Paul is paired with “a hot cousin with a tramp stamp and big jugs.”

My fat chick date is “…two teets shy of bein’ a bovine,’ Chuck complains. When Paul comments that she’s got a cute face, Chuck responds, “Yeah, restin’ on four chins like a pumpkin plopped on a stack of tires.”

Sprinkled throughout the play, most coming from the mouth of Justin’s grisly- bearded, black-toothed, 63 year old Uncle Jim (Mark Roberts) who arrives on the scene with a blow-up sex doll, are a flood of such quirky, down-home, southern accented, exchanges.

Such witticisms, coupled with numerous cleverly placed exits and entrances, a kind of slowed-down farce, keeps us on tender hooks, as we wait for the next shoe to drop.

Country star Justin’s first in-your-face appearance – he bursts into the hotel room wearing a rubber-faced Obama mask and carrying an automatic assault rifle – is one of many surprise introductions.

While we may jump out of our seats at his sudden appearance, Chuck, half scared to death that this is his end, empties his bowels. Cluing us in, he says, “I hope that they sell underpants in the hotel store."

Chuck and Paul are accessories. The more fully rounded characters, each with their own highly detailed back-story, belong to Justin’s favorite Uncle Jim, and Justin’s ex-girlfriend Sharon (Sarah Lemp).

Each character’s story is a tale straight out of a country western song detailing what went wrong or right in their life.

Some tales, especially those shared by Uncle Jim and Sharon – the two most sympathetic characters in the play – are heartfelt, even painful.

David Lind gives Justin just the right amount of self-centered mean. And when he temporally turns wus Lind handles that perfectly too.

Sarah’s Sharon, once a country singer in a band, and now an police officer on sabbatical, though outwardly hard nosed and aggressive, underneath, as she slowly reveals, is a vulnerable looking for love.

Sheffer’s Ollie, in a small but vital role, for most of the play dons a “light in the loafers” persona, that is, until he turns both ruthless and killer scary.

Stealing the show, both as written and acted, is Mark Robert’s Uncle Jim, currently a pig farmer from Alabama. His is the only character blessed, if you want o call it that, with so many interesting twists and turns in his former and current life.

There seems to be nothing that he hasn’t tried, and nobody that he didn’t bed, when he was young and gorgeous, with his “one-eyed anaconda,” as he tells us in the play’s longest and most moving monologue.

Uncle Jim is also, deceptively so, that is, unless you are a Freudian analyst, the brightest bulb in the bunch.

In one chillingly painful scene, forces his uncle, who by the way started Justin on the road to fame, to recount a number of his sexual conquests. While there is some humor to be had in the telling, especially in his coupling with a midget – “the only blow job I had with two people standing” – watching his uncles “forced” delivery was heartbreaking.

Except for bestiality, incest, and perhaps murder, there is no topic, from greed, blackmail, deceit, attempted suicide, diabetes, cancer, epileptic fits, closeted homosexuality, and entrapment that New Country doesn’t cover.

I could see this play again. Perhaps I will as the show has been extended to June 27.

This said, I wouldn’t be surprised if  New Country works itself into a sit-com. It certainly has all of the ingredients.

On the other hand, Nashville on TV may have run its course.

Here Roberts sharing the lead with David Lind turns in a highly nuance performance. What acting chops! Hopefully the Obie’s will take notice.