See Me, Feel Me, Touch Me 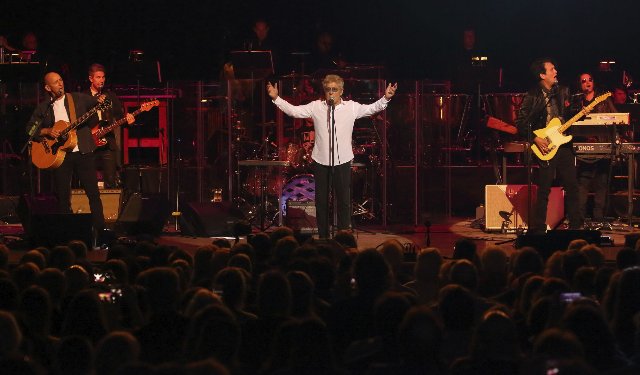 After nearly a half century lapse Tanglewood has doubled down on the vintage British rock group The Who.

Last night with the Pops it was Roger Daltrey’s turn. With remarkable stamina and a strong voice he performed the complete 75-minute Tommy. Townshend is taking a year off from touring. Daltrey was joined by Towhshend’s look and sound alike brother Simon. Other band members were, guitarist Frank Simes, bassist Jon Button and drummer Scott Devour.

Daltrey is now 74. So there is some irony in the youthful lyrics of the now superannuated Who song “Talkin' ‘Bout My Generation” with the daunting line “I hope I die before I get old.” In recent years Daltrey and Townshend have struggled with health issues and hearing loss.

“I have to keep singing,” he told a journalist. “At my age, if I stop singing for any length of time, my voice will go.” Using his fingers last night he depicted delicate vocal chords which have undergone surgery. But commented that it is a lack of hearing, and not his voice, that will bring an end to touring. Regarding hearing loss he suggested to the audience that it knows why.

Having experienced many ear-splitting Who performances affirms the cause of that infirmity. There are vivid memories of Daltrey performing bare chested with a fringe leather jacket. With flourish he twirled his mic while Townshend leaped when executing propeller attacks on a brutalized guitar. Those instruments which were smashed at the end of performances, like rockers themselves, were never intended to age gracefully.

Indeed, time does make cowards of us all.

That instrument destruction ritual, as I recall, was copped from guitarist Jeff Beck. The gonzo Keith Moon added to the mayhem by kicking over his drum kit. Having obliterated their instruments there was a dramatic finality to a Who performance.

Moon died at 32 in 1978. Bass player, John Entwhistle, was dead at 57 in 2002. With new members the Who continued to tour. Daltrey later embarked on a solo career and Townsend has been involved in numerous collaborations and projects.

Not that long ago Daltrey would have been glad to join his mates. Fighting viral meningitis in 2016 he stated “If death would have come, I would have welcomed it...“I’m OK now, but it was touch and go there for a while…“It made me realize how lucky I’ve been in my life. And what an amazing life it has been.”

At Tanglewood there was no evidence of infirmity. Dressed in a loose white shirt and black pants Daltrey appeared fresh and vibrant. The once flowing locks are now more conservative and age specific. No longer a rock hunk and boy toy he is fit and attractive, some might say stunning, for a man in his 70s. Some guys have all the luck.

At times he appeared a bit unsteady. Now and then, he twirled the mic, gathering an outburst of applause from the sold out Shed resonating out on the packed lawn. There was more effort than I recall from vintage Who performances. It seemed that he was getting tangled up in blue.

In addition to the Tommy tour he is out in support of a CD, the first in some time, As Long As I Have You. Strapping on a guitar, one of three encores was a song he wrote for that album “Always Heading Home.” The others were "Who Are You" and "Baba O'Riley." Unfettered from the Pops it was the too brief segment of the evening that felt like an actual Who concert. It was also the best received part of the performance as the geriatric audience finally got off its ass and rocked.

While Tommy was released in 1969 he told us that they first started writing tunes for it in 1968. As far as he is concerned this is a 50th anniversary tour.

Initially, it was hard to distinguish the lyrics as the BSO crew is not adept at sound mix for rock operas. The drummer was muffled in a translucent box. Surely Moon would never have gone along with that bollocks. Now and then it helped to recognize an iconic song. For the most part the audience remained seated as though it was a friggin BSO concert. No grannies were spotted rushing the stage. It was mostly a sedate or sedated evening. By that I don’t mean an audience zonked out on ludes.

The evening started with “Overture.” The ten-minute "Underture" has long been emitted from live performances. Plaintively Tommy is born with “It’s a Boy” back in “1921.” Gradually we learn of the meteoric rise of the deaf, dumb and blind kid who sure plays a mean pinball. There are story telling passages bracketing iconic hits. We were roused by “The Acid Queen.” It evoked recalling seeing Tommy live on Sunshine from a front row seat. It was wiggy man as Townshend leaped above my head.

Like skipping a rock over a mirrored pond there were flips for “Go to the Mirror” the plaintive “Tommy Can you Hear Me?” The anthem of my generation now lost in a fog of delusion “I’m Free.” In 2018 one wonders were we? At least then it seemed we were. Perhaps that’s what was meant in “We’re Not Going to Take It.” How does that resonate in the age of Trump when every day we seem to loose a bit more or our freedom and national sanity? Yet again it was a time to remember, come together, and embrace humanity with “See Me, Feel Me.”

Decades on Tommy endures because it has so many lessons. They thrill and inform us with for ever more important reasons.

Yet again, last night, Tommy reminded me of how rock ‘n’ roll saved my life. Sadly, it wasn’t enough for Anthony Bourdain and all the loved ones of my generation who aren’t around for the anniversary celebrations.