On the Town Boffo at Barrington 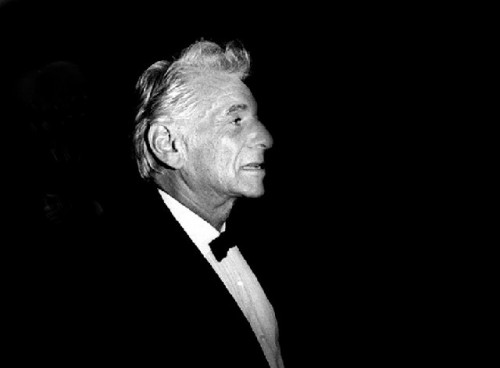 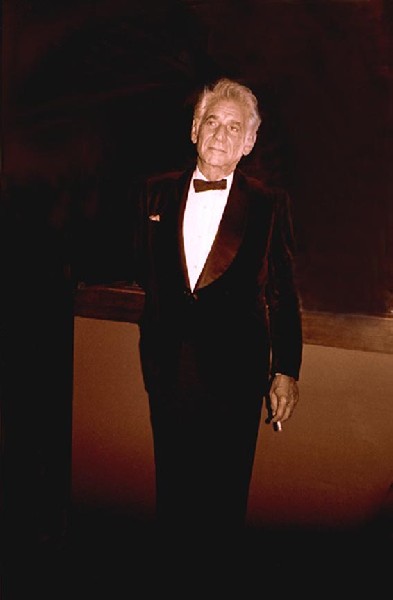 Bernstein was 26 when On the Town was produced on Broadway. 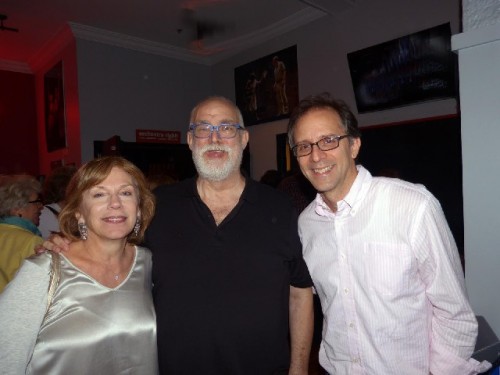 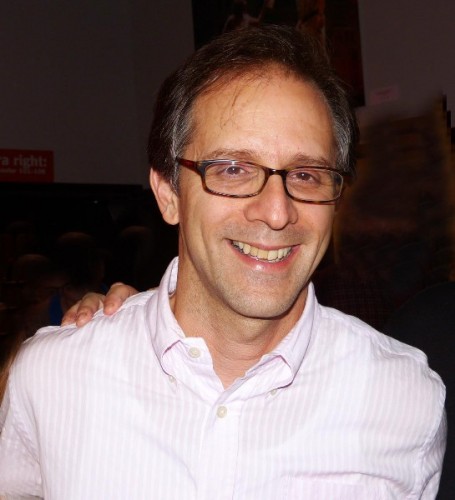 Rando is a Tony winning director. 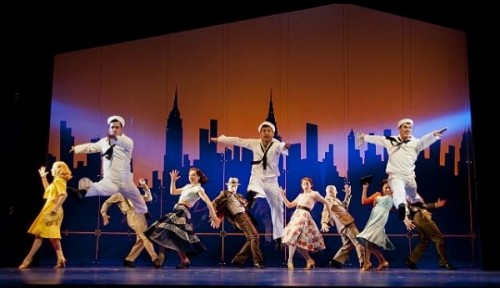 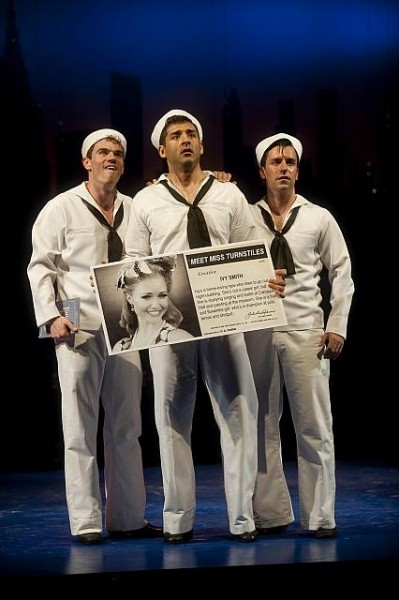 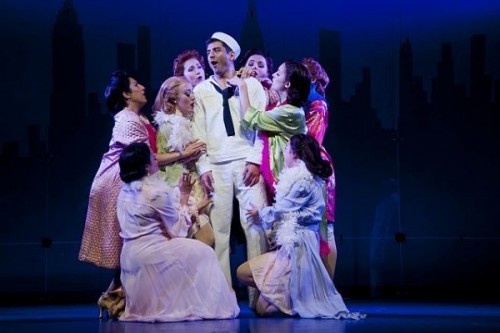 The dames are hot for a stud in a uniform. 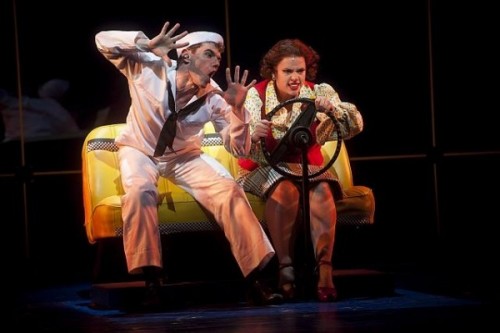 Getting taken for a ride. 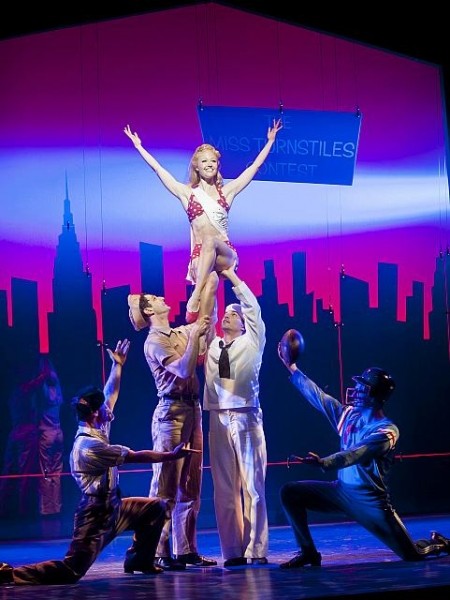 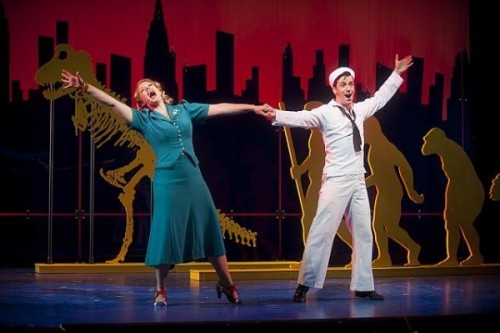 Its a one night stand for Elizabeth Stanley & Clyde Alves. 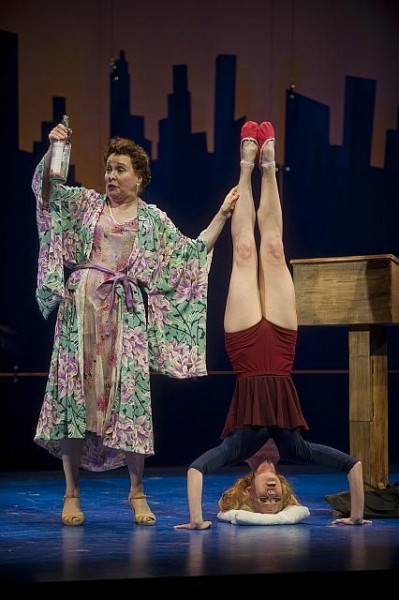 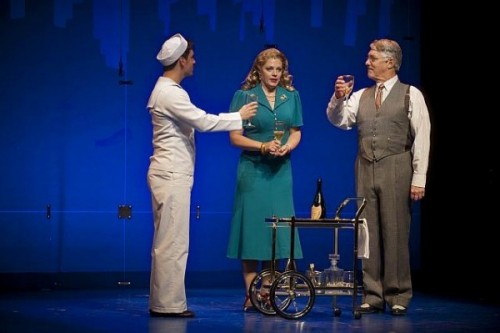 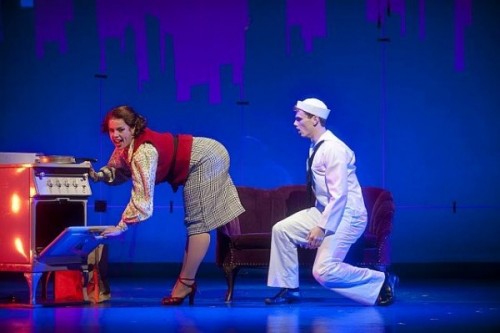 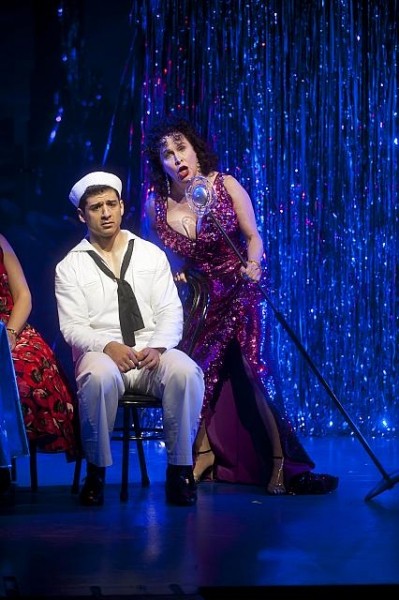 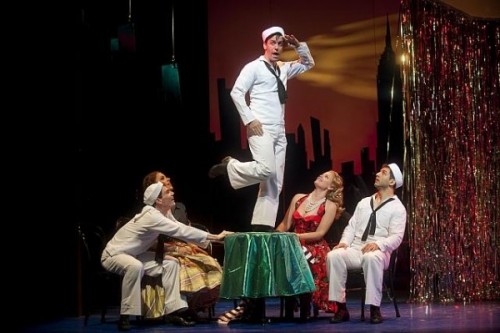 Dancing on tables in nightclubs. 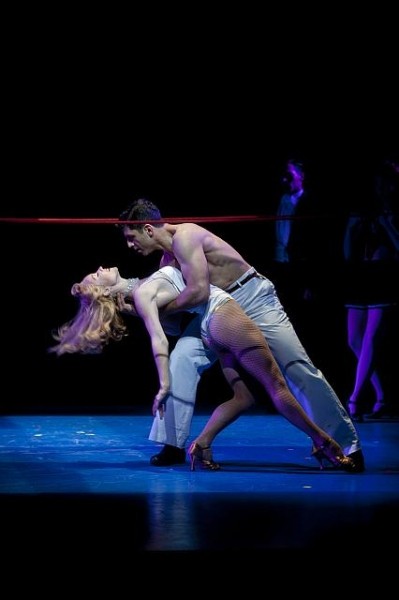 Gabey and Ivy finally hook up. 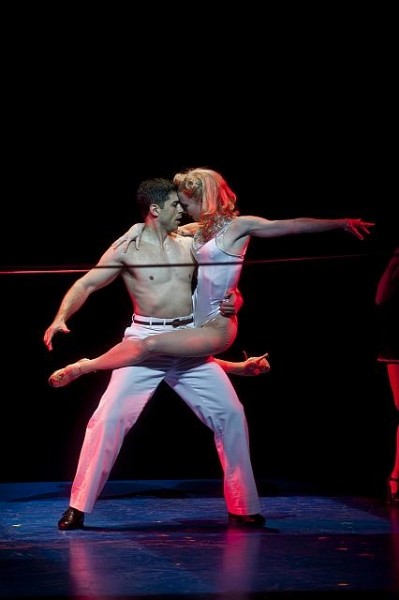 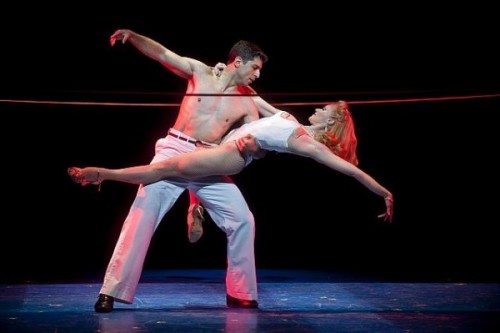 The stunning highlight of the evening. 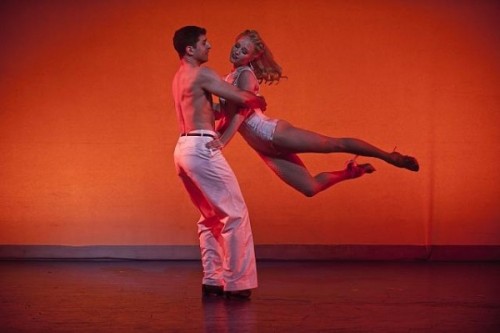 Swept off her feet. 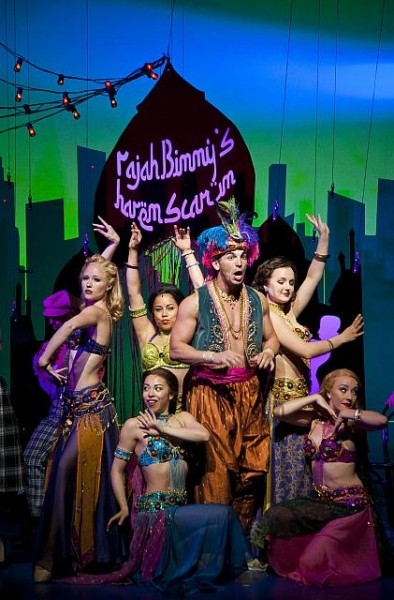 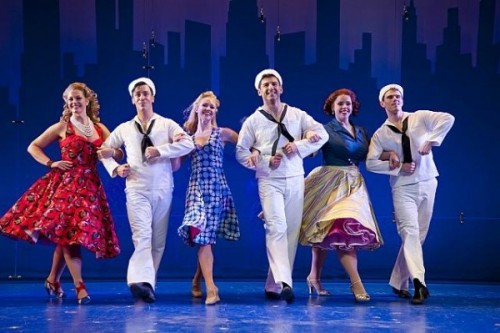 One last spin before boarding ship.

Under artistic director, Julianne Boyd, Barrington Stage Company is renowned for its musicals.

None better than an all out, full tilt boogie production of Leonard Bernstein’s rarely produced On the Town.

Directed by Tony winner, John Rando, and Emmy winning choreographer, Jushua Bergasse, on or off Broadway, here in the Berkshires, musical theatre doesn't get better than this.

Do we sound a tad enthusiastic? Wow. Bet on it. Youzah!

In 1944 Jerome Robbins set the ballet Fancy Free to music by Bernstein. He suggested that it might be reworked as a musical. It opened that year on Broadway then was hacked as a movie. The MGM film opened on December 8, 1949. It starred Gene Kelly as Gabey (who also co-directed with Stanley Donen), with Frank Sinatra as Chip, and Jules Munshin as Ozzie, as well as Ann Miller (Claire), Vera-Ellen (Ivy) and Betty Garrett (Hildy). The film dispensed with many of the Bernstein songs, other than "New York, New York," and replaced them with new songs by Roger Edens.

With America then at war the musical focuses on three Gobs- Clyde Alves (Ozzie),  Jay Armstrong Johnson (Chip/ John Offenblock), Tony Yazbeck (Gabey)- on leave for 24 hours in New York City. There is not a hint of combat in this escapist confection that provided audiences with much needed comic relief.

Yesterday, during the opening of the musical, it was bookened with Standing O’s. The first, rather surprisingly, with Darren R. Cohen conducting the superb ten piece pit band in the "National Anthem" with the audience singing along.

That broke into the first of a remarkable 19 scenes in two acts set in the Brooklyn Navy Yard. It’s dawn with a chorus of workers singing “I Feel Like I’m Not Out of Bed Yet.”

With the arrival of the trio of sailors they launch into an over the top production number of the most memorable song in the show “New York, New York.” Arguably, it is the only iconic song from Bernstein’s first musical. This is after all juvenilia. Bernstein was then just 26 before he hit his stride.

With limited shore leave one wants to see the sights while another is looking for dames.

During a well staged, compact subway ride Gabey become fascinated by an ad for Miss Turnstiles with clues for how she might be identified and tracked down. Reluctantly his buddies agree to help and spread out to find her. This results in their own comical romantic adventures.

Poster in hand Gabey discovers Ivy Smith (Deanna Doyle) in a Carnegie Hall studio taking singing lessons from a lush, Madame Maude P. Dilly (Nancy Opel). There is an awkaward, gosh, gee, shucks first encounter with Gabey seeing the absurdity of his quest. But, wait a minute. She is intrigued and agrees to a date later that evening in Times Square.

Overhearing, however, Madame Tilly, who is owed money, won't have it. She insists that Ivy show up for her Coney Island gig as a Hoochie Coochie in a dive. There, here's the twist, Madame Dilly, delivers soused, three hanky songs that turn off the sailors and their dates. Now falling down drunk she executes an exit milked for laughs that has her smashed and crashing into walls.

Perhaps the lack of hits is a reason why the show is rarely produced. For years there were few if any productions. This season there are two in Massachusetts with one in Boston, a smash for Lyric Stage, and now this second in the Berkshires.

One of these productions must be tweaking interest from Broadway producers. Don’t be surprised to see On the Town pop up more often in regional theatres.

It’s an expensive show, however, and Barrington busted the bank to stage a spectacular production with an enormous cast of thirty plus, that full pit band, as well as so many spot on 1940s costumes by Jennifer Caprio. The production values on every level were top of the line. There is an efficient, workable and uncluttered set by Beowulf Boritt, augmented by projections and lighting design by Jason Lyons.

Perhaps an impediment to productions have been dated aspects of the script and the challenge of reworking the original choreography of Jerome Robbins. Rando has made judicious cuts so the jokes and topographical references run clean.

For sailors taking in the sights, over seven decades, New York has changed. So how to rework their enthusiastic tourism which would be very different today?

Based on the Robbins original, this musical is mostly focused on dance. Barrington has a priceless asset in artistic associate choreographer Joshua Bergasse. Previously for Barrington he choreographed Guys and Dolls, Carousel, World Goes Round, and that other Bernstein musical, West Side Story, in 2007. Perhaps you were a fan of the TV show Smash which has been cancelled after two season. He won an Emmy for the show in 2012. Who will ever forget his Bollywood fantasy which was the most hilarious dance ever seen on TV.

While evoking the look and style of the 1940s Bergasse provides fresh, spectacular dance that updates but is also a tribute to the Robbins original. Not only is there wonderfully energetic ensemble work but also the stunningly poetic pas de deux of Gabey finally hooking up with the woman of his dream, Miss Subways is performed with consummate style by Doyle. Tony Yazbeck, who partners her and also sings, is extraordinarily multi talented and up to the task of showcasing her elegance and grace.

The production is fortunate to have three leading men who are equally superb as singers and dancers. They are also wonderfully expressive actors. The skirts they chase are fabulous as well. The full figured Alysha Umphress (Hildy) has more sharp curves than a drive around the Amalfi coast. She is also a comic genius who earned many of the loudest laughs in an evening that was full of stunts, pratfalls, surprises and gags. Elizabeth Stanley brought out the best in the philandering Claire De Loone. While engaged she just can’t resist a hot stud in a uniform.

In a cameo as her fiancé Michael Rupert makes the most of a role as the cuckolded Judge Pitkin W. Bridgework. He keeps showing up where he is told by Claire to pick up the check as she and the sailors move on to the next club. As an older man with a younger, pretty woman he sings "I Understand"  with compelling resonance until finally he doesn't.

A graduate of Boston Latin School and Harvard, as well as a founding faculty member at Brandeis University, Bernstein was steeped in the classics. Not surprisingly he conforms to Artistotle’s paradigm that the action on stage must be complete in a single day. In his other later works he adapted Shakespeare for West Side Story and Voltaire for Candide.

To be honest, On the Town, while lush and melodic is not his best work for theatre. The songs with book and lyrics by Betty Comden and Adolph Green serve the plot well. Many are superb- “Gabey’s Comin’” the light and seductive vehicle “Come Up to My Place”  “I Can Cook Too” and “I Understand.” But, other than “New York New York” none became iconic cabaret songs. That would evolve later for Bernstein.

Perhaps, like the inspiring ballet Fancy Free, Bernstein's music works best here as a vehicle for dance. That’s what we come away with far more than exiting the theatre whistling catchy tunes. How does one recall that most ephemeral of experiences and exquisite ballet. It’s just beyond words.

Which is why this show left us orgasmic and breathless.