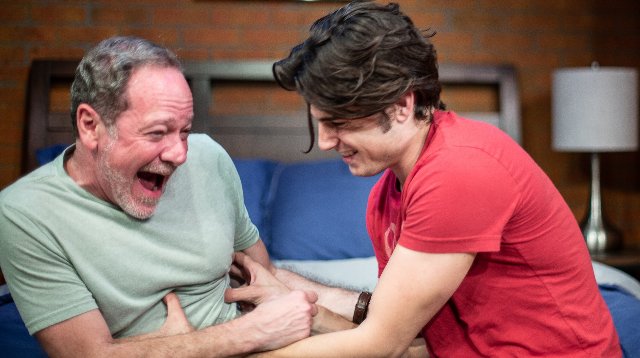 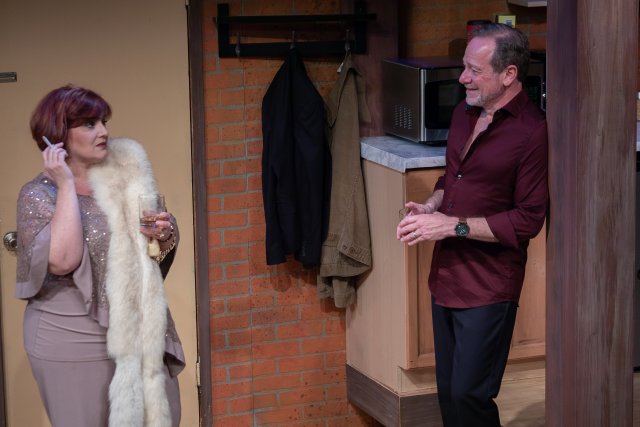 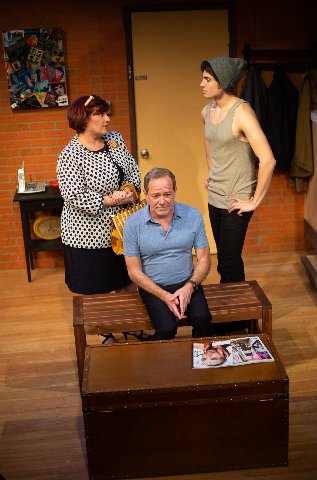 You don’t have to be gay to find resonance in Mr. Parker, a funny, touching play receiving its world premiere at Island City Stage in an all-around strong production.

Mr. Renaissance Man has penned and stars in the piece.

Surely, all of us can relate to the themes and ideas. They include loss and the grieving process, disagreements between adult siblings, defining legacy, dealing with uncertainty as well as letting go of the past and stepping into the unknown.

The multi-award-winning McKeever seamlessly weaves together these themes and more in his roughly 80-minute play. It never feels jumbled.

Rather, Mr. Parker is a cohesive play which warms the heart, even while it breaks it.

By the way, audience discretion is a good idea. There’s a scene in which one of the characters is completely naked.

More figuratively, McKeever peels away Mr. Parker’s protective layers to reveal him in all his vulnerability.

The middle-aged title character lives in present-day New York City. He has lost his long-time husband to a car accident and is behind the times technologically. While our protagonist is getting along the best he can, it’s clear Mr. Parker isn’t the same person. He feels lost, and rarely goes outside.

That is, until he enters a bar one night and meets Justin, a free-spirited man in his late 20s (an impressive Samuel Maya). Somehow, Justin ends up in Mr. Parker’s bed the next morning. Apparently, Mr. Parker was a bit too tipsy to remember exactly what happened.

The young bartender/Uber driver appears to share little in common with the older man. Nevertheless, a touching, if sometimes testy relationship develops.

Indeed, two people who probably thought they’d die without knowing either end up affecting each other in surprising ways.

For Mr. Parker, Justin represents a second chance at happiness. But while the world has vastly changed in the years since his husband’s death, relationships, gay or straight, have maintained their fickleness. However, because these men knew each other, they’ve changed for good.

While McKeever’s play looks ahead, it also looks back. The title character struggles with holding onto his husband Jeffrey’s memory. But his sister-in-law, Cassandra, encourages Mr. Parker to let go.

“My darling. He’s gone,” Cassandra (a terrific Margot Moreland) tells him simply, but with more compassionate than she normally shows her brother-in-law.

Disagreements between adult siblings are nothing new to the stage. Still, even though Mr. Parker doesn’t offer anything groundbreaking on that topic, it’s hard not to relate to or feel moved by the characters’ plight.

Deciding whether to take a loved one off of life support has to be one of the most heart-wrenching choices a person can face. Sure, months have passed since Jeffrey’s death, but these two survivors talk about it with such raw emotion, you sense Jeffrey has just died.

And then there are questions about how to keep alive the late man’s legacy. What even best constitutes a legacy?

By including issues pertaining to art, McKeever isn’t venturing off topic. To be sure, people often remember their dearly departed not just by their human qualities, but by their contributions and creations.

Undoubtedly, Jeffrey was someone who created. Whether it was “art” depends on which character you ask. McKeever doesn’t favor one over position over another. He leaves it for us to ponder.

McKeever is an award-winning, versatile playwright, actor, designer and founding member of Miami’s award-winning Zoetic Stage. But with Mr. Parker, he writes from personal experience.

In an interview with the Sun-Sentinel, he said, “As a 54-year-old man, I look at the world we live in — our dependence on social media, the fact that we spend so much of our day on our phones — and I ask, "WTH?" This is one of the major issues addressed in the play.”

Specifically, in satiric fashion, McKeever describes a decision Jeffrey made after his portrait subjects’ eyes were constantly glued to their cell phones. After he’d had enough, Jeffrey started making artistic statements about our obsession with these devices and their effect on personable communication.

Of course, Mr. Parker wouldn’t know about such an effect; he only has a land line.

But by the play’s end, this man has at least taken a step into the 21st century. That’s in no small part thanks to Justin, who also learns a few things from Mr. Parker.

Speaking of learning things, the three-person cast puts on a master class in acting.

McKeever endows his character with bewilderment, in a sweet, endearing manner, at a world he’s not used to. McKeever’s Mr. Parker is often charming and always likable. You can see why Jeffrey wanted to spend his life with this man.

Meanwhile, McKeever is just as effective when Mr. Parker is angry, shouting at his sister-in-law with wide eyes and in a convincingly harsh tone. When this man is hurt and lost, he makes the feelings palpable. His eyes dart helplessly and he looks genuinely forlorn.

By contrast, Samuel Maya invests the younger Justin with a carefree, laid-back, fast-talking and confident demeanor. Maya makes Justin shameless, in a way, but not unlikeable. He simply lives a different lifestyle, suggested not just by his demeanor, but his loose clothes. One of his shirts (designed, along with the other costumes, by Peter A. Lovello) says “Slacker.” The term aptly describes this man, whose father basically considers him one.

To his credit, Maya delivers a well-rounded performance. When Justin is angry, hurt, compassionate, or learns something about himself, the actor’s performance seems just as sincere.

There’s palpable, heated conflict between Cassie and her brother-in-law, just as there’s tension between past and present in set designer Landhuis’ depiction of the former artist’s studio where Mr. Parker lives. Its red brick walls suggest the building’s historic character. But there’s also a modern ambience to the place. This might suggest the future is calling to Mr. Parker, even if he won’t listen.

We might raise our eyebrows at Mr. Parker’s failure to adapt to the 21st century. Still, there’s plenty with which to identify in this promising play.

The main character just happens to be gay – Island City Stage’s mission is, in part, “to create quality theatrical experiences that focus on the LGBTQ community.”

But the company’s mission statement also reads that its theatrical experiences “have a heart and soul that is truly universal.”

Furthermore, this award-winning company’s slogan is “Our lives. Our stories.”

No doubt, Mr. Parker is one of our stories.

Mr. Parker runs through July 15 at Island City Stage, 2304 N. Dixie Highway in Wilton Manors. Performances are at 8 p.m. Thursday through Saturday as well as 5 p.m. Sunday. For tickets and more information, visit islandcitystage.org or call (954) 519-2533.