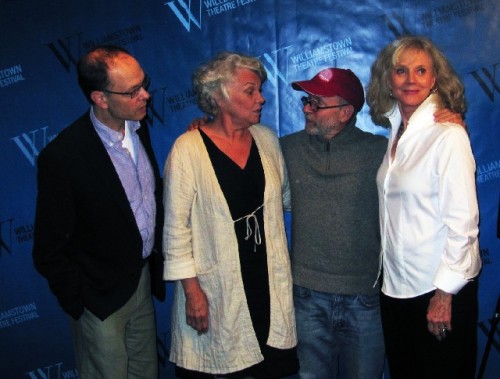 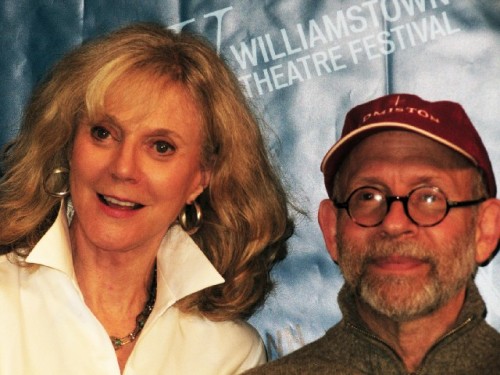 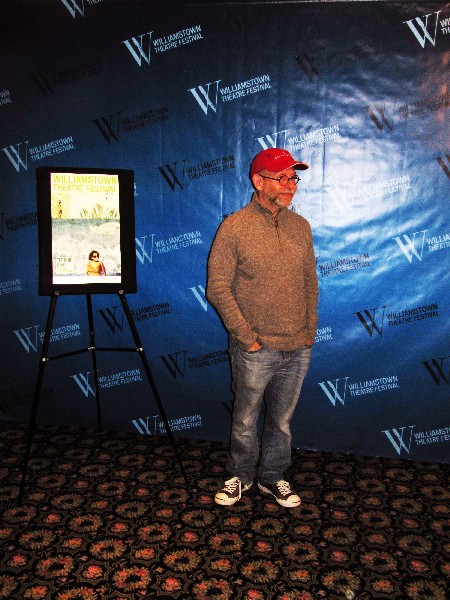 Balaban on the red Carpet. 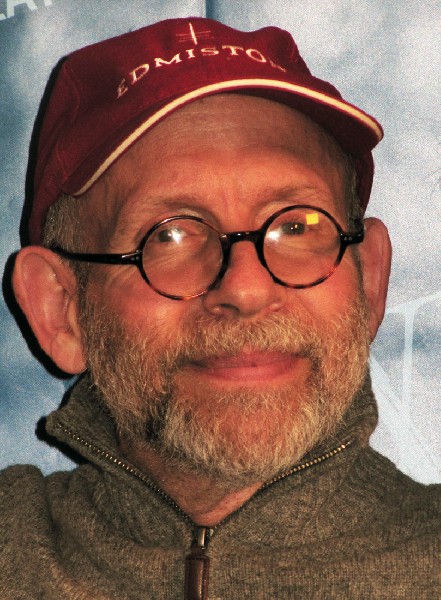 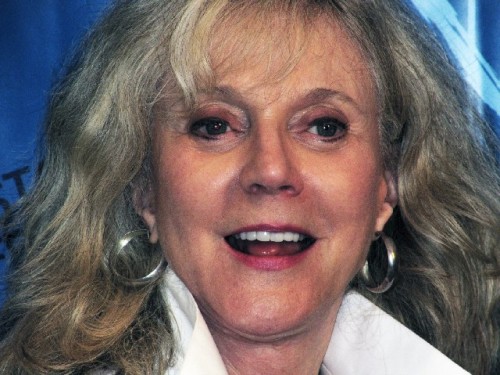 After a hiatus of a dozen years Danner is thrilled to return to WTF. 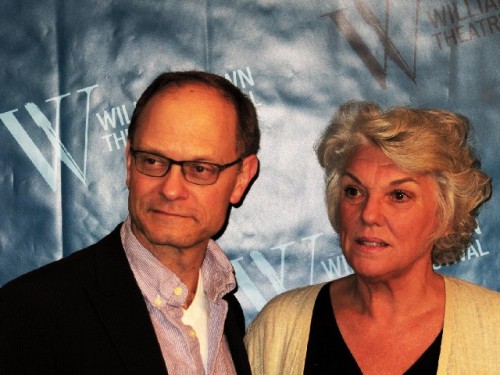 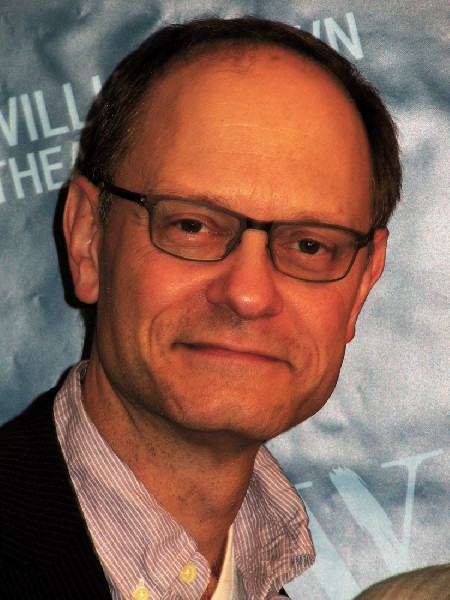 Success in the long running Frasier has allowed Pierce to opt for projects that interest him. 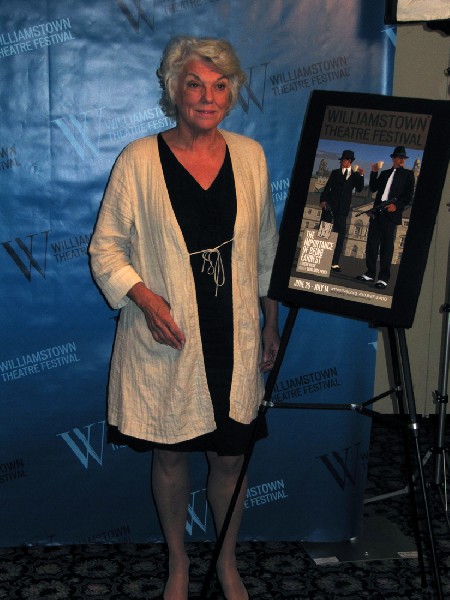 A long shot of Tyne Daly. 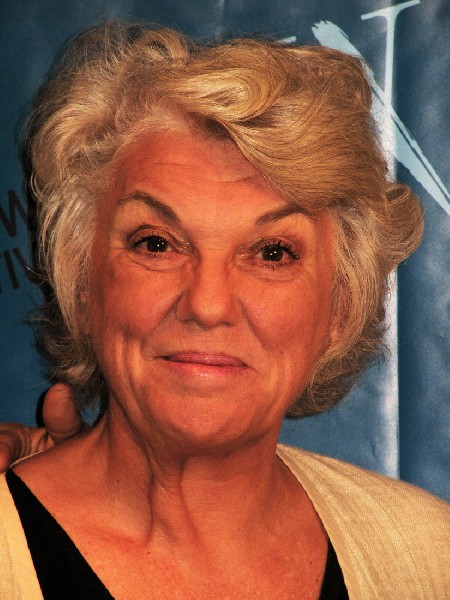 Daly was a memorable Mama Rose in Gypsy. 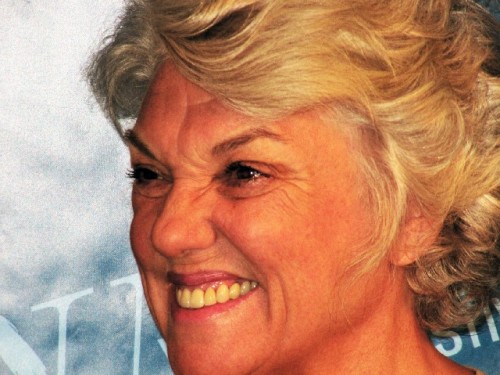 It’s quite a shift from the tough cop of Cagney and Lacey to a proper lady in The Importance of Being Earnest.

To launch her second season for the Williamstown Theatre Festival in a unique move yesterday, artistic director, Jenny Gersten, pitched a double header to the media at the Williams Inn.

On Thursday, June 28, WTF will open two shows: Oscar Wilde’s The Importance of Being Earnest, directed by David Hyde Pierce, on the Main Stage. The more intimate Nikos Stage will feature the world premiere of The Deep Blue directed by Bob Balaban with Becky Ann Baker and a return to Williamstown after a long absence of a perennial favorite, Blythe Danner.

Taking a break from rehearsals at the end of the day Gersten was proud as punch to introduce Blythe Danner, Tyne Daly, David Hyde Pierce, and Bob Balaban.

She described the rigors of the festival format which allows for just three weeks of rehearsal before opening night. That encourages going with gut instincts. The actors and directors commented on how supportive and inspiring WTF is in allowing for open ended creativity and state of the art technical resources. During its summer run, typically, WTF mounts shows that meet Broadway and Off Broadway standards.

Occasionally, WTF productions do in fact move on to New York. But as Gersten commented that is not the mandate for the festival. The approach is more let’s have fun, experiment, and see what happens.

When asked if indeed any of the upcoming shows had plans to travel Pierce had an amusing response. At the end of the show he said “We’re moving it to North Adams.” Daly added “Then to Pittsfield.”

Facing that daunting three week limit for rehearsal I asked how much they prepare before reaching Williamstown? How soon during rehearsals, for example, are they off book? Daly became an American icon during the run from October 8, 1981 to May 16, 1988 of the game changing cop show Cagney and Lacey. During a one on one Daly, who appears in musicals and cabaret in addition to drama, mentioned that she is now 66. She described how it is now more difficult to learn her lines. As soon as she is booked for a show she starts working on the script.

Of course shooting a film is different. If you blow a line there is the option for another take. And you can learn the lines on a day to day basis. But, I asked, isn’t shooting an Indy rather like the tight schedule of a festival?

Sure, they responded. On the tight budgets of Indy films there is the same kind of intensity and spontaneity. “When you aren’t spending millions there isn’t the pressure of producers standing over your shoulder” Danner commented.

During my allotted face time I asked Danner about a role as a mother in conflict with her daughter who has returned home after a failed marriage in Hello I Must Be Going. Since it has not been released she was surprised that I had seen it. “It opened at Sundance” she said. Locally it was included in the Berkshire International Film Festival. I reminded her that we had talked last summer prior to her appearance at the now discontinued annual Tanglewood Jazz Festival. Gamely, she sang a couple of standards. “I love to sing but I’m not very good at it” she commented.

From 1974 to 1986 she appeared annually at WTF and in seven shows during the following decade. Her last WTF appearance, other than a reading last summer, was in 2000 for Tonight at 8:30.

She recalled being pregnant with her son during a WTF run. To disguise her pregnancy she was festooned with layers of organza. But during a dramatic moment on stage she uttered an audible, causing concern from a fellow actor, when her son delivered a swift kick.

Oh, the perils of Show Biz.

Currently Danner is seen regularly on TV in a national ad for the drug Prolia. There is a tag line before performing when a stage hand says “Break a leg.” Denosumab injection (Prolia) is used to treat osteoporosis (a condition in which the bones become thin and weak and break easily) in women who have undergone menopause and have an increased risk for fractures.

Gamely, I asked if she takes Prolia or just promotes it? I learned that the law requires that actors must use the drugs that they advertise. During our last conversation she focused on her activism so I was not surprised when she described how many undiagnosed women suffer fractures.

During the 2011 Williamstown Film Festival there was a screening of David Hyde Pierce’s The Perfect Host. He had just opened on Broadway in La Bete which transferred after a three month run in the West End. So we didn’t get to meet him at that time.

In the New York Times Stephen Holden wrote that “Warwick Wilson, the prim, dapper title character of “The Perfect Host,” played by David Hyde Pierce seems at first to be a clone of Waldo Lydecker, the snobbish newspaper columnist of Otto Preminger’s film-noir classic “Laura.” As Warwick jousts with John Taylor (Clayne Crawford), a scruffy bank robber on the lam who talks his way into Warwick’s immaculate Los Angeles lair, you expect an insidious tug of war between an aesthete and a roughneck, similar to the power struggle of Clifton Webb’s imperious dandy and Dana Andrews’s earthy detective in “Laura.”

His character Warwick Wilson was simply outrageous. “At the beginning of the film” he told me “the character reminds people of my role in Frazier. Then he turns very dark.”

In part due to his close physical resemblance to Kelsey Grammer the producers of the Cheers spin-off Frasier created the role of Niles Crane (Frasier Crane's younger brother) for him. Although prior to Frasier going into production, Pierce had petitioned the Screen Actors Guild to change his billing to David Pierce, the name he had used on the stage, the use of his middle name in the show's credits helped reinforce the actor's and the character's "snooty" image. For his work on Frasier, Pierce was nominated for a Best Supporting Actor Emmy a record eleven consecutive years, winning in 1995, 1998, 1999 and 2004.

We asked about the motive for doing an independent film like The Perfect Host or coming to WTF under such challenging circumstances to direct The Importance of Being Earnest. It is only his second turn as a director. How many scripts is he reading on average and what attracts him to a specific project? He described how the long running success of Frasier has provided financial security. It allows for the luxury of taking on projects that interest him. Like being spat on each night by the outrageous Mark Rylance in La Bete. “That show allowed me to be in London for three months and work with some great actors.”

What about the challenge of directing the uber witty text of Oscar Wilde? We’ll find out next week how it works but Pierce’s twist will be to have the men speak like gangsters from a Damon Runyon novel.

"Our goal is to give the audience the play" Pierce said. "To shake it loose from the way that we're used to hearing it. Our goal is that after five minutes, 10 minutes, 15 minutes you will forget the concept and everything else and be reminded what a great play it is. Which we often forget."

What about that gangster riff? "It came from hearing Damon Runyon's voice in the Oscar Wilde characters" he said. "Damon Runyon, who wrote 'Guys and Dolls' and more importantly wrote all the short stories that it's based on, created the particular way of speaking. The New York City gangster. I discovered when you read a Damon Runyon short story, it reads equally well in that gangster dialect and in a British accent. If you read The Importance of Being Earnest it reads equally well in a gangster accent or a British accent."

With a rhetorical question I asked isn’t directing Wilde rather like creating a soufflé? You have to beat the crap out of the eggs and then hope that they rise into a light, puffy and delicious concoction.

Amusingly Pierce swallowed the bait with a wonderfully droll response. “You start by finding the best chickens” he said. “Then you hope that they lay fresh eggs.”

Daly, one of the chickens, chimed in asking “Have you ever made a soufflé? If it rises that’s wonderful. But if it doesn’t and goes flat you scoop it up anyway and it’s delicious.”

So now we have a failsafe game plan for what to anticipate on opening night next week. Will Wilde’s witty masterpiece prove to the a pufta soufflé or just scrambled eggs? Either way we are in for a treat.