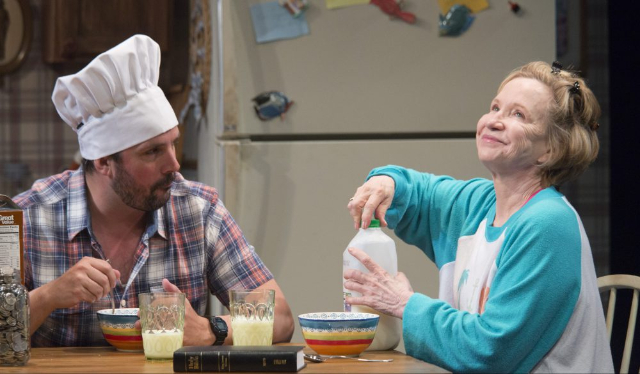 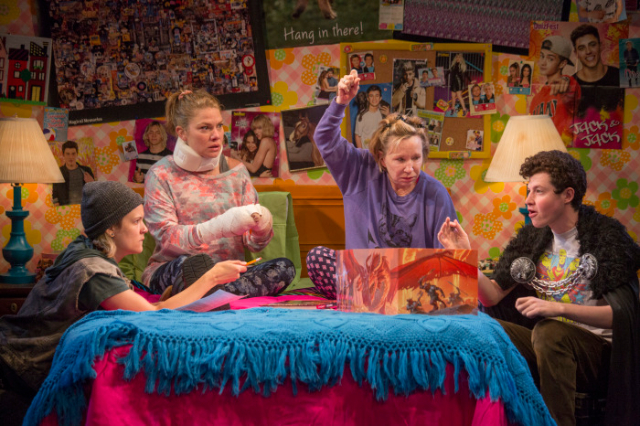 The heart and soul of David Lindsay-Abaire’s comedy about yet another dysfunctional family Kimberly Akimbo is the teenager Kimberly Lovaco (Debra Jo Rupp) who has a rare disease, progeria, that causes her to age at four and a half times the norm.

Rupp, who is brilliant with every role we have seen her in as a regular with this company, is a sixty-year-old woman who is utterly convincing as a precocious but wise beyond her years teenager.

Yet again its an astonishing delight to see her draw out every possible nuance of a girl coming of age in a body that is nearing the end of its life cycle.

During a conversation with an emerging boyfriend, the nerdy, game-loving Jeff,  aptly played by Adam Langdon, the DNA complexity of her condition is explained.

A deep dark family secret, however, is that a less than immaculate conception of her Mom Pattie (Jessiee Datino) and dad Buddy (Chris Thorn) may have been fathered by another guy.

It is likely to have been an elderly neighbor in New Jersey who grew cabbages and annoyed the hell out of Buddy. So much so that Kimberly’s butch, criminal, homeless and on the lam Aunt Debra (Jessica Savage) was hired to put a scare in him.

When the tale is told it seems she put on a pig mask, climbed in his window and, literally, scared him to death.

We learn that Debra has served time for forgery. She has hatched a plot to hang paper that involves Kimberly and her smitten pal Jeff.

For most of the first act there is little gravitas in Kimberly facing a life threatening disease. She is too busy being, well, a typical teenager.

She is intent on writing a science paper for which students have been asked to choose a disease. Her topic is glaucoma. Jeff, a classmate who she had mostly igored, wants to interview Kimberly about her disease. Thus starts their tender and groping path to puppy love.

Buddy, who is crude to the core, is freaked about her having sex and this is conveyed with rich comedy.

Delivering the best line of the evening she reassures him that she went though menopause four years ago.

While tragedy looms for this working class, not too bright, f-bombing family they pass time playing games.

Jeff likes to create anagrams. From her name Kimberly Lovaco, he has crafted the title and signifier of this comedic romp Kimberly Akimbo.

Of course the trope is that she is precisely that.

This makes us ponder the equation of age and wisdom.

There is that conundrum about the balance between age and wisdom. Is it a fair swap when we relinquish a youthful body for life experience?

The challenge for Rupp is to explore but tread cautiously on this fine line. It’s a remarkable feat that she has nailed masterfully.

In bringing off this theatrical legerdemain it helps that physically Rupp is petite with a pixie-like personality. Add to that her acting chops and this proves to be a perfect vehicle for a favorite of Berkshire audiences.

Yet again Rupp delivers a not to be missed performance.

She is the glue that binds a less than coherent play.

Be it the actor, script, or direction by Rob Ruggiero but the disparate elements of Buddy never meshed as a whole.

We get that he is a dense, sloppy, negligent, alcoholic but oddly loving and affectionate dad. He is never quite there for her when either tardy picking her up from skating, or a day late and a dollar short for her all important, sweet sixteen birthday.

It is an unforgivable lapse as it may indeed be her last. The performance by Thorn never quite makes sense.

Wheras that of Pattie, who is about to break her water with a second child, is far too one dimensional. With an enormous belly, and pop out button that indicates that the kid is just about cooked, she is confined to a chair in the kitchen.

She has a litany of self absorbing ailments in addition to being very, very pregnant. Both arms are bandaged due to carpal tunnel surgery. This makes Datino's character grotesquely awkward and clumsy.

As a gift to the unborn girl she is speaking into a tape recorder. It's a Beckett-like Krapp's First Tape. The trick is to press the start button. In other scenes both Buddy and Kimberly steal the machine to add their thoughts to when the child will be old enough to hear them.

There are moments in this play which are hilarious and fun. Like when they are raucously playing Dungeons and Dragons. But exposition passages  are too hard to absorb and believe.

Yet again the technical aspects of a Barrington production are superb. Given the small stage Timothy Mackabee has created a cleverly modular set that allows for a variety of scenes from driving in the car, sitting in the kitchen, Kimberly’s typically teenage bedroom, and the school library.

With the always wonderful Debra Jo Rupp in its title role Kimberly Akimbo is a sure bet to delight Berkshire audiences.