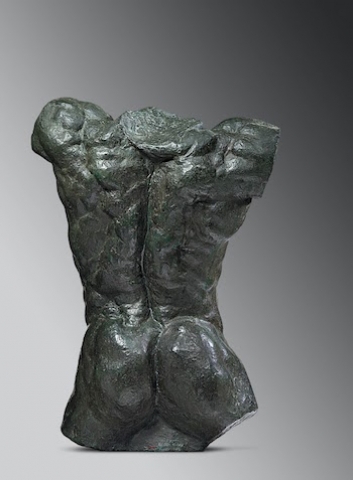 A pioneer of modern sculpture, Auguste Rodin (1840-1917) was a master artist who wrestled, physically and emotionally, with form, energy, and perception. A muscular aesthetic power, a sensuous humanity, infuses all of his work. His art seems to be the result of some sort of cosmic combat; the unyielding force of Rodin’s imagination charges through all of his aesthetic achievements.

Rodin: Transforming Sculpture displays the artist’s expressive versatility in plaster, marble or bronze, its pieces ranging from the intimate to the monumental. In his hands, the human form was shaped to tell an emotionally and psychologically complex story.

One of the truly great sculptors, Rodin also strategically and commandingly changed the language of the art form by working with accident and emphasizing the process of creation rather than the completion of a finished form. His pieces underscored change and transformation by favoring creative fragmentation and reassembly. This fine exhibit demonstrates the artist’s impressive range of sculptures and drawings, the curatorial accent placed on the deeply dramatic nature of his work.

The show’s original title was Metamorphoses: In Rodin’s Studio. The exhibition was organized by the Montreal Museum of Fine Arts, in collaboration with the Musée Rodin, Paris. It is traveling because the Musée Rodin is undergoing extensive and much needed renovations.

The exhibit spotlights the ways Rodin’s art and creative process fundamentally altered how we understand, interpret, and experience sculptural form. There are over 175 works here, and these include some of the artist’s most iconic sculptural statements as well as maquettes for famous larger pieces. The well known works include “The Thinker,” “The Kiss,” “The Hand of God,” several elements of the “Burghers of Calais” and various studies for the nude Balzac statue and “The Gates of Hell” (where “The Thinker” was first visualized). Each of these pieces demonstrate Rodin’s dogged exploration of  fragmentation, assembly, and recombination. Yet, paradoxically, the sculptures express a unity in imagination, gesture, movement, and expression.

Rodin’s studio or atelier served as creative workspace, exhibition hall, and intellectual salon. His work was housed there for visitors, potential patrons, and other artists to see. Like Renaissance masters as well as a number of prominent contemporary artists (Ai Wei Wei, Anish Kapoor, and Olifur Eliasson to name a few), he often had 50 or more “assistants” working for him in his studio. These included stone-cutters, cast form-makers, metal workers, photographers, models, etc. He studied models of varying ages: they were the source of his research into the most expressive gestures of the human form, his examination of the intricacies of contour, movement, and physicality.

Of course, Rodin served as the artistic director, entrepreneur, and creative force in his studio. He was the head of the factory, the conductor of his visual symphony. A lifelong student of Classical Greco-Roman forms, Medieval representations and Renaissance statuary, Rodin built on the visual brilliance of the past, drawing on tradition to develop his own personal style. The artist was an avid collector of antiquities, including fragments of Egyptian, Greek, Hellenistic, Etruscan, and Roman works in a variety of materials. He also gathered vessels and figurines in terracotta and stone. Rodin based a number of his artistic explorations on his rich collections: he felt that studying the past gave him the means to advance the language of sculpture by creatively breaking from traditional forms.

For the above and other reasons, Rodin is considered one of the earliest modern sculptors. His work built on conventional notions of sculpture and statuary and took it several steps further by experimenting, extending notions of what made form, content, and context strike us as energetic, even “alive.”

Rodin never felt a sculpture was totally finished. To him, it could always somehow be made better. Also, he loved to play around with form, focusing in particular on how the physical could be shaped to give off startling emotion and psychological cues. He was constantly “reinventing” his idea of form, using different sculptural techniques to manipulate proportion and scale.

Rodin sometimes mixed, recycled,, and re-combined used “spare parts”: plaster-cast heads, torsos, arms, and legs. His mix-and-match sensibility was the inevitable result of his deep belief that art is always in transition, never complete. And these hybrid assemblages were put together in ways that are intended to evoke passion and reaction.

The content of this exhibit is rather overwhelming. There is just too much to contend with, as if the idea was to reach an academic ideal of completeness.The quality of the artwork is not debatable, but the imposing quantity is. Fewer plaster casts would have been more. Additionally, with so much on view, the exhibition space quickly becomes crowded. Diminished enjoyment is the inevitable result of too many enthusiastic visitors, showcases, dancers, and large sculptures.

Yes, there are live athletic dancers in the show as well. Conceptually, this is a promising idea, but in reality the performances just seem to add to the visual cacophony. Another negative is the underwhelming attempt to add “contemporary relevance” to the exhibit with something called The Burghers of Vancouver, a video installation that “revisits the idea of the urban monument by taking apart and putting back together the sculpted group using actors.” It is featured in the show’s last room, where it comes off as more of a miscue than an addition.

Still, Rodin: Transforming Sculpture is a rare and not-to-be-missed visual treat. As this important show proves, Rodin, nearly a century after his death, remains one of the greatest artists of the late 19th and early 20th centuries. A pioneering modernist, he took on a challenging quest that continues to demand our attention: he reworked classical and ancient forms in ways that reflected a contemporary spirit.

This article is republished by permission of Arts Fuse where it was originally published.