Shakespeare in a Chicago Storefront Theater 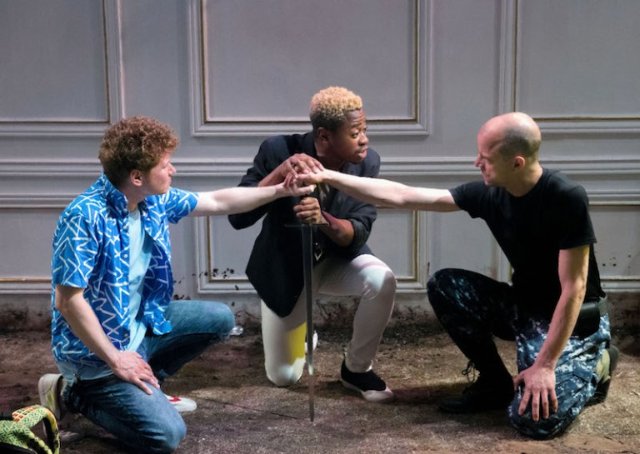 Sometimes you see a familiar play, one that you’ve seen many times, and it gains new power because of the casting and staging or the mood created by the director. I felt that way after seeing Gift Theatre’s luminous production of William Shakespeare’s Hamlet. The production is a stripped-down staging with suggestions of classic elegance but contemporary hipster dress and props. Monty Cole’s direction focuses strongly on the language, which is delivered with passion and meaning by most of the cast—but in particular in a powerful performance by Daniel Kyri as Hamlet.

The story begins in the classic way. Hamlet, a young black man, returns home to Denmark after the death of his father and the immediate marriage of his mother (Shanesia Davis plays Gertrude) to his uncle Claudius (a Trumplike John Kelly Connolly). Claudius’ first speech is staged as an oration at his coronation ceremony, spoken into a hand mic. After the newly crowned king and queen depart, Hamlet laments the marriage in his “frailty, thy name is woman” monologue.

Hamlet’s friend Horatio (Casey Morris) has seen the ghost of Hamlet’s father on the ramparts around the castle, where the guards keep watch for the forces of young Fortinbras of Norway. Horatio tells Hamlet of the sighting of the ghost and Hamlet resolves to join the watch. The ghost of his father (Robert Cornelius) appears in hospital gown and death mask.

Later we meet Laertes (Gregory Fenner) and his sister Ophelia (a stunning Netta Walker) playing a video game while he counsels her on Hamlet’s approaches to her. Does he really love her? Laertes asks. Later his father, the Lord Chamberlain Polonius (Robert Cornelius) admonishes Laertes on his trip to France in the “to thine own self be true” speech.

The other elements essential to the Hamlet narrative resound here too. Rosenkrantz and Guildenstern (Hannah Toriumi and Martel Manning) help Hamlet prepare the visiting players to perform “The Murder of Gonzaga.” And the gravedigger unearths the skull of “poor Yorick.” Laertes’ plot with Claudius (conducted as they play golf) results in the closing clash between Hamlet and Laertes, fought with foils, and the arrival of young Fortinbras.

The famous speeches are pronounced in their classic language—not contemporized—and they gain new meaning in this excellent staging by Monty Cole.

Gift’s Hamlet is staged with a predominantly African American cast and yet the play isn’t about racism…. or is it? It’s not explicitly, yet it reminds us that it’s only in recent years that African Americans have routinely been cast in classic roles. (And diversity in casting is still a serious and divisive issue in the theater community.)

Many years ago, I saw a production of Hamlet, directed by Tyrone Guthrie, during the opening season of the Tyrone Guthrie Theater in Minneapolis. It was 1963. George Grizzard played Hamlet and Graham Brown, a black actor, played Horatio. The casting choice probably was noticed by audience members but no one seemed to think it was remarkable. The local theater review didn’t mention it. That was 55 years ago. Why did it take so many decades before this type of casting became anything close to standard?

Another memorable production of Hamlet was Robert Falls’ brilliant staging for the late Wisdom Bridge Theater in 1985. Aidan Quinn starred as Hamlet. The play started at Wisdom Bridge’s venue on Howard Street and then moved to the Civic Theatre in 1986. There were many modern touches to the staging. I remembered this production when the current Hamlet spray-paints an excerpt from a speech (“your silence will not protect you,”) perhaps in homage to Quinn beginning Hamlet’s most famous speech by spraypainting, “to be or not to be.”

William Boles’ scenic design creates a narrow hallway in what might be an anteroom in the castle. Ornate wall sconces are balanced with a dirt floor and occasional piles of empty beer cans. The actors and audience are separated by a wall of plexiglass at the front of the stage, which functions as window and wailing wall. Lighting sometimes casts strange angles across the wall. Claire Chrzan and Michelle D. Bends are lighting designers with sound design by Jeffrey Levin. Costumes are by Samantha C. Jones. Gaby Labotka is fight director.

Hamlet continues at the Gift Theatre, 4802 N. Milwaukee Ave., through July 29, with performances Thursday-Sunday. Tickets are $35-40. The play runs three hours with one intermission. The Gift storefront is located one block from the Jefferson Park Blue Line station.