O'Casey's The Plough and the Stars

At the Irish Repertory Theatre 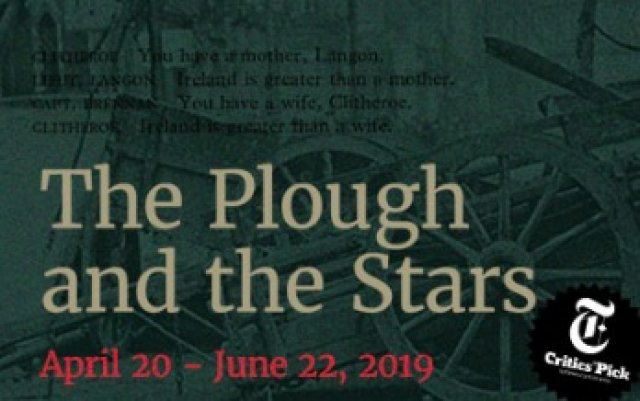 A superb production of Sean O’Casey’s play, The Plough and the Stars, concludes the Irish Repertory Theatre’s O’Casey cycle.  Charlotte Moore directs this subtly textured staging, deploying all the tools her theatre and actors have honed over the years.

The Plough and The Stars is a tough play.  It is more history than character driven.  Yet each of the cast of 14 actors has a chance to display rich human emotion and poetic language.

Charlotte Moore is known to be a miracle worker.  Making her home space serve as the main room of a  tenement, a bar, a cramped attic room and the street is no mean feat.  We only see the results.  Dublin 1915-16 is created.  The Easter uprising of that period is the backdrop and also foreground of the play.

Rat-a-tat-tats of gun shots are first introduced when one of the three principal characters, Fluther Good (Michael Mellamphy), fixes the front tenement door to keep unwanted intruders out and to keep the place safe.  His hammer does not prevent the uprising from entering the tenement  and uprooting the lives (and deaths) of its residents. Mellamphy fixes the role of a man determined to quit booze and unable to stay away as the war rages around him.

Language is important to O’Casey.  If you did not know the meaning of 'derogatory' before you arrived at the theatre, you will not know it when you leave.  It is Fluther’s favorite word. He uses it describe any and all situations.

The sound of the lilting Irish dialect is rich and richly delivered by every member of the cast.  Messages are expanded for special effect.  Nora (Clare O’Malley) says: “It’s hard for a body to be always keepin’ her mind but on makin’ thoughts that’ll be no longer had th’ length of your own satisfactin’."  O' Casey is both recording and elaborating on Dublin speech.  Uncle Peter (Robert Langdon Lloyd), who feels like Don Quixote, says so many extra words that we pleasurably drown in his exaggerations. Yet who can resist, "As long as I'm a livin' man, responsible. for me thoughts, words an' deeds to th' Man above, I'll feel mewself instituted to fight again' th' sliddherin' ways of a pair o' picaroons, whisperin' concurrin' concoctin' an' conspirin' together to rendher me unconscious of th' life I'm thryin' to live!"

Although the characters in the play are stand-ins for situations and ideas, each of them is distinguished by costume, speech and defining performances.  Even the Woman from Wrathmines (a swank suburb), whose presence on stage is under three minutes long, is clear cut.  We feel that she must escape to her middle class home.  This seemingly unnecessary figure is never cut from the play because her presence becomes etched in our minds.  Terry Donnelly memorably struts and trembles in the role.

There are wonderful, humorous moments to lighten our load as the play proceeds to its tragic ending.  Looking at a copy of Giorgione’s “The Sleeping Venus”, which hangs above the fireplace, Mrs. Gogan, a tenant, shrieks and leaves the house. Una Clancy brilliantly plays this role of a busy body charwoman whose attention is fixed on every detail of the ongoing action.  Mrs. Gogan is mortified that she has stared at a naked woman in front of male tenants.  Mrs. Gogan, whose daughter Mollser (Meg Hennessy) is dying of tuberculosis, joins with her enemy Bessie Burges (Maryann Plunkett) to loot homes and stores emptied by gunshots.

Plunkett's picture of Bessie is rich with irony and energy.  She pushes her way into the tenement, complaining that Nora has put a new lock on the door. This is another sign of Nora's uppity ways.  "Gettin' on the nerves of her ladyship (Nora)."

Bessie will meet her maker trying to save Nora.

Without hammering in the similarity to our current situation, this production clearly presents O’Casey’s view that when a labor movement and nationalism join forces, labor is hurt.  This play is poignant in its own right, but made all the more so as we experience the madness and death of characters who mistakenly get involved in the movement.