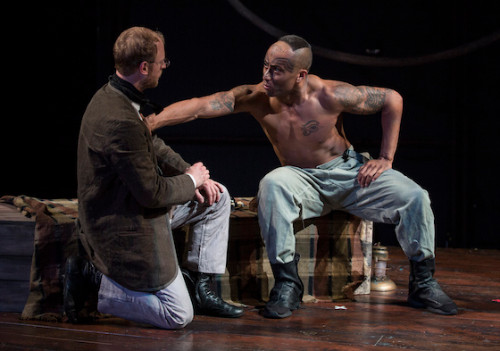 Abelson and Fleming as Ishmael and Queequeg. Photo by Liz Lauren.

Lookingglass Theatre's new production of Moby Dick gives a modern infusion of energy and fluidity to Herman Melville's 19th century whaling tale. The sprawling 700-page novel is smartly encapsulated into a two-and-three-quarter hour play without losing any of its sense of awe and terror at the power of the great sea creature sought by the monomaniacal Captain Ahab. David Catlin's adaptation and direction are both superlative and his dialogue retains much of Melville's poetic language.

Lookingglass's black box theater in the old Water Works on Michigan Avenue becomes the interior of a great whale with steel hoops extending from stage rear to the top of the theater. You really feel you're in the belly of the beast. Ropes, rafts and pulleys are manipulated by the excellent cast of seven seamen plus three actors who become characters as well as forces of nature, as the script requires.

Naturally, given that it's Lookingglass partnering with the Actors Gymnasium, the performance is very physical with seamen clamoring up, hanging on, swinging and speaking from poles, hoops and masts.

The extremely creative staging by Courtney O'Neill is visual magic. Dark blue silk fabric becomes the waves of the sea and a splendid white cloud of fabric floats over our heads and the great white whale finally appears to the crew of the Pequod. Three female actors (Emma Cadd, Kasey Foster and Monica West) perform dozens of roles, flinging off cloaks to become fish and swooping around and over the stage to become wind or waves.

The cast of seven whalers, led by Christopher Donohue as the progressively mad Ahab, is excellent. Jamie Abelson is a strong Ishmael, the narrator and voice of the Pequod story. Anthony Fleming III is powerful as the native Queequeg, who left his South Pacific home to become a whaler and earn the right to wear the crown of his native land. He and Ishmael get acquainted when they share a room at an inn in New Bedford.

Queequeg: My father is king of Kokovoko. Kokovoko not on any map.

Queequeg: My father king, and I am next. When he is gone, I am to be king of Kokovoko. But I'm not ready. I want to go out into world...I want to...do exciting things, I want to, to...

Ishmael: To 'sow your wild oats'.

Queequeg: Yes. I want to feel alive. I want to...escape.... He's dying-- My father is dying. And I'm not ready. The time is coming for him to drift away... To hunt and fish in the islands in night sky.

Starbuck, the voice of reason and counterpoint to Ahab's madness, is forcefully played by Kareem Bandealy. He fails in his argument to Ahab that bringing home whale oil to the U.S. market will be more rewarding to the Pequod and its crew than Ahab's quest to slaughter the great white whale. Ahab is obsessed with Moby Dick because "his leg was...devoured...(gnaaaaaash)...chewed up...(tearrrr)....crunched...(ssswallow) by the most monstrousest parmacetty that ever chipped a boat."

When whales are first sighted, the three women in black march around the stage, black umbrellas held aloft, personifying the approach of the whales to the Pequod. A whale is harpooned and butchered by the crew and the understructure of a white hoop skirt becomes a whale's skeleton.

This has been a good time for Melville in Chicago. Shattered Globe's production of The Whaleship Essex last fall was a fine introduction. The Essex story of the whalers battling an enraged sperm whale inspired Melville's writing of Moby Dick. House Theatre's Season on the Line dramatized the story of an obsessive theater director determined to produce a great new version of the white whale story. And the Phantom Collective, a Chicago pub theater group, presented a staged reading of A Damp Drizzly November in My Soul: A Tribute to Melville's Moby Dick last November at The Grafton Pub.

Moby Dick has been dramatized on film many times. John Huston's 1956 version starring Gregory Peck as the tortured Ahab is considered the film masterpiece of the Melville genre. Ron Howard's new film, In the Heart of the Sea, is the story of the Whaleship Essex. A December 2015 release is planned.

Lookingglass Theatre's production of Moby Dick has been extended and will run through August 28 at 821 N. Michigan Ave. at Pearson in the old Water Tower Water Works. The play is performed with two intermissions. Performances are Tuesday through Sunday at varying times with some 2pm performances on weekdays and weekends. Tickets for $40-80 can be purchased online or by calling 312-337-0665.