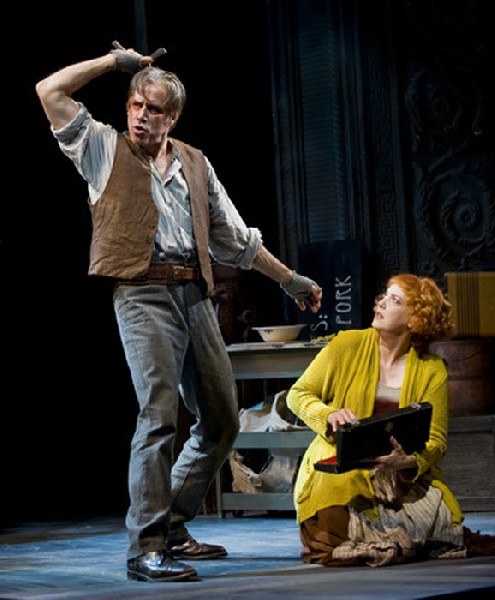 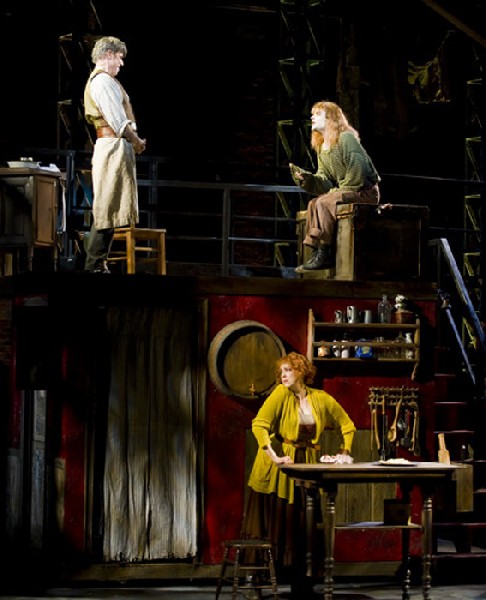 His barber shop is set up over her bakery with grim consequences. 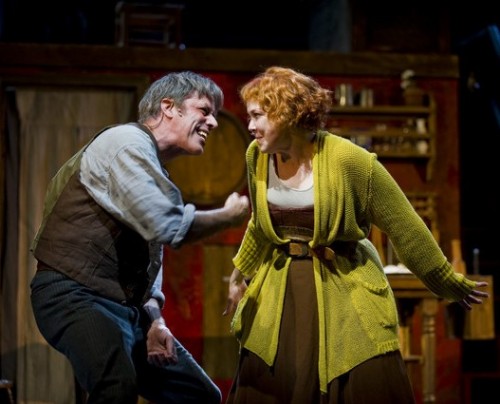 They are well matched partners in crime. 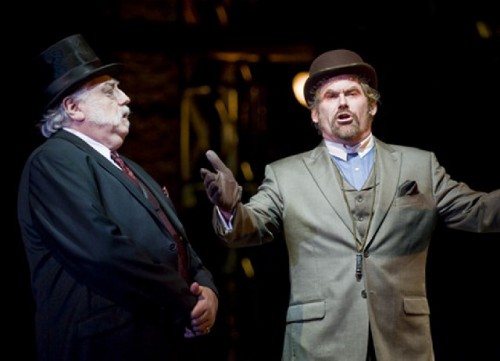 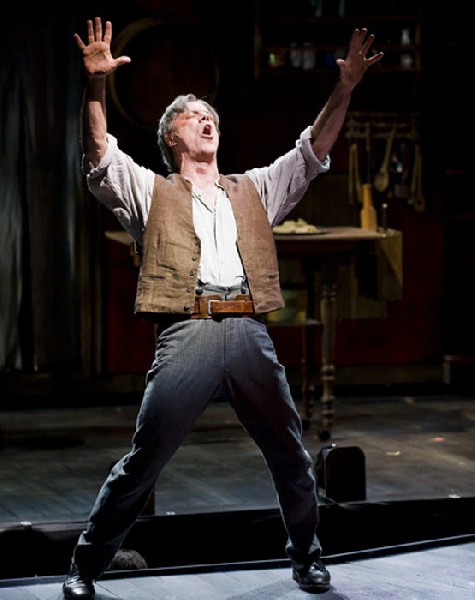 Sweeney revels at slicing up his enemies as well as innocent clients who have come by for a shave. 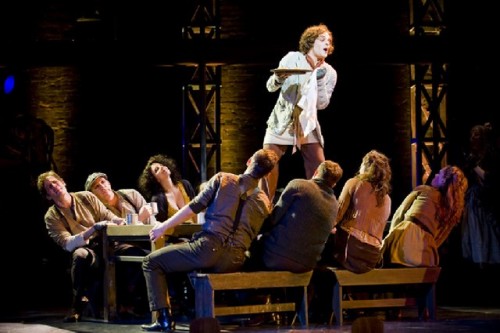 Mrs. Lovett’s meat pies are selling like hot cakes to the hungry masses. 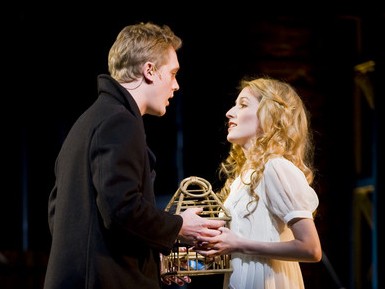 The sailor who rescued Sweeney from the sea Anthony Hope (Shonn Wiley) has fallen in love with Johanna Barker (Sarah Stevens).

Barrington Stage Company is serving a piping hot and gruesomely delicious production of  80-year-old musical genius, Stephen Sondheim’s masterpiece, Sweeney Todd. This evening of operatic mayhem is as dark, grim, macabre and vengeful as one of  Mrs. Lovett’s cannibalistic concoctions. The pies created from triple ground, meaty morsels of the victims of Sweeney Todd the Demon Barber of Fleet Street are a recipe for success. This musical of riveting horror is sure to be a runaway hit with Berkshire audiences.

Be warned. This show is not for the squeamish or faint of heart. It is an evening of massacre and a blood bath of outlandish, ironic comedy. By the end of the second act the corpses piled on stage recall the conclusion of Hamlet.

Julianne Boyd, the artistic director of Barrington Stage Company, is particularly noted for her passion for musicals. They always lead the season in Pittsfield. This may be her best ever. That’s saying a lot considering last year’s joyous Carousel by Richard Rodgers and Oscar Hammerstein, the home grown hit 25th Annual Putnam County Spelling Bee, and Sondheim/ Leonard Bernstein’s West Side Story the season before that.

Given the savvy but economical production values, a super set and costumes, with a magnificent cast, this is Broadway in the Berkshires. But up close and personal in an intimate theatre at a fraction of the cost of tickets on the Great White Way.

Where in past productions Boyd skimped on instruments, like two pianos, this time she is all in, Texas holdem style, trumping with a full house of a marvelous nine piece orchestra. It is superbly conducted by music director Darren Cohen.

It makes all the difference in the world. Through Sondheim’s galvanic  music we are subsumed in the unique and sublime horrors of the macabre vision of that sicko, twisto Stephen Sondheim. Forget about that lightweight Phantom of the Opera. It is Sondheim’s Sweeney Todd who reigns as musical theatre’s prince of darkness.

Jeff McCarthy absolutely owns this role as the obsessed and cunning Sweeney Todd. McCarthy is a powerful singer capable of blowing your socks off.  He is also a paradigmatic leading man and  a superbly evocative actor. He is easy on the eyes as well as the ears. Your blood curdles as Todd carves out a scheme of revenge in the opening chorus of “The Ballad of Sweeney Todd.” This is followed by his grim view of “No Place Like London. " He returns to the dodgy city of Dickens as an escaped prisoner from a penal colony. In “The Barber and His Wife” we learn of the terrible injustice to his family including the seduction and rape of his wife by the evil Judge Turpin (Ed Dixon) and his cohort in crime Beadle Bamford (Timothy Shew).

Todd's monolithic scheme is to lure his enemies into a barber’s chair there to give them the closest shave of their life. In an affair of convenience, devoid of love on his part, Todd teams up with the widowed Mrs. Lovett (Harriet Harris). Her pie shop is failing and needs a new ingredient, considering the cost of meat. Those corpses ejected from his  barber's chair are swept like human trash down a garbage shoot to the basement. There to be recycled into her meat pies that sells like hotcakes.

The subplot is that Todd’s daughter Johanna Barker (Sarah Stevens) has become the ward of Judge Turpin. Now that she has grown into a woman he plans to marry her. But the sailor Anthony Hope (Shonn Wiley), who rescued him from a raft, has spotted her in a window and fallen in love. The young and beautiful lovers are the only survivors of this Grand Guignol. Sondheim recycled his tale from the trash heap of 19th century, British theatre and popular literature.

That signature Sondheim music dissonantly wrenches its way through our ears into our brain,  twisting and turning  its way down through our guts, resulting in a steaming dung heap of  turgid emotion. Todd proclaims that vividly in the lyrics that inform us of his misanthropic view of London as a festering human cesspool stinking with shit. Bloody demented bloke that Todd.

With the exception of his only hit “Send in the Clowns” you never exit from a Sondheim musical whistling a happy tune. The music is dark, complex and full of nuanced shading. The lyrics, more than in any other musicals, advance the plot. They dig down deep into the characters and situations. There is no more challenging music this side of opera. Sondheim at his lightest and most lilting is heard in West Side Story but that's all about the music of Leonard Bernstein. He was talked into the collaboration by his mentor Oscar Hammerstein.

Although Sondheim's  songs were never standards with the general public they have provided a treasure trove for the most skilled cabaret artists. It takes intense concentration to listen to and extract all the embedded content. Especially when, as in this production, it is sung simultaneously with point and counterpoint by different performers. It is truly Wagnerian in its convoluted, smarmy complexity.

Kudos to Boyd and her wonderful collaborators. This team has risen to the challenges of taking on and triumphing in a  stunning rendering of the best of Sondheim. Later this season Barrington will stage a youth production of  his Into the Woods. Previously Barrington presented Sondheim’s A Little Night Music in 1997, Company in 2000, Follies in 2005 and West Side Story in 2007. Surely, as Boyd told the opening night audience, we have not heard the last of Sondheim in Pittsfield. A reminder, if you enjoy Sweeney Todd, be sure to also see his  A Funny Thing Happened on the Way to the Forum which is about to open at the Williamstown Theatre Festival.

It is difficult adequately  to praise individual performers or technical aspects of the production. Rarely have we encountered more seamless work. The casting, down to the smallest detail, is awesome. The quality of the singing is truly phenomenal. The leading couple of McCarthy and Harris are as good as it gets. But that same standard of excellence was conveyed throughout the cast. There were even staggering surprises in the chorus. What wonderful voices.  Other than Tanglewood, this may be the best group of singers ever assembled on stage in the Berkshires.

That said we must have a special mention of Christianne Tisdale as the evocative Beggar Woman. She is the smeared up, fetid, gutter snipe and surrogate of London’s sewer of humanity. Her character is woven through the narrative. After begging for alms she tosses up her skirts and thrusts her scruffy muff in our face. There is mystery and charisma to the character who turns out to be the linchpin of the plot. Boyd has wisely given her considerable latitude to craft an unforgettable performance.

It is interesting to note that Sondheim’s grim portrait of the cruel and desperate underbelly of London at mid 19th century is a period portrait. Currently Britain is forced to cut back on the social entitlement programs that are bankrupting the national budget. Sweeny Todd informs us of an era before the dole. Children were thieves and beggars while women sold their bodies for a crust of bread. The downtrodden drowned their sorrows in gin. Those were tough times for the refuse of Colonialism and the detritus of the Industrial Revolution. There are few if any reddeming social values to Sondheim's bleak view of the human condition. The evil Judge Turpin (Ed Dixon) is a signifier for Great Britain and its cruel indifference to the suffering of the under class. That we "enjoy" the experience is an acquired taste and guilty pleasure. The master devilishly subverts us as conspiritors in the dark arts.

In launching its season with Sweeney Todd Barrington Stage has set the bar high. It will take an Olympics level effort to match its charisma and horrifying intensity. Truly this is the best of theatre in the Berkshires. And the season has just begun. Send in the clowns.