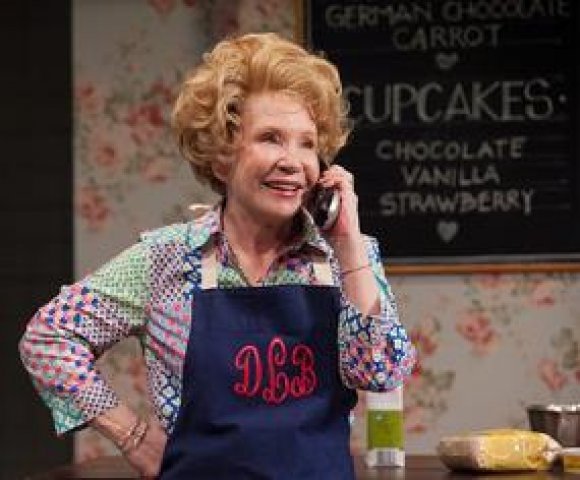 Debra Jo Rupp is a comic genius as the baker Della. 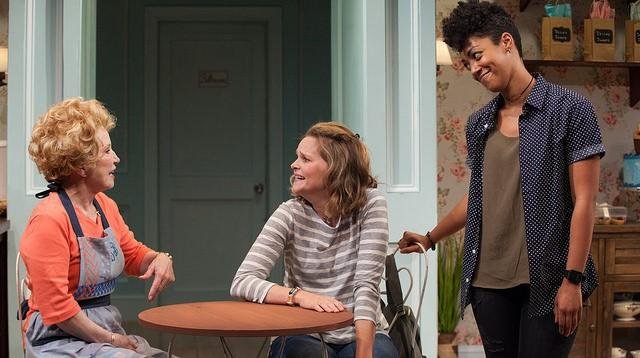 The Cake by Bekah Brunstetter couldn’t be more timely.

The morning after a Sunday afternoon opening CNN posted breaking news. “Just back after ruling in favor of a cake baker who refused to make a cake for a wedding celebration of a same-sex couple, the Supreme Court on Monday wiped away an opinion that went against a florist who declined to make an arrangement for a same-sex couple's marriage.

“In an unsigned order, the court sent the case back down to a lower court and asked it to revisit the florist's case in light of the ruling in Masterpiece Cakeshop.”

As directed by Jennifer Chambers the 90-minute, one act play teeters between a dead serious treatment of discrimination against same sex marriages by bakers and florists, and hilariously side splitting, over-the-top comedy.

We don’t know whether to laugh or cry. There is a bit of both as protagonists enact the bitter sweet resolution of sharing a tasty slice of cake.

Yet again we are astonished by the comedic skills of our very own Berkshire treasure Debra Jo Rupp. Her name on the marquee sells tickets. Overall, however, this is her pièce de résistance. Piece of cake that is. The play is a theatrical masterpiece truly befitting the political mashup of  Masterpiece Cakeshop.

Not that ditzy Della ever really said no in a headline grabbing refusal. Rather there was a meek copout of it not fitting into a fully booked schedule of October weddings. An utter perfectionist, as she explains to her engaged godchild Jen (Virginia Vale), her cakes take time and can’t be rushed. So, much as she would like to accommodate it just won’t fit in.

We first meet Della alone in the cakeshop perfectly designed by Tim Mackabee. She is busy frosting a cake while providing a running commentary on her craft. Everything is done from scratch with no skimping on artery clogging and diabetes inducing  ingredients like eggs, cream, with lots and lots of confectioners sugar and butter.

Her monologue is shockingly interrupted by the booming, God-like voice of unseen George (Morrison Keddie). From a vast field of applicants she has been chosen as one of several candidates in a reality TV baking show. Each week there is a challenge and someone gets eliminated. Della has deadpan reactions to that authoritarian voice.

The pillars of wisdom in Della’s life are equal parts Bible and cook books. In all things that means strict adherence to rules. That entails obeying what's laid down in scripture or strictly adhering to recipes.  In her tightly wound psyche there can be no deviation from the straight and narrow.

There are whoops and hollers, hugs and shows of mutual affection when, after a lapse of several years, Jen enters the shop. She last visited rural North Carolina for her mother’s funeral five years prior.

In her will Jen’s mom left $30,000 for a proper wedding ceremony. The assumption was to a fellah of which there were several. This included a short guy who was nice though the sex was not. Eventually, she found true love with  Macy (Nemuna Ceesay).

Initially Della and Jen are catching up. The mood changes when Macy enters the shop. Jen proudly announces how well organized Macy has been in planning the wedding. There is a binder with sudivided tabs. One of which is for a wedding cake. Della also has a binder with tabs. She opens it to October which is fully booked. It seems that fall foliage themed nuptials are very popular.

There are delicious increments and nuances as within a narrow range of facial expressions, body language, and drop dead, one liners Della connects the dots. She is flummoxed by the conundrum of wanting to help a young woman she loves. That's balanced by unwavering adherence to the Biblical belief that marriage is a union between man and wife.

Cleverly, the playwright, Bekah Brunstetter, has the charming, hapless, yet strong-willed Della engaged in two contests both of which overwhelm her.

Baking a winning cake is just as tough as standing up to accusations of bigotry from the outraged and righteous Macy. As a gay black woman she relates years of abuse and scorn from schoolmates to her estranged father.  With Jen she feels accepted and loved. It’s what, against all logic and instinct, has made her assent to Jen’s fantasy of getting married in conservative North Carolina.

Macy expresses so many other, better things that can be done with $30,000. That makes perfect sense but the weaker, feminine, less sophisticated Jen won’t let go of her childish fantasies. She even argues that they can find an affordable home near where she was raised. That contrasts with Macy's plan of living in Brooklyn with their lesbian friends.

In a tough exchange with Macy there is Della's argument that God instituted marriage for procreation. The irony is that Della has no children. With cruelty Macy graphically states how she and Jen enjoy fucking. She asks Della when was the last time she got laid?

That shocks Della with an indelible truth. When they failed to conceive her sex life with Tim (Douglas Rees) slowly lapsed. As happens with couples their love elided from the bedroom to the kitchen.

The truth that they haven’t made love in a decade shatters Della. She wants it back and comes up with a comical incentive. Combining baking and sex she smears her breasts with frosting and instructs Tim to lick it off. That doesn’t work but results in the comic highpoint of the play.

When off the leash this comedy is as delicious as Della's elaborate cakes.

For pure laughs The Cake is as much fun as a barrel full of monkeys. There is, however, a bitter sweet issue to explore. The challenge of this play is to find the right balance between outrageous humor and thoughtful gravitas.

It won’t take the Supreme Court to help you decide that this Masterpiece Cakeshop is exactly that. On every level the delicious performance by Debra Jo Rupp takes the cake.