Outside Mullingar By John Patrick Shanley

Drama as a Cottage Industry 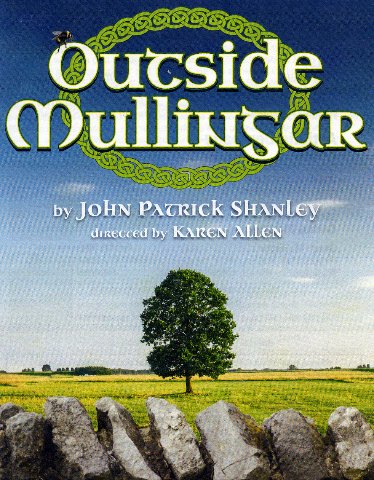 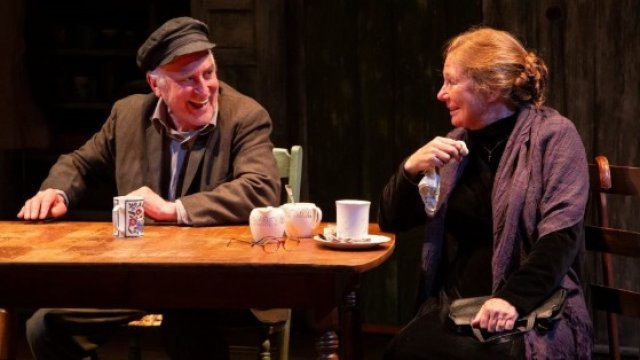 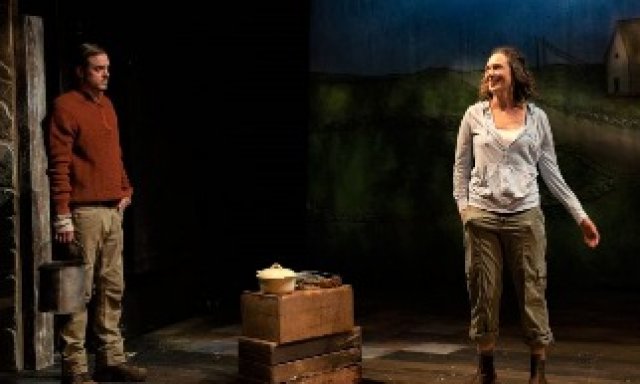 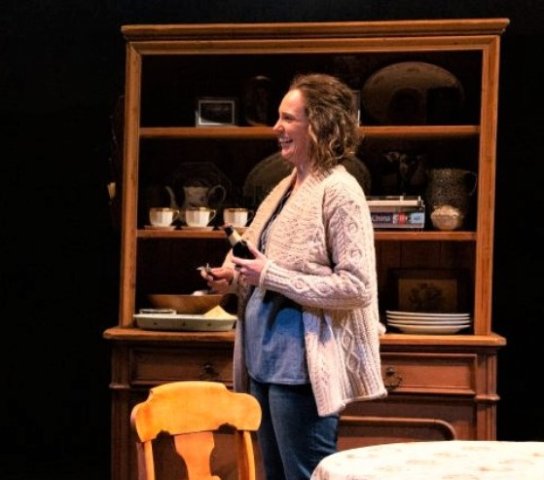 Like so much Irish theatre and literature the play by Irish American playwright, John Patrick Shanley, starts with a cup of tea after a funeral.

The setting is a vividly depicted, decrepit dining area of a squalid cottage. The texture of stone walls and the general dirt and grime are vividly enhanced by the lighting of Shawn Boyle. The design by John McDermott morphs into several settings. We are intrigued as stage hands unplug a potbellied stove and pull down a bed. That later changes into an open field and the home of Rosemary Muldoon (Shannon Marie Sullivan).

The dingy, filthy kitchen is in a vile state because the woman of the house, the unloved wife of cantankerous old Tony Reilly (Jeffrey DeMunn), passed away several years ago. His gawky almost catatonic son Anthony (James McMenamin) skulks about. The newly widowed neighbor Aiofe Muldoon (Deborah Hedwall) drops by swathed in a shawl against the generally dank weather. The widowed neighbors share a spot of tea and sympathy.

There is discussion of the dearly departed as well as legacy plans for the son and daughter of the elderly and infirm neighbors. Much of this initial dialogue is difficult to follow. The director Karen Allen has them seated around the table. The flow of the conversation is to each other and not projected out to the audience.

DeMunn, the most compelling of the four actors, projects well and it is primarly through his discussion that we follow the plot line. The brogue and manner of Hedwall may be quite authentic but we followed only bare increments of her dialogue.

While intricately crafted, and richly produced, this is a lesser work by Shanley. There is a sense of caricature to the premise and execution. The plot and dialogue feel more contrived than lived. It is an American driven fantasy of peasant life in rural Ireland. The senior Reilly plans to bypass his son and sell the farm to his brother in America. The nephew, who has an Irish passport, will marry an Irish lass and keep the farm in the family.

Reilly the younger is a bachelor with no prospects now in his mid thirties. His heart was broken by the unseen Fiona. It seems he was dumped after disclosing to her that he is a bee. When not in the cottage he’s off in nature buzzing about and talking with animals.

The inheritance plans are communicated to Mrs. Muldoon and thence to her feisty, strong-willed daughter Rosemary. It seems that she and Anthony have grown up together. When they were seven he threw her to the ground.

She was so humiliated and incensed that she prevailed upon her father to purchase the ground she was assaulted on. As a child it was deeded to her and represents the frontage of the Reilly cottage. The money exchanged was used to purchase a proper wedding ring now passed on, with no apparent purpose, to Anthony.

The writing of Shanley is clever as we follow a plot line that plays out as a ring cycle. The unraveling is absorbing but the pace of the play is incremental and sluggish.

There is nothing romantic about life in those small Irish cottages. It is no wonder that Anthony is so apathetic when at last he takes over the farm. Scratching out subsistence  and living like a hermit is indeed joyless. For which one needs a wife at the very least for companionship and sharing chores.

It’s what his father did. He chose a wife he didn’t love and they raised three children. In chilling detail he relates hardly giving her the time of day. He sees too much of his wife’s family in the heir to a farm that has been passed along for generations. Tony is a cruel and bitter man which makes all the more poignant the death scene in his bedroom. Briefly, and way too late, there is deeper understanding between father and son.

As neighbors on their small farms Anthony and Rosemary only see each other at Sunday mass. Indeed three years have passed since the funerals when he finally is discovered in front of her cottage on a rainy day. He is sweeping the area with a metal detector which she assumed was a weed whacker. The true purpose of his seeming hobby is part of the reveal that wraps the play.

If he is really a bee, best in nature and not fit for human company, she is the essence of flesh and blood. She even asks him if he ever imagines her with fewer clothes on. Might he have an interest in the shape and form under her work garments?

In her scenes, confronting first father and then son as the strong willed Rosemary, Sullivan delivers an escalating and powerful performance. She brings the best out of Anthony, who admitting to being a bee, is attracted to her as a lovely flower. In a masterfully measured performance we see McMenamin slowly unfold and come alive to the very possibility of love and passion.

Their escalating exchange includes a confession that he is indeed a virgin. The house comes down when she heartily responds “We’ll take care of that.”

Much tender and loving care has gone into evoking the ambiance of this ersatz Irish play. The music of Scott Killian greatly enhances the mood and pervasive melancholy. In a minor key this was an enjoyable evening of theatre. Particularly if one is content with simple pleasures.